Sealed Scroll is one of the four most frequently appearing high society ponies, along with Lyrica Lilac, Count Caesar, and Royal Ribbon. He has a brown coat, a wheat-colored mane, gold eyes, and a scroll cutie mark. He is unnamed in the show, but he is named in merchandise. He shares his design with "Cobalt", "Charlie Coal", "Hercules", and "Affero", and he has a similar color scheme to "Dumb-Bell".

Sealed Scroll appears mostly as a background pony, usually alongside other frequently appearing high society ponies. He first appears in The Ticket Master, during Rarity's fantasy of marrying Prince Blueblood. He later appears in Green Isn't Your Color, at both of Fluttershy's photo shoots. He also appears in Applejack's flashback in The Cutie Mark Chronicles, walking along a street in Manehattan with Lyrica Lilac, and later attending the Oranges' dinner party.

In The Best Night Ever, Sealed Scroll appears numerous times in and around the castle. During At the Gala, he is part of Rarity's and Rainbow Dash's choirs. Later, he appears in the castle foyer, the Wonderbolts' VIP area, and the ballroom.

In Sweet and Elite, Sealed Scroll makes several appearances during Becoming Popular (The Pony Everypony Should Know) and is later seen attending the Canterlot Garden Party. He appears at the beginning of Hearth's Warming Eve, at both weddings and the reception in A Canterlot Wedding - Part 2, in The Crystal Empire - Part 1 and in Magical Mystery Cure at Twilight Sparkle's princess coronation.

Sealed Scroll appears in Princess Twilight Sparkle - Part 1, as part of a panicking crowd of ponies, in Rarity Takes Manehattan in the crowd of ponies during Fashion Week, and in Pinkie Pride. In Simple Ways, he dances with "Charm" during the Ponyville Days Festival and watches the fashion show. He also appears in Equestria Games and Twilight's Kingdom - Part 2.

In Make New Friends but Keep Discord, Sealed Scroll appears once again as a guest of the Grand Galloping Gala.

Sealed Scroll is included in trading card puzzle B, appearing on the backs of the foil cards Royal Wedding Princess Celestia and Royal Wedding Princess Cadance in parts of a shot from A Canterlot Wedding - Part 2. In the collectible card game's expansion set Canterlot Nights, he is named on his own card #60 C, which gives him the description "Sealed Scroll spends far too much of his time transcribing smudged genealogy records onto new scrolls." 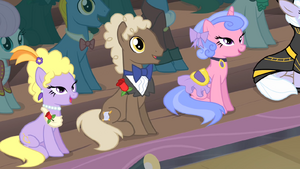