Secrets and Pies is the twenty-third episode of season seven of My Little Pony Friendship is Magic and the one hundred and sixty-sixth overall. The title is a play on the phrase "secrets and lies", which is spoken by Pinkie Pie in Party of One.

In this episode, Pinkie Pie thinks she sees Rainbow Dash throw one of her pies away and suspects that Rainbow secretly hates her pies, so she attempts to catch Rainbow in her web of lies.

This episode was previously scheduled to premiere on Canada's Treehouse TV channel on July 2, 2017 but was later replaced with a repeat of The Gift of the Maud Pie. It premiered on Treehouse on October 14, 2017 at 10:55 AM EST, thirty-five minutes prior to its scheduled airing on Discovery Family.

The scenes when Pinkie wishes Rainbow Dash a Happy 73rd and 74th Training Session respectably, National "Wake-Your-Friends Up" Day, "It's Not Your Birthday but Here's a Pie Anyway" reappears in Cakes for the Memories.

The episode begins at Sugarcube Corner, where Pinkie Pie is hard at work making a special pie to celebrate Rainbow Dash's seventy-third training session since becoming a full-fledged member of the Wonderbolts. Twilight Sparkle questions commemorating such an arbitrary occasion, but Pinkie is happy to seize any opportunity to make a pie for Rainbow because she knows how much Rainbow loves them.

Later that day, after the Wonderbolts' training ends, Pinkie Pie surprises Rainbow Dash at the Wonderbolt Academy and delivers her pie. Rainbow thanks Pinkie for the gesture and takes the pie inside the barracks with her, and Pinkie is satisfied by her friend's happiness. But when a janitor comes out of the barracks to take out the trash, Pinkie notices the pie she made sitting on top of the trash bin.

After the janitor dumps the trash in the compactor, Pinkie asks him about it, and he says he doesn't remember seeing a pie in the trash, leading Pinkie to believe she was just seeing things.

"[Rainbow Dash] loves my pies. She would never throw them away like trash in the trash with other trash, right?"
— Pinkie Pie

Later that same day, in her party-planning cave under Sugarcube Corner, Pinkie Pie dwells heavily on the pie-in-the-trash incident and starts to wonder if she wasn't seeing things. She thinks back on several past occasions and realizes every time she gave Rainbow Dash a pie, Rainbow would make her look away in the other direction, and the pies would mysteriously disappear while her back was turned. Realizing she has never actually seen Rainbow eat one of her pies, Pinkie Pie decides to launch a thorough investigation.

After piecing everything together, Pinkie Pie comes to the horrifying conclusion that Rainbow Dash doesn't like pie and has been lying to her about it for years.

Applejack stumbles into Pinkie's party-planning cave while delivering apples and finds Pinkie agonizing over her discovery. While Applejack finds the idea of Rainbow Dash hating pie ridiculous, the more she thinks about it, the more she also realizes that she has never actually seen Rainbow eating pie. Applejack tries to get Pinkie's mind off of it by asking her to make pies for her family's apple harvest, but Pinkie instead comes up with the idea of making Rainbow Dash so many pies that she will eventually admit the truth.

The next day, Pinkie Pie makes Rainbow Dash pies for when she wakes up, for her seventy-fourth Wonderbolt training session, as part of a scheme to get Rainbow to save her from the top of a pyramid of pies, and as thanks for saving her from the pyramid of pies. Unfortunately, Rainbow outsmarts Pinkie at every turn and manages to get rid of the pies without having to eat any.

Later, an increasingly crazy Pinkie Pie puts together a large pie-eating party in Ponyville, and when Rainbow arrives, Pinkie tries to get her to eat one without blinking. However, Rainbow toys with her pie long enough for Pinkie to blink, and she ties the pie to a balloon and makes it float away before Pinkie opens her eyes. Frustrated beyond belief, Pinkie openly accuses Rainbow Dash of hating her pies and lying about it, and Rainbow Dash denies it until the pie she tied to a balloon falls on Pinkie's head. Despite Rainbow's poorly-thought-out excuses and wanting to explain, Pinkie storms off in anger.

For the love of pie

At the Castle of Friendship, Rainbow Dash feels guilty for lying to Pinkie about liking pie, and Twilight and Applejack wonder if she's been lying about anything else. She defends herself by saying she knows how much Pinkie likes making pies and it would have hurt her to learn Rainbow doesn't like them. When Twilight and Applejack point out how hurt Pinkie already is, Rainbow comes up with an idea to make it up to her.

Some time later, Pinkie Pie sulks in her bedroom, and Rainbow draws her to her window with a terrible smell. Rainbow apologizes to Pinkie for lying to her all this time, and in an effort to make it up to her, she has made a giant pie to eat right in front of her – despite how disgusting it looks. Unable to watch her friend do this, Pinkie Pie stops her and finally understands why Rainbow lied: because it made Pinkie happy to see her friends enjoy her pies, and it made Rainbow happy to see Pinkie happy.

Pinkie Pie and Rainbow Dash reconcile with a hug, and Pinkie tells Rainbow that she can always be honest with her in the future.

Pinkie Pie: Okay. All we need is a dot of salt, a dab of sugar, and a spritz of ginger.
Twilight Sparkle: Uh... Are those real measurements?

Pinkie Pie: Have I ever really seen Rainbow Dash eat one of my pies? And do I always look when somepony points behind me?

Pinkie Pie: It seems the pieces of the puzzle are plopping into place, but the picture isn't pretty. [gasps] Note to self – P. Alliteration Pie.

Pinkie Pie: Rainbow Dash doesn't like pie, and she's been lying to me about it the whole time!

Applejack: I could swear I've seen her eat one of your pies before.
Pinkie Pie: Have you reeeaaally?
Applejack: Um, I... thought I had. That's why I said it?
Pinkie Pie: Are you sure?
Applejack: Maybe I haven't...?

Rainbow Dash: You sure you don't have to blink?
Pinkie Pie: Me? Nope. I'm not much of a blinker.

Applejack: Is there anything else you're lyin' about that we should know?
Rainbow Dash: No! Well, not that I can think of off the top of my head.

Rainbow Dash: I thought the hassle was worth it just to spare your feelings, but I was wrong. So to make up for it, I made this pie for you. Well, I guess I made it for me. To eat in front of you. Point is I'm eating this pie for friendship!

Pinkie Pie: In the future, you can always be honest with me.
Applejack: Uh, I could've told her that.
Rainbow Dash: [straining] Heh. Cool. H-How about this? Your hugs are too tight.
Pinkie Pie: [laughing] No, they're not. 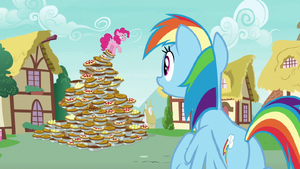