Serena is the placeholder name of a female background Earth pony with a blue coat, white mane and tail, amber eyes, and a cutie mark usually of three carrots and rarely of a pineapple.

Serena first appears in The Ticket Master throwing Twilight Sparkle up into the air during The Ticket Song. Along with the other ponies, she is surprised to learn that Twilight has an extra ticket to the Grand Galloping Gala. She appears later at Princess Celestia's party in A Bird in the Hoof. Serena appears several times throughout The Best Night Ever: in Rainbow Dash's fantasy in At the Gala and in the Canterlot castle ballroom.

As of season two, Serena appears in the opening sequence riding the Friendship Express train. In Luna Eclipsed, she briefly appears running away from the Ponyville square as the town descends into chaos during Princess Luna's visit.

In season three, Serena appears in the crowd outside the Golden Oak Library complaining to Twilight about Pinkie Pie's clones in Too Many Pinkie Pies. She also appears very briefly at the beginning of Sleepless in Ponyville standing next to Warm Front.

In season four, Serena appears in Canterlot during preparations for the Summer Sun Celebration in Princess Twilight Sparkle - Part 1. In Three's A Crowd, she visits the Star Swirl the Bearded Traveling Museum in a Star Swirl costume. Serena also appears in Cheese Sandwich's flashback in Pinkie Pride, carries a sword across the Rainbow Falls Traders Exchange in Trade Ya!, spectates the Games in Equestria Games, and has an unfortunate encounter with Lord Tirek in Twilight's Kingdom - Part 1.

In season five, Serena appears with a pineapple cutie mark in The Cutie Map - Part 2 among the ponies of Our Town when they reclaim their cutie marks. She appears as a guest of the Grand Galloping Gala again in Make New Friends but Keep Discord and watches the Wonderbolts' aerial practice in Rarity Investigates!

In season six, she appears in Spice Up Your Life.

In season nine, she appears in Sparkle's Seven and The Last Laugh.

In the IDW comics' My Little Pony Micro-Series Issue #5, Serena appears on page 12 selling carrots in the Ponyville marketplace. 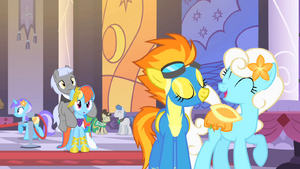