My Little Pony Friendship is Magic Wiki
Register
Don't have an account?
Sign In
Advertisement
in: Pages that need copyediting, Pages that need improvement, Unicorn ponies,
and 2 more

Shadow Lock is a male unicorn pony and reformed antagonist who first appears in the From the Shadows story arc of IDW comics' My Little Pony: Friendship is Magic.

Shadow Lock resembles "Written Script". In response as to whether Shadow Lock's design was provided by Hasbro or was original, artist Tony Fleecs answered "Original."[1]

James Asmus has stated regarding Shadow Lock, "I tried to make this new pony an intriguing, formidable, and ultimately a rounded, understandable villain. We get more chances to understand the character as the arc goes on. I will say the character is more of a 'a mare on a mission' than a would-be Equestria conqueror."[2]

In My Little Pony: Friendship is Magic Issue #51, Shadow Lock infiltrates the Castle of Friendship library, only to be discovered by Twilight Sparkle and Spike. He escapes with several books which Twilight later discovers are history texts. Twilight and her friends trail Shadow Lock and discover that his magic can erase knowledge from both books and the minds of their readers. Having acquired a library card from another pony, Shadow Lock goes to check out more books to erase, only to be confronted by Twilight and her friends. To counter them, he unleashes several monsters from within the pages of the library's books.

In My Little Pony: Friendship is Magic Issue #52, Shadow Lock uses the monsters as a distraction to erase the contents of more books. He also explains to Twilight that his goal is to prevent the resurgence of a historical threat to Equestria. Shadow Lock makes his escape after summoning more monsters, but Twilight and the others are able to send them back into their respective stories. He continues to erase more historical records despite the ponies splitting up to engage him at various locations. Shadow Lock then traps Twilight's friends in various magically animated exhibits at the Canterlot Museum, his latest target, before being confronted by Twilight.

In My Little Pony: Friendship is Magic Issue #53, Shadow Lock reveals to Twilight that some time ago he learned that he was descended from the evil he mentioned previously. Fearing its return and his own corruption by it, he turned to studying word magic in order to eliminate all record of this threat. However, Twilight points out that his efforts have erased his own memories, and helps him realize that destroying knowledge of a threat won't make it disappear. Now aware of the error of his ways, Shadow Lock apologizes to Twilight and her friends, and departs to find information to help fight his ancestor.

In My Little Pony: Nightmare Knights Issue #4, Shadow Lock appears on page 14, watching the end of the magic duel between Trixie and Twily.

Shadow Lock is also depicted in a photograph on My Little Pony: Friendship is Magic Issue #100 cover RE.

Shadow Lock is a character in Gameloft's mobile game. His in-game description states, "Haunted by the past, this pony sought to blot out all memory of the ancient villain he was descended from... but learned that history is better understood than erased." The Literary Whirlwind decor item is also modeled after him. He is also mentioned during the "Nightmare Night at the Museum" event, in which Starlight Glimmer attempts to undo the lingering effects of his magic with her Reverie of Reversal, only to bring various museum exhibits and stories to life.

Shadow Lock is initially characterized by a crippling fear of the evil he is descended from, particularly the notion of its return or his own corruption by it. His dread of these perceived eventualities led him to the single-minded pursuit of his goal, which was to eliminate all record of the evil. Shadow Lock's fear was so great that he was willing to use any means to achieve his ends, from breaking into the Castle of Friendship to unleashing various threats from inside books despite the danger to various bystanders.

Ultimately, however, Shadow Lock proves open to rational argument, particularly upon realizing that he may have inadvertently destroyed knowledge of how to defeat the evil he feared should it ever return.

"You?! You brought friends? Well, you won't be able to stop me—when I can call any monster from these pages to fight back!"
— From the Shadows, Part 1

"There is something... too dangerous in Equestria's history to even speak of! A darkness that would stampede its way back if it could! I have to erase any record of it—any memory!"
— From the Shadows, Part 2

"If this history repeats himself—doomed is definitely the right word. For what it's worth—I'm sorry, princess."
— From the Shadows, Part 2

"I let myself get so scared of the darkness that I didn't even see the damage I was causing now."
— From the Shadows, Part 3 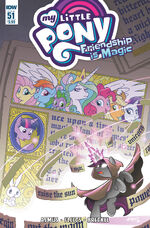 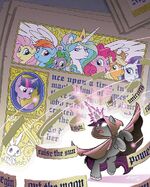 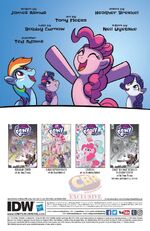 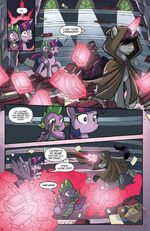 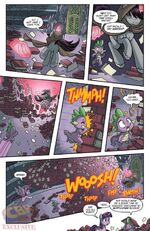 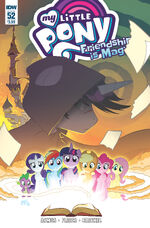 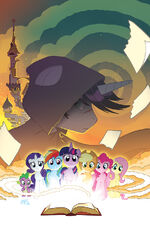 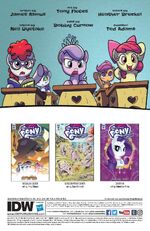 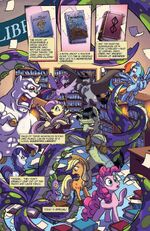 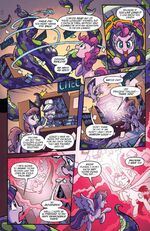 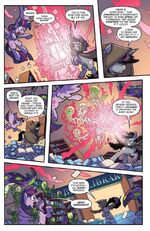 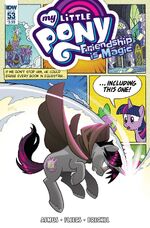 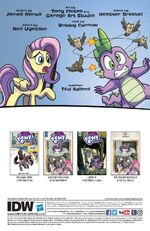 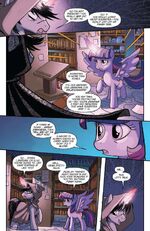