View source
watch 00:30
My Little Pony - Shadow Play Promo
Do you like this video?
Play Sound

Shadow Play - Part 1 is the twenty-fifth episode of season seven of My Little Pony Friendship is Magic and the one hundred and sixty-eighth overall. It is the first part of a two-part season finale.

In this first part, Sunburst discovers Star Swirl the Bearded's lost journal, and Twilight Sparkle becomes obsessed with saving him from a thousand-year-old prison.

Joanna Lewis and Kristine Songco came up with the idea of bringing back the Pony of Shadows.[4]

According to episode co-writer Josh Haber, the show staff originally planned for the finale to premiere before the release of My Little Pony The Movie.[5]

The episode begins with narration by Star Swirl the Bearded explaining how he and five other ponies were brought together to maintain and spread the virtues of strength, bravery, healing, beauty, hope, and sorcery—to serve as Equestria's "pillars". But when the pony who brought them together was believed to be covetous of the Pillars' power, they cast him out. The pony thus turned to darkness for power and revenge, and transformed into the Pony of Shadows. In order to stop the beast, the Pillars sacrificed themselves and left behind a seed that would eventually grow into the Tree of Harmony and protect Equestria in their absence.

The story then cuts to the throne room at Canterlot Castle, where Sunburst finishes reading Star Swirl's last known journal entry in the book he acquired in the previous episode. Princess Celestia and Princess Luna are surprised to learn what became of their old teacher after he vanished, and Twilight Sparkle and her friends are shocked to learn that not only their favorite ponies of legend but also the Pony of Shadows are real. Curious about where the Pillars went after they defeated the Pony of Shadows, Twilight and Sunburst decide to apply their knowledge of ancient Equestrian history to decipher the rest of Star Swirl's writings.

After three days of research and cross-referencing, Twilight and her friends have made little progress in deciphering Star Swirl's writings, largely due to their illegibility. Fortunately, Starlight Glimmer is able to make out the hard-to-read journal scrawlings, and the ponies learn that the Pillars of Old Equestria's final stand against the Pony of Shadows took place at the Temple of Ponhenge.

The ponies travel to the ancient temple of Ponhenge and find several rock formations with magical runes carved into them. When Twilight places Star Swirl's journal on one of the rock platforms, it activates an old holographic recording of Star Swirl, Rockhoof, Mistmane, Flash Magnus, Somnambula, and Mage Meadowbrook. In the recording, the Pillars of Old Equestria use talismans of the elements they each represent to seal away the Pony of Shadows, sacrificing themselves in the process.

After deciphering more of Star Swirl's writings, Twilight learns that the Pillars of Old Equestria used a spell to trap the Pony of Shadows in limbo—a space between worlds where time stands still. However, in order to imprison him for good, the Pillars had to trap themselves with him. With her knowledge of how Star Swirl's banishment spell works, Twilight believes she can set him and the other Pillars free.

In order to accomplish this, the Mane Six need to retrieve the magical artifacts and talismans that the Pillars used to imprison the Pony of Shadows: Rockhoof's shovel, Mistmane's everlasting flower, Flash Magnus' shield, Mage Meadowbrook's mask, and the blindfold Somnambula wore during the trial of the sphinx. The Cutie Map suddenly activates and shows the Mane Six where to find these items.

Applejack retrieves Rockhoof's shovel from an archaeological dig at his old island home. Rarity retrieves Mistmane's flower from her old village and helps an elderly descendant of the village's residents restore her family garden. Rainbow Dash and Spike retrieve Flash Magnus' shield from the Dragon Lands when Garble is revealed to be using it as a surfboard. Fluttershy retrieves Meadowbrook's mask from Cattail in the Hayseed Swamp. Finally, Pinkie Pie retrieves Somnambula's blindfold from the pyramid outside the desert village with the help of Daring Do.

Back at Ponhenge, Twilight, Starlight, and Sunburst make the last necessary preparations to cast Star Swirl's spell. Starlight expresses her misgivings about going through with the ritual, saying Star Swirl and the Pillars knew what they were doing and things should be left alone. Twilight and Sunburst argue, however, that saving the greatest ponies of legend from a thousand-year-old prison is too important to ignore.

When the rest of the Mane Six return with the talismans, Twilight arranges them and Star Swirl's journal in a hexagonal pattern on the rock formations of Ponhenge. Twilight, Starlight, and Sunburst then use their magic to cast Star Swirl's spell, and the magic between the six talismans successfully releases the Pillars of Old Equestria from limbo. When Star Swirl the Bearded regains consciousness and Twilight—starstruck at meeting her magical idol—tells him what she and her friends have done, Star Swirl becomes instantly distressed. He demands they undo what they've done and put them back, but Twilight says they can't.

"You cannot bring only the Pillars back!"
— Star Swirl the Bearded

As dark clouds gather in the sky, a black, amorphous creature comes into being, taking the form of a large horned pony with wings of smoke. Twilight's spell has brought back not only the Pillars of Old Equestria but also the evil Pony of Shadows.

Rainbow Dash: Uh... So, the Pony of Shadows was really real?

Applejack: All those legendary ponies were real, too? And they went off with Star Swirl to face the Pony of Shadows, and then none of them were ever heard from again?
Pinkie Pie: Uh, yeah. Weren't you listening?

Sunburst: Solving a thousands-year-old mystery could take forever! Think of the research! The re-reading! The re-re-reading!

Twilight Sparkle: Star Swirl!? I... I've wanted to meet you my whole life! I can't believe you're here!

Pinkie Pie: [to Twilight] Well, you did ask for a magical explanation.

Twilight Sparkle: Star Swirl and the rest of the Pillars sacrificed themselves to save Equestria.

Starlight Glimmer: It's amazing to think one of the greatest mysteries of Equestria was solved with a musty old book from an antique shop.
Sunburst: But I wouldn't say the mystery's solved. Star Swirl's spell was one of the most powerful feats of magic in all of history. It'll take years of study before we fully understand it.
Twilight Sparkle: I think I understand Star Swirl's spell!

Rarity: Darling, your diorama!
Twilight Sparkle: I made more!

Applejack: You'd be savin' all the Pillars, right? A-And they disappeared ages ago.
Twilight Sparkle: That's the thing about limbo. It isn't one place or another. It's in between, so time stands still. If we can pull them out, it'll be like they never left.

Professor Fossil: I love old legends as much as anypony. But a pony strong enough to save a village from rushing lava with a shovel is... preposterous.

Professor Fossil: I can't believe you just did that. Y-You saved us!
Applejack: I bet if you told somepony else the story, it might sound... [gasps] "preposterous".

Rarity: Perhaps it just seemed like your gardens were worthless. But a little pruning can work wonders. Of course you will have to look after more than just one flower now.

Garble: Lord Ember only commanded us to be nice to ponies. She never said anything about pony-loving dragons.

Garble: Hey! That's mine!
Spike: Finders keepers, remember?
"Billy": See, because that's what you said to them when they first showed up—

Cattail: You know, you didn't have to help with this. I would've lent you the mask anyway.
Fluttershy: I know. [giggles] But I couldn't leave without helping.

Pinkie Pie: This old blindfold was stuck in the drain.
Daring Do: Weren't you looking for a blindfold?
Pinkie Pie: Oh, yeah!

Twilight Sparkle: I can't believe I'm gonna meet Star Swirl the Bearded! You know, outside of my dreams.

Starlight Glimmer: I'm all for pushing the envelope, obviously, but this is pretty out there for you, Twilight.
Sunburst: What's "out there" about saving the most legendary ponies of all time from a thousands-year-old prison?
Starlight Glimmer: Well... nothing when you say it like that. Unless "the most legendary ponies of all time" knew what they were doing, and we shouldn't mess with it.

Twilight Sparkle: You and the others have been trapped in limbo for over a thousand years, but I figured out how to get you ho—
Star Swirl the Bearded: What?! No, no, no, no! You must undo what you've done! 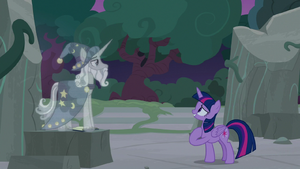