Shadow Play - Part 2 is the twenty-sixth episode of season seven of My Little Pony Friendship is Magic, the one hundred and sixty-ninth overall, and the last to take place before My Little Pony The Movie. It is the second part of a two-part season finale.

In this second part, Star Swirl the Bearded and the other Pillars of Old Equestria are back from limbo, and Twilight Sparkle and her friends must work with them to defeat the Pony of Shadows.

For their work on this episode, Marcel Duperreault, Todd Araki, Jason Fredrickson, Adam McGhie, Christine Church, Kirk Furniss, and Roger Monk were nominated for a 2018 Leo Award for Best Overall Sound in an Animation Program or Series.[4]

The Pillars of Old Equestria are intent on stopping the Pony of Shadows before he gets all of his strength back. After hearing how accomplished the Mane Six are in dealing with threats such as Discord, Queen Chrysalis, and King Sombra, they decide to team up with them—though Star Swirl is skeptical of their accomplishments and bitter toward Twilight for undoing his banishment spell.

Search for the darkness

In order to locate the Pony of Shadows, the Mane Six take the Pillars to the Castle of Friendship, a byproduct of the Tree of Harmony that grew from the seed they planted long ago. Without the Temple of Ponhenge, they decide to use the Tree's magic to send the Pony of Shadows back to limbo, which would require sacrificing the Elements of Harmony. Twilight tries to dissuade Star Swirl from making such a sacrifice, but he is dismissive of her input.

Using the Cutie Map, the ponies seek out the darkest places in Equestria that the Pony of Shadows can draw power from. Meanwhile, Twilight looks for a solution in the castle library, feeling regret for unleashing a great evil upon Equestria just to meet her idol. She soon finds a portal spell that could banish the Pony of Shadows to limbo without sacrificing the Pillars. Starlight Glimmer suggests a solution that doesn't involve banishment, but Twilight is confident in Star Swirl's plan and wants to prove herself to him.

Once a villain, always a villain

As the ponies wonder where the Pony of Shadows is hiding, the Mane Six's cutie marks suddenly start to glow, and the Cutie Map points them toward a remote, abandoned region of Equestria called the Hollow Shades. After finally giving Twilight some praise, Star Swirl leaves to prepare the new banishment spell while the others prepare for battle. Like before, Starlight Glimmer opts for a more peaceful solution than banishment, but Star Swirl refuses to consider it, saying "Once a villain, always a villain."

With Star Swirl and Twilight refusing to listen, Starlight asks the other Pillars about the Pony of Shadows. Long ago, the beast was originally a unicorn named Stygian, who brought the Pillars together against the threat of the Sirens. As the Pillars were hailed as heroes, the ordinary Stygian became jealous of their abilities and stole artifacts from them for a spell. The Pillars cast him out as punishment for his actions. When Stygian later appeared before them again, he was consumed by darkness and revenge and became the Pony of Shadows. When asked what spell Stygian was trying to cast, the Pillars admit they don't know for sure, but they believe it was to steal their powers for himself.

Starlight approaches Star Swirl and Twilight again, still curious about Stygian's true motives back then. When Star Swirl asserts that Stygian was driven purely by envy and that there is no return from the path he chose, Starlight argues that she herself is living proof of the contrary. She tries to convince Twilight that the map is calling her and her friends for a friendship problem, but Star Swirl maintains there is no way to befriend a pony like Stygian.

"I guess I'm lucky your idol wasn't around when you decided to be my friend. I might've been banished to limbo, too."
— Starlight Glimmer

In the Everfree Forest, Star Swirl extracts the Elements of Harmony from the Tree of Harmony, calling them a necessary sacrifice to banish the Pony of Shadows. With the Elements still attuned to Twilight and her friends, the Mane Six and Pillars team up in pairs to use their magic.

Out of the shadows

Upon reaching the Hollow Shades, the Mane Six and Pillars challenge the Pony of Shadows. They are suddenly dragged underground to the Well of Shade, where Stygian had originally become one with the darkness, and the Pony of Shadows appears before them. The beast bears contempt toward the Pillars for turning their backs on him, and Twilight starts to believe Starlight was right about this being a friendship problem. The ponies cast their spell and open a portal to limbo, and the Pony of Shadows starts getting dragged inside.

Before Twilight can complete the spell, she sees Stygian's true form sticking out of the Pony of Shadows' body, and she flies inside. At the depths of the darkness, Twilight finds Stygian despairing over his friends' betrayal. When Twilight claims he betrayed the other Pillars by trying to steal their power, Stygian argues that he only wanted the Pillars' respect. Wishing to help them in their battles, he took their artifacts so he could replicate them and become a Pillar as well; the Pillars hear this and realize how wrong they were. The darkness inside Stygian starts to consume him again, but Twilight offers to help him overcome it, and Starlight enters to support her.

The Mane Six and Pillars of Old Equestria work together to free Stygian from the darkness, and the darkness is banished to limbo. Because the ponies used the Elements of Harmony for healing instead of banishment, the Elements remain intact. Star Swirl apologizes to Stygian for letting pride cloud his judgment and driving him away, and he thanks Twilight for helping him and his fellow Pillars see the error of their ways. The Mane Six's cutie marks glow again, indicating a successful friendship mission.

Some time later, in Canterlot, Star Swirl reunites with his old pupils Princess Celestia and Princess Luna. The princesses ask Star Swirl to stay and teach magic again, but Star Swirl decides to travel and see how much Equestria has changed before settling down in one place. In addition, the other Pillars wish to see what has become of their old homes. Celestia hopes that the Pillars will return on occasion to share wisdom of their experiences, and Star Swirl points to Twilight in recognition of her own wisdom on the Magic of Friendship.

As the ponies and Pillars come together for a group hug, Twilight thanks Starlight for helping her look past her idol worship and see things clearly in the end.

Star Swirl the Bearded: Know this, fiend! We will not rest until we find a way to return you to limbo!
Pony of Shadows: [growls] Never! Your days of glory are through, Star Swirl. Now my dark power will reign, and you six will bow to me!

Mage Meadowbrook: We had no idea our small seed would bloom into the living spirit of the land. I am glad our mantles have passed to such capable ponies.

Twilight Sparkle: Star Swirl knew what he was doing when he cast that spell. If I can make it even better, maybe he'll see that I take magic as seriously as he does.

Star Swirl the Bearded: While I appreciate your enthusiasm, Twilight, this is hardly the time to take risks on half-baked spells.

Rarity: The only time the map's called all of us to one place was Starlight's village.
Rainbow Dash: So it's like a super-villain tracker!

Star Swirl the Bearded: Stygian wants to destroy all that is good in this world. There's no way to befriend a pony like that.

Star Swirl the Bearded: We did what we had to do. You tried to steal our powers for yourself.
Pony of Shadows: No! It was you who were selfish! And now you will pay!

Stygian: Even if my friends did still care, what makes you think you have the power to help me?
Starlight Glimmer: Because it's what she does. I wasn't so different from you, and Twilight helped me change. If there's one pony in Equestria that can save a friendship, it's her.

Star Swirl the Bearded: Thank you for helping us see the errors of our ways, Twilight. It seems I never accounted for the Magic of Friendship.
Twilight Sparkle: Thank you, Swirlstar! Uh, Star Swirl!

Star Swirl the Bearded: I simply cannot believe how tall you've gotten!
Princess Celestia: Well, it has been over a thousand years. Will you stay here and teach magic once again? My sister and I have such fond memories of your lessons.
Princess Luna: As long as you don't ask for those essays we owed you before you disappeared.

Star Swirl the Bearded: If it is wisdom you seek, look no further than your own pupil. She showed me that the power of friendship is a magical force indeed. And that in turning away from others, you hurt yourself as well.

Twilight Sparkle: It's funny. I thought meeting my idol would give me all the answers I ever wanted. But instead, I forgot what I already knew. Good thing I had a student of my own to remind me. 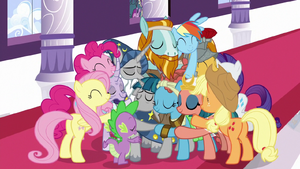