For the identically-named group created by Nightmare Moon, see Shadowbolts.

The Shadowbolts are a team of human students who attend Crystal Prep Academy in the human world. They appear in the film My Little Pony Equestria Girls: Friendship Games, the half-hour special Dance Magic, and the IDW comics' My Little Pony Annual 2013. Members of the Shadowbolts include Twilight Sparkle, Sour Sweet, Sunny Flare, Sugarcoat, Lemon Zest, Indigo Zap, and several unnamed soccer players.

The Shadowbolts are similar to Canterlot Wondercolts. Unlike the pony Shadowbolts created by Nightmare Moon, the human Shadowbolts have no known connection to Vice Principal Luna.

Throughout the film, the Shadowbolts display egotistic and snobbish behavior toward both the students of Canterlot High and each other—with the exception of Twilight Sparkle. They deny Twilight a seat on the Crystal Prep Academy bus, antagonize the Wondercolts during the gymnasium party, and show a lack of enthusiasm at their fellow students' success. However, they briefly mingle more sociably with the Wondercolts during the party before Principal Cinch intervenes, and they end up on much friendlier terms with the Wondercolts by the end of the film.

In Pinkie Spy, Rainbow Dash and Pinkie Pie sneak onto Crystal Prep school grounds to spy on the Shadowbolt track team as they train.

In Steps of Pep, Shadowbolt athletes compete against their Wondercolt counterparts in soccer. The Wondercolts win by a score of 2-1.

In Pinkie Pie: Snack Psychic, members of the Shadowbolt swim team appear as patrons at the Sweet Snacks Cafe, discussing their loss and getting pointers from Rainbow Dash. In the Rainbow Dash ending of Fluttershy's Butterflies, the Shadowbolt soccer team competes against the Wondercolts as Fluttershy commentates.

In the second season, the Shadowbolts compete against the Wondercolts in soccer in Sock It to Me. In all three endings, the Wondercolts win by a score of 3-2 as Rainbow Dash scores the winning goal with a borrowed sock to replace her missing lucky sock.

In the My Little Pony Annual 2013 Equestria Girls story, Crystal Prep's Shadowbolts (identified only by their team name) play soccer against Canterlot High School's Wondercolts in the first game of the season.

"Unleash the magic, unleash the magic
We're not friends here after all
Our only interest in this business
Is seeing Canterlot High School fall"
— My Little Pony Equestria Girls: Friendship Games 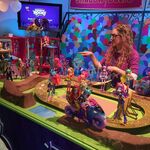 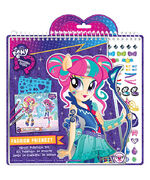 Retrieved from "https://mlp.fandom.com/wiki/Shadowbolts_(EG)?oldid=2114033"
Community content is available under CC-BY-SA unless otherwise noted.