Shady Daze is the placeholder name of an Earth pony colt who first appears in the season two episode The Cutie Pox. He has a light blue coat, two-tone dark blue mane and tail, and blue eyes.

Shady Daze shares his design with Button Mash, "Caramel Coffee", "Green Daze", and Strike, and depending on the angle, he shares his mane style with Scootaloo and Archer.

Shady Daze first appears outside the Ponyville Schoolhouse receiving lessons on loopty-hooping from Apple Bloom in The Cutie Pox. He later appears playing a peasant among other Earth ponies in the pageant in Hearth's Warming Eve. In The Last Roundup, Shady Daze briefly appears between Shoeshine and Lucky Clover at the Dodge Junction train station.

In Ponyville Confidential, Shady Daze makes his first speaking appearance. He operates the printing press for the Foal Free Press, and at the end of the episode, he is promoted to staff photographer.

Shady Daze appears again as a photographer during the Summer Harvest Parade in One Bad Apple.

In Slice of Life, Shady Daze appears at Cranky Doodle Donkey and Matilda's wedding. In Crusaders of the Lost Mark, he appears by the Ponyville Schoolhouse during the vote for Student Pony President. In The One Where Pinkie Pie Knows, Shady Daze celebrates his birthday party and receives a cake from Pinkie Pie with five candles on it.

In The Cart Before the Ponies, Shady Daze appears at the Ponyville Schoolhouse during the physics class for the upcoming Applelwood Derby, and later leaves the schoolhouse with Twist.

In Forever Filly, Shady Daze appears in a photo from "Ponyville Confidential" at the Cutie Mark Crusaders' clubhouse on their wall of helped ponies.

Shady Schoolpony is a character in Gameloft's mobile game. The game's description of him states, "This colt runs the school paper's new printing press. When there's news, he's the first to know -- no need to guess!" 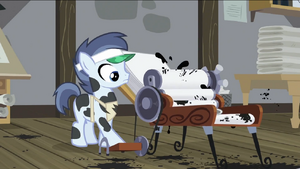