She's All Yak is the seventh episode of season nine of My Little Pony Friendship is Magic and the show's two hundred and third episode overall.[1] The title is a play on the expression "she's all that" and a reference to the 1999 film She's All That, which, itself, was a "modern retelling" of the Bernard Shaw play Pygmalion.

In this episode, Sandbar asks Yona to a pony dance, so she goes to Rarity and her friends for a makeover in appearance and personality. An event based on the episode, while also serving as a follow up to The Last Problem, was included in Gameloft's mobile game.

According to Jim Miller, the placeholder music used for the animatic of the ending yak dance scene was "Bodies" by Drowning Pool.[2]

At the School of Friendship, Twilight Sparkle announces the revival of one of Ponyville's oldest traditions: the Fetlock Fete, a pony-centric dance party. For the sake of all-inclusiveness, Twilight is dubbing the event the "Amity Ball" and inviting all creatures to attend. In addition, the dance will feature old Fetlock Fete traditions such as the Pony Pal Contest and potluck dinner.

As Twilight and her students leave to hang up posters for the dance, Sandbar asks Yona if she wants to go to the dance and enter the Pony Pal Contest with him. Yona is uncertain because the dance is traditionally focused on ponies, but Sandbar says that does not matter, wanting them to just have fun together. Yona accepts, much to Sandbar's delight, and he leaves to buy the contest tickets. As Yona wonders how to be the best "pony pal", Rarity passes by with dresses she is preparing for the dance, leaving Yona worried that she has a lot to learn.

Yona meets with Rarity at Carousel Boutique and asks for help on presenting herself at the Amity Ball like a pony would, including what to wear and how to act. With a mouthful of Brussels sprouts, Rarity teaches Yona how to articulate and enunciate her speaking. She tries to find a look that will make Yona stand out, but Yona says she wants to fit in, and Rarity attempts to accommodate her wishes through the song Fit Right In.

Later, Fluttershy and Rainbow Dash help Yona learn the steps for two traditional pony dances: the slower "pony cotillion" and the faster "pony prance", both of which are a drastic departure from the wilder yak dances that Yona is accustomed to. At Sweet Apple Acres, Applejack and Pinkie Pie help Yona prepare something for the potluck dinner. After several days of hard practice, Yona has mastered speaking and dancing like a proper lady.

Some time later, the School of Friendship's Amity Ball begins, with Spike providing music as "DJ Scales-n-Tail". Sandbar's friends tell him that their teachers have been helping Yona get ready for the dance all week. When Yona arrives, they behold the fruits of their hard work: Yona is elegantly dressed and speaking like a high-class pony. Sandbar tells Yona she did not need to go to so much trouble, but Yona feels satisfied that she is finally fitting in.

Spike begins the pony cotillion, and Yona invites Sandbar to the dance floor. The dance starts out well enough, with Sandbar impressed by how much Yona has learned, but she briefly trips over her own dress, having not practiced dancing while wearing one. As soon as she recovers, Spike moves on to the pony prance. As with before, Yona and Sandbar have fun dancing at first. However, Yona's pony wig falls over her eyes, and in her state of blindness, she stampedes out of control, knocking over everyone and everything in her path.

Heartbroken over the mess she caused and feeling like she failed to act like a proper pony, Yona leaves the dance in tears.

At the Treehouse of Harmony, Yona sings a sad song to herself in her solitude. When Sandbar comes looking for her, Yona is so mortified by what happened that she refuses to leave the treehouse. She fears she disappointed Sandbar by being a terrible pony – and a terrible "pony pal" by extension. Sandbar says he does not care whether Yona is a good pony or a bad pony; he asked her to go to the dance with him because he appreciates her as the "best Yona" she already is. Yona hugs Sandbar and agrees to return to the dance with him.

Sandbar and Yona return to the school as their friends, teachers, and fellow students clean up the mess. Yona apologizes for ruining the Amity Ball, but Rarity and her friends take the blame for trying to turn Yona into someone she is not. When Yona forgives them and says Sandbar helped her feel better, Twilight declares the two of them the winners of the Pony Pal Contest for exemplifying friendship.

Spike and the students ask Yona to teach them the "crazy dance" she was doing before she left, and Yona happily obliges. The episode ends with everyone in the school following Yona's lead in the "Yakyakistan Stomp".

Sandbar: Hey, Yona, want to be my pony pal? We can enter the contest together.
Yona: But Yona yak. Yona not pony.
Sandbar: So?
Yona: Pony, pony, more pony.
Sandbar: Aw, that's just a poster. Come on! It'll be tons of fun together. Promise.

Yona: Yona interrupting?
Rarity: Oh. [laughs] Well, not interrupting exactly. More like blocking the flow— uh, stopping me from what I'm doing— so, yes, interrupting! [nervous laugh] Now, what can I do for you, Yona?

Yona: Uh... Rainbow Dash and Fluttershy good at dancing?
Rainbow Dash: Don't be so surprised. I'm awesome at everything! Except for baking.

Gallus: I'm just glad I'm here with you guys. Least I'm not the only non-pony in the crowd.
Sandbar: You're not still worried about that, are you? Like Headmare Twilight said, this is a dance for everycreature. There's no pony pressure.

Yona: [elocuting] How kind of you to ask me to this soiree, Sandbar.
Gallus, Ocellus, Silverstream, and Smolder: Uhh...
Smolder: What?
Silverstream: You look so weird!

Yona: Sandbar mean something awful and embarrassing. So awful, Yona cannot come down from treehouse ever!
[whirring]
Yona: Will Sandbar bring Yona food and water?

Yona: Yona just want to do all the right pony things and fit in at dance! Then maybe Sandbar and Yona win best pony pals contest. Instead, Yona win worst pony ever.
[crunch]
Sandbar: That's not true.
Yona: Really? Sandbar, name two ponies worse than Yona.
Sandbar: Cozy Glow and Sombra.
Yona: [chuckles] Okay, Sandbar right. They worse.
Sandbar: Yona, it doesn't really matter if you're a great pony or a horrible pony. You're the best Yona I know. That's why I asked you to the dance. 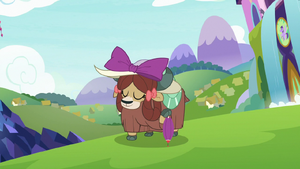