She Talks to Angel

When Fluttershy and Angel's relationship hits the skids, Zecora gives them a potion to help them understand each other.

The pony and the bunny

At Fluttershy's Sweet Feather Sanctuary, Fluttershy holds a support group for the animals living there, who are split into two groups of predator and prey. As Fluttershy tries to settle differences between the two sides over what to eat and what not to eat, Angel constantly interrupts the meeting over a desire to be heard.

After an agreement is reached for the predators to only eat vegetables while staying at the sanctuary, Angel antagonizes a wolf named Sandra, causing a large brawl to break out among all the animals in the support group. Dr. Fauna and Zecora arrive with a new animal to welcome into the sanctuary: a gecko that breathes smoke. When Zecora notices Fluttershy and Angel not getting along, she offers to help fix their strained relationship, though Fluttershy insists they get along fine.

Fluttershy goes through her long to-do list of helping the gecko integrate into the animal community and giving the predator animals alternate food choices so that they leave the prey animals alone. All the while, Angel seeks attention from her and bothers her for petty and selfish reasons and she ignores him. Their disagreement soon comes to a head over Fluttershy neglecting Angel for her many responsibilities and Angel's inability to communicate with anyone except her. Realizing the strain this is causing to their relationship, they decide to see Zecora after all.

At Zecora's hut, Fluttershy and Angel try to get to the root of their relationship troubles. Fluttershy says Angel constantly distracts her from her duties at the sanctuary and the School of Friendship, and Angel—with Fluttershy serving as his interpreter—says Fluttershy constantly ignores him, despite being the only pony who can understand him. To help them through this, Zecora brews a pair of potions for them to drink and tells them to wait until they are alone at home before doing so.

On their way home, Angel is excited to drink Zecora's potions with Fluttershy, wanting to make a tea party out of the occasion. But when Fluttershy worries about her sanctuary duties, Angel gets impatient, immediately drinking one potion and urging Fluttershy to drink the other. When Fluttershy drinks the other potion, the potions' magic causes her and Angel to switch bodies.

Fluttershy, stressed over this development, desperately wants to switch back so she can finish her sanctuary duties, but Angel refuses as he is finally able to talk with other ponies. Believing this was not the intended effect of Zecora's potion, Fluttershy decides to go back to Zecora's hut and get another potion to turn herself and Angel back to normal. She tells Angel to finish her chores at the sanctuary in the meantime, and when Angel once again refuses, Fluttershy uses the Stare to compel him.

A mile in each other's hooves

Back at the Sweet Feather Sanctuary, Angel addresses Fluttershy's long list of chores with complete indifference and terrorizes Sandra the wolf after their earlier scuffle. His overall disinterest in Fluttershy's tasks dissatisfies the sanctuary animals and causes a snake named Antoine to express hungry interest in a baby elephant named Muriel.

Meanwhile, Fluttershy makes her way into the Everfree Forest and runs into Twilight Sparkle and Spike. As a result of being stuck in Angel's body, Fluttershy is unable to communicate with her friends, it takes her more time and effort to travel long distances, and the forest predators present a greater danger. Even when she finally reaches Zecora, Fluttershy cannot communicate her and Angel's body-swap dilemma. Zecora, sympathizing that Angel only has one pony in the world he can talk to, suggests that he and Fluttershy apologize to each other.

As a result of Angel's carelessness in finishing Fluttershy's chores, Antoine the snake devours Muriel the baby elephant whole, and the sanctuary descends into utter chaos, leaving Dr. Fauna completely puzzled by "Fluttershy"'s odd behavior. Fluttershy finally makes it to the sanctuary, but the journey leaves her severely exhausted. Dr. Fauna explains that concentrated carrot extract can restore "Angel"'s health, but the carrot extract is locked in the sanctuary's supply room, and the keys to the supply room are stuck inside Muriel's trunk.

Angel turns to the other animals for help, but they refuse after how poorly he took care of them. Angel appeals to their love for Fluttershy and asks them to help for her sake, and they begrudgingly agree. Working together, the animals succeed in liberating Muriel from Antoine's stomach and the supply room keys from Muriel's trunk. With the concentrated carrot extract from the supply room, Angel and Dr. Fauna nurse Fluttershy back to health.

Angel sympathizes with Fluttershy for the hard work she does in managing the sanctuary and balancing it with her duties as a friendship teacher. Likewise, Fluttershy sympathizes with Angel for how hard it is for him getting from one place to another in such a tiny body. As the two gain a newfound understanding and appreciation for each other, the magic of Zecora's potion returns them to their original bodies.

During the next predator/prey support group meeting, Fluttershy promises to always make time for Angel from now on, and Angel offers to help out around the sanctuary every now and then so that Fluttershy does not get overwhelmed with work so often. Meanwhile, Dr. Fauna reveals that the gecko Zecora brought to the sanctuary is actually a fire lizard.

Angel: [angry chittering]
Fluttershy: I am listening to you. But if you really want to be heard, you should join our predator/prey support group. Then you can talk to everyone here. You could teach all these hungry predators the delights of a carrot-based cuisine. Sorry, everyone. I think somebunny just wants a little attention. Now, since we all need to get along, what if all predators promise to only eat vegetables while staying at the sanctuary?

Zecora: Even the best of friends need help from time to time. Come visit me in my hut, should you change your mind.

Antoine: [hisses]
Fluttershy: There's snake treats made to look like chocolate chip cookies.
Antoine: [chews, gulps]
Fluttershy: They're vegan. Pinkie Pie made a whole jar of them. They're all yours if you promise. No more trying to eat Muriel the baby elephant. [gasps] No, Angel. I have too much to do.

Fluttershy: Hmm. I suppose we could dust off the old picnic blanket. It'll be just like old times. We'll drink the potion and settle in for a nice tea party. I can barely remember the last time we did that. I've been so busy at the sanctuary. Though I really need to keep an eye on Zecora's gecko, and I haven't finished any of today's chores. If I don't, the animals won't get the care they need. Ohh. Maybe we should just save the potion until af— Angel! Zecora said to go home first!

Dr. Fauna: Hey, Fluttershy! I was starting to wonder if you'd make it back!
Angel: Fluttershy?! Oh...yeah. Uh, that's me! Definitely Fluttershy. A hundred percent.
Dr. Fauna: O...kay.
Angel: See how...shy I am? Hm? I talk to animals, I wanna marry Discord...

Angel: [grunting]
Dr. Fauna: Fluttershy? Do you mind helping me look for Muriel the baby elephant?
Angel: Oh, she's having dinner with Antoine.
Dr. Fauna: Antoine the python?!
Angel: It was on the list. "Remember – Antoine wants to have Muriel over for dinner."
Dr. Fauna: Not OVER for dinner! He wants to have her FOR dinner!
Angel: Wait. What?!

Angel: Eh, I'm sure that's normal. There you go. Problem solved. I don't see what's so hard about this job. Fluttershy is such a whiner. 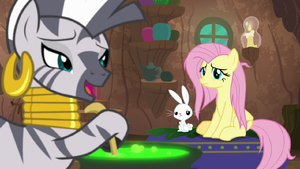 She Talks to Angel image gallery