Start a Wiki
Sheriff Silverstar is a male Earth pony who first appears in the season one episode Over a Barrel. He serves as the sheriff of Appleloosa.

Sheriff Silverstar's color scheme is mostly the same as those of "Concerto", Dr. Hooves, "Kazooie", Tight Ship, and Globe Trotter.

Sheriff Silverstar first appears in Over a Barrel. While showing Applejack and her friends around Appleloosa, Braeburn introduces him while he relaxes in front of his office. He later watches Pinkie Pie's performance of You Got to Share, You Got to Care. At the end of the song, Silverstar has his first lines of dialogue in which he and Chief Thunderhooves agree that it was the worst performance they had ever seen. Afterward, he and the buffalo declare war over the land on which Appleloosa is built.

Sheriff Silverstar assists the townsponies in preparing Appleloosa for the upcoming buffalo attack, ignoring Twilight Sparkle and her friends' attempts to reason with them. He also takes part in the conflict by throwing apple pies at the buffalo. When the conflict ends and the buffalo and Appleloosans come to an agreement, Silverstar is last seen nodding to Chief Thunderhooves and Little Strongheart.

Sheriff Silverstar appears at the beginning of Pinkie Pride with the rest of the Appleloosans and buffalo enjoying a party that Cheese Sandwich had thrown for them.

He also appears in Equestria Games in the stadium crowd.

Sheriff Silverstar appears again in Appleoosa's Most Wanted. He learns that notorious outlaw Trouble Shoes has come to Appleloosa, and he takes measures to make sure he doesn't ruin the Appleloosa rodeo. Later in the episode, when Silverstar is playing a card game with his deputies, Applejack and Braeburn enter to inform him of the Cutie Mark Crusaders' disappearance, believing Trouble Shoes to be responsible. Silverstar organizes a search party to find the missing Crusaders and apprehend Trouble Shoes.

In the woods outside Appleloosa, Sheriff Silverstar finds Trouble Shoes traveling with the Crusaders and places him under arrest. The next day, Silverstar watches over Trouble Shoes in his jail cell as the rodeo is held. After he falls asleep on the job, Sweetie Belle uses her magic to steal the cell door keys, and Apple Bloom lures Silverstar away from the office so the Crusaders can break Trouble Shoes out.

During Trouble Shoes' rodeo clown performance, he accidentally reveals his identity to the crowd, and Sheriff Silverstar prepares to arrest him again. After the Crusaders stand up for him and he accepts responsibility for his mistakes, Silverstar lets him off the hook.

Sheriff Silverstar is a character in Gameloft's mobile game. The game's description of him states, "With this awesome Earth pony on the case, Appleloosa's most wanted don't stand a chance!"

"An' we Appleloosans say you'd better bring yer best, 'cause we'll be ready and waitin'."
— Over a Barrel

"I reckon I oughta cancel this rodeo like all the others done. But dag-hoof it, this has gone far enough! We'll double the patrols! This rodeo will go on! Appleloosa ain't gonna be intimidated!"
— Appleoosa's Most Wanted

"Fish my wish!"
— Appleoosa's Most Wanted

"Trouble Shoes, you're under arrest for vandalizin' the property and peace of mind of the good rodeo-lovin' ponies of Equestria! Not to mention fillynappin'! And... generalized mayhem!"
— Appleoosa's Most Wanted

"I AM the law!"
— Enterplay collectible card game The Crystal Games #27 C card of Sheriff Silverstar 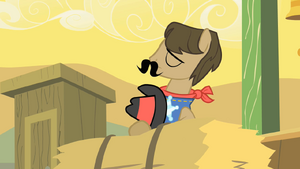 Retrieved from "https://mlp.fandom.com/wiki/Sheriff_Silverstar?oldid=2041709"
Community content is available under CC-BY-SA unless otherwise noted.