Shining Armor is a male unicorn pony and Twilight Sparkle's older brother. He is the captain of the Canterlot Royal Guard, serving under Princess Celestia and Princess Luna, and bears the title of prince as a result of his marriage to Princess Cadance. He first appears in the two-part season two finale alongside Cadance. In the season three premiere, he and Cadance are appointed as the rulers of the Crystal Empire.

Lauren Faust was involved with the inception of the story where Shining Armor first appears. Faust came up with several aspects of Shining Armor's character, such as his name, powers, and being Twilight Sparkle's brother.[2]

Shining Armor first appears in A Canterlot Wedding - Part 1. Princess Celestia invites Twilight Sparkle, his younger sister, to the wedding of Shining Armor and Princess Mi Amore Cadenza. Twilight is upset that Shining Armor did not write to her directly, and doesn't recognize who his bride is. In the song B.B.B.F.F. ("Big Brother Best Friend Forever"), Twilight remembers how she was very close to Shining Armor until she moved to Ponyville and lost touch with him. Twilight fears that they will become even more distant after he marries someone and starts a new family.

Shining Armor later tells Twilight he was unable to tell her of his engagement in person due to a threat on the safety of Canterlot; he adds that Princess Mi Amore Cadenza is Cadance, Twilight's former foal-sitter. At the request of Princess Celestia, Shining Armor used his magic to create a protective barrier around Canterlot and keep it there constantly. Twilight states that only Shining Armor can conjure up the shield.

Twilight tries to tell Shining Armor that something is wrong, but Queen Chrysalis, having taken the place of and impersonating Cadance, interrupts and takes Shining Armor into another room. Twilight, peeking through the door, sees the fake Cadance casting a spell on Shining Armor that makes his eyes glow green. The next day, Twilight confronts the impostor Cadance at the wedding rehearsal and accuses her of evildoing in front of Shining Armor and her friends. After Cadance runs off in tears, Shining Armor contradicts Twilight's accusations, saying that the spell Cadance cast on him was to ease his chronic headaches from maintaining the magical shield around Canterlot. Shining Armor is so upset with Twilight that he takes away her position of Best Mare and suggests that she should not come to the wedding at all.

Chrysalis traps Twilight in the catacombs under Canterlot and states that she has plans for Shining Armor.

Shining Armor, fully under Queen Chrysalis's magic, is in a trance-like state at the wedding. Twilight and the real Cadance burst into the hall, and Shining Armor is reunited with his true bride. Cadance's magic breaks the spell on Shining Armor, but by now the changeling army has broken through Canterlot's defensive shield and is invading the city. Shining Armor tries to perform a spell to repel the changelings, but he doesn't have the power. Cadance tells Shining Armor that her love will give him strength, and their combined magic spreads outward and blasts all the changelings and their queen out of Canterlot.

With peace restored to Canterlot, another wedding is planned with the real Cadance. Shining Armor makes Twilight his Best Mare again. He jokes that Cadance only agreed to marry him after he told her she'd be gaining Twilight as her sister. At the wedding, Princess Celestia declares that the power of Cadance and Shining Armor's love is undeniable, and pronounces them "mare and colt." The couple waves to the cheering crowds from a castle balcony and kiss.

After a wedding reception montage, Shining Armor thanks Twilight for her help, and leaves the reception with Cadance in a carriage.

Shining Armor next appears in The Crystal Empire - Part 1. When Princess Celestia receives word of the Crystal Empire's return, she instructs a guard to inform Shining Armor as well as his wife, Princess Cadance. Upon their arriving in the Arctic North of Equestria, he greets the Mane Six at the train station before they run to the Crystal Empire in an attempt to escape the shadow form of King Sombra. As the others enter the forcefield protecting the empire, Shining Armor stays back to buy more time, but his horn becomes encrusted with Sombra's black crystals, impairing his unicorn magic. He reunites with Cadance in the castle and stays by her side throughout the remainder of the episode, comforting her in her weakened state as she struggles to maintain the protective forcefield around the Crystal Empire.

Shining Armor appears in Magical Mystery Cure. He talks to Twilight during her princess coronation and has watering eyes, which he insists aren't tears but "liquid pride."

In Pinkie Pride, Shining Armor makes a portrait cameo on Pinkie Pie's wall during his wedding reception with Cadance. Shining also appears in Equestria Games. He announces the opening of the games, and acts as commentator for the events. During the games, as Spike volunteers to sing the Cloudsdale National Anthem, Shining reminds Spike that they only play the anthem for the winners. After one of the ice archers accidentally shoots an arrow into a cloud causing it to become solid and sink down towards the stadium, Shining orders security to cut the unicorn disabling spell that unicorns had to use before entering the stadium.

In Twilight's Kingdom - Part 2, Shining notices the sun moving around funny as Twilight attempts to raise it. Discord suddenly teleports next to Shining, who calls him a traitor for allying himself with Lord Tirek. He tries to attack Tirek but has his magic stolen instead. At the end of the episode, his magic is returned to him after Twilight and her friends use the Rainbow Power against Tirek.

In Slice of Life, Shining Armor appears at Cranky Doodle Donkey and Matilda's wedding, getting overemotional at their impending nuptials.

In The One Where Pinkie Pie Knows, Shining Armor and Cadance announce that they are having a baby, and they reveal this to Twilight through a scavenger hunt.

In the IDW comics story arc Neigh Anything, Shining Armor and Princess Cadance tell Twilight and her friends the story of how they met and fell in love. An alternate universe version of Shining Armor - who appears sicklier than his main universe counterpart - appears on cover A of Friendship is Magic Issue #19 and page 11 of Issue #20 alongside an alternate Cadance. Shining Armor is mentioned by Princess Celestia in Issue #20.

In The Fall of Sunset Shimmer, a younger Shining Armor appears playing with a younger Twilight and Princess Cadance in the background.

In Siege of the Crystal Empire, Shining Armor is forced to deal with the return of King Sombra and an alliance of villains that includes Chrysalis and her changelings, Iron Will, Lightning Dust, Flim and Flam, and Sombra's childhood friend Radiant Hope.

In My Little Pony: Friends Forever Issue #26, Shining Armor gets involved in a "sensitive diplomatic mission" with Prince Blueblood.

The human version of Shining appears in My Little Pony Equestria Girls: Friendship Games as an alumnus of Crystal Prep Academy who encourages his sister, Twilight's human counterpart, to participate in the Friendship Games as he once did. He also displays an attraction to Cadance, the school dean.

Shining Armor was put in multiple 2012 playsets, always paired with Cadance and often themed around their wedding:

Shining Armor is one of the available playable characters in Gameloft's mobile game. The game sometimes lists him as Prince Shining Armor.[6] An early preview of the game listed him as Shining Armour[7] instead of Shining Armor.[8]

Twilight Sparkle's big brother Shining Armor is Captain of the Canterlot Royal Guard. He is also married to Princess Cadance.

Shining Armor is listed as possessing a seventh Element of Harmony, Love, in the 2012 My Little Pony trading cards; the initial release additionally lists it as his pet. The element is also attributed to Princess Cadance.

In the Enterplay collectible card game's expansion set Canterlot Nights, Cherry Fizzy's card #29 C states that "Cherry Fizzy has been friends with Shining Armor since their first day of basic training",[9] and Twilight Velvet's card #66 C states that Shining Armor "was Captain of the Guard in Canterlot, and is now Prince of the Crystal Empire".

In a video uploaded by The Hub's YouTube channel during the week between the screening and airing of A Canterlot Wedding, Katherine Kallinis mentions "The Hub's My Little Pony Royal Wedding of Princess Cadance and Prince Shining Armor".[10]

SHINING ARMOR is the Unicorn captain of the Canterlot Royal Guard as well as the coleader of the Crystal Empire alongside his wife, Princess Cadance. He's also Twilight Sparkle's protective older brother, whom she affectionately calls her "BBBFF" (Big Brother Best Friend Forever).

Throughout his appearances, Shining Armor is portrayed as kind, caring, and protective. He has a very close relationship with his little sister Twilight Sparkle, and he is warm and loving toward his fiancée (and later wife) Princess Cadance. True to being the captain of the royal guard, he is also stern at times, as seen in Games Ponies Play and Twilight's Kingdom - Part 2. Despite his professionalism, Shining Armor has had moments of immaturity, like bawling his eyes out in Slice of Life and childishly coddling his previous childhood possessions in The One Where Pinkie Pie Knows.

In the IDW comics' Neigh Anything story arc, Shining Armor is shown to have been socially awkward, shy, and nerdy in his academy years.

"A threat has been made against Canterlot. We don't know who is responsible for it, but Princess Celestia asked that I help provide additional protection."
— A Canterlot Wedding - Part 1

"The burden of keeping Canterlot safe and secure rests squarely on my shoulders."
— A Canterlot Wedding - Part 1

"You're my little sister. Of course you're important to me. But I would understand if you didn't want to be my best mare now."
— A Canterlot Wedding - Part 1

"No! My power is useless now. I don't have the strength to repel them."
— A Canterlot Wedding - Part 2

"I told her she wouldn't just be gaining a husband; she'd be getting a pretty great sister too."
— A Canterlot Wedding - Part 2

"None of this would've been possible without you, little sis. Love ya, Twily."
— A Canterlot Wedding - Part 2

"You've gotta stop saving my rump like this. It's starting to get embarrassing."
— The Crystal Empire - Part 2

"Come on, gang! Are we gonna gallop, or are we gonna trot!?"
— Games Ponies Play

"Of course not, it's... it's liquid pride. Totally different thing."
— Magical Mystery Cure

"Twilight, you're scaring the staff! Crystal ghosts aren't even real. That's just a legend that goes back to the days of King Sombra, hundreds of moons ago."
— Friends Forever Issue #4 page 5 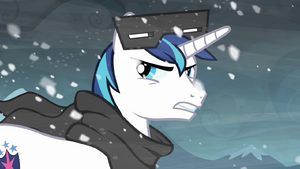 Retrieved from "https://mlp.fandom.com/wiki/Shining_Armor?oldid=1594627"
Community content is available under CC-BY-SA unless otherwise noted.