Shoeshine is a female Earth pony with a light blue coat, periwinkle mane, fandango eyes, and a cutie mark of two interlocking horseshoes, one gold and one silver. She does not have a name given in the show, but she is named in merchandise. She is identical to Lilac Links apart from her coat color, shares her design with Sweetie Drops, and has a similar color scheme to Screwy, S01E14 Unnamed Unicorn Mare #3, and "Bloo". Shoeshine makes her first spoken appearance in the season one episode The Ticket Master.

Shoeshine is commonly featured as a background pony. Her first appearance is in Friendship is Magic, part 1 as one of the first background ponies seen in Ponyville upon Twilight Sparkle's arrival, and she usually appears with Golden Harvest or Cherry Berry. She is associated with carrots twice: she offers Twilight some in The Ticket Master in order to obtain her extra ticket to the Grand Galloping Gala, and she munches on a carrot with the greens sticking out of her mouth in Winter Wrap Up.

She appears in Ponyville's marketplace in Griffon the Brush Off and Call of the Cutie. In the former, she stands in front of the stall that Gilda swipes an apple from, and in the latter, she wears two shopping bags over her back; one brown and one pink.

In the episode Winter Wrap Up, she is part of the plant team. Unlike the other plant team members, she frequently appears with yellow bands around the openings of her vest, and the leaf symbol on her vest is replaced with a yellow star. In the instance where she is seen eating a carrot, she even wears the same armband that Applejack wears that signifies that she leads the plant team. Also during this episode, a version of Shoeshine with a pink coat appears in a corner of the screen twice during the song.

She participates in the Running of the Leaves in Fall Weather Friends. She apparently has one of her number tags upside-down; one reads "18" while the one on her other side reads "81". After the race starts, her number changes to 6.

She reads a paper at a periodical stand in Green Isn't Your Color. When she glances off to the side, she spots Fluttershy and exclaims this, resulting in a chase and the eventual surrounding of Fluttershy by the paparazzi ponies.

She appears in both of the old-western towns in Over a Barrel and The Last Roundup, each time wearing a pink, white-banded cowboy hat. In the former episode, she draws horse-drawn carriages and helps in barricading Appleloosa later on; in the latter, she waits at Dodge Junction's train platform.

In Hearth's Warming Eve, there are crowds in which one of multiple Shoeshines wears a blue baseball cap; in A Friend in Deed, the same occurs with a unicorn sharing her coat and mane colors.

In Putting Your Hoof Down, she rudely cuts in line at Sugarcube Corner and is forced to the back of the line by an assertive Fluttershy; after this altercation, a mere glance from Fluttershy is enough to send all the other ponies in the line out of the shop, clearing the way entirely for herself.

In It's About Time, she is among the crowd of ponies who laugh at Twilight's story of being visited by her future self.

In The Crystal Empire - Part 1, Shoeshine appears during The Failure Song sitting at a café table in Canterlot. "Sir Pony Moore" brings her tea, which Twilight then pours.

Shoeshine watches the Summer Harvest Parade in One Bad Apple, and in one shot participates in the parade itself playing cymbals and has a different cutie mark.

In Sleepless in Ponyville, she is seen in the beginning talking to Cherry Berry.  When Scootaloo rides by they both get dizzy and get their manes tied together.

In Simple Ways, she is among the crowd of ponies outside Town Hall for the announcement of the Ponyville Day's Pony of Ceremonies, among the ponies at the train station, and is later seen talking to Sweetie Drops and Cherry Fizzy outside Town Hall. In Filli Vanilli, she is among the crowd cheering for the Pony Tones at the pet center's fundraiser, and the crowd watching the breezies in It Ain't Easy Being Breezies, watches the play in For Whom the Sweetie Belle Toils, among the ailed ponies Leap of Faith, and among the ponies welcoming Twilight Sparkle to the Exchange and later seen throughout said Exchange in Trade Ya!.

In Inspiration Manifestation she attends the Foal and Filly fair, is among the spectators in Equestria Games during the opening ceremony and when Spike sings the Cloudsdale Anthem wrong, and in Twilight's Kingdom - Part 1, she is sapped of her magic on two separate occasions in the Manehattan theater and in Appleloosa.

In season five, Shoeshine appears in The Cutie Map - Part 1 talking to Goldengrape in front of the Castle of Friendship, in Bloom & Gloom during Apple Bloom's first nightmare, in Tanks for the Memories taking part in the Running of the Leaves, in Appleoosa's Most Wanted as a rodeo spectator, in Slice of Life at Cranky Doodle Donkey and Matilda's wedding, in Princess Spike at the Grand Equestria Pony Summit, in Amending Fences at the Canterlot library, in Do Princesses Dream of Magic Sheep? floating in Ponyville's shared dream, and at the Sisterhooves Social in Brotherhooves Social. She also appears in the final group shot during Friends Are Always There For You in The Cutie Re-Mark - Part 2.

In On Your Marks, Shoeshine appears at the performance hushing Apple Bloom as she enters. In No Second Prances, she whispers with Caramel and Sunshower Raindrops about Trixie, and then appears at the show. In A Hearth's Warming Tale, she sings Hearth's Warming Eve Is Here Once Again as well as the reprise. In Applejack's "Day" Off, she appears in the Ponyville Day Spa. In The Cart Before the Ponies, she watches the Applewood Derby. She also appears in The Fault in Our Cutie Marks attending the baseball game and Gabby's cute-ceañera.

In season seven, Shoeshine is one of the many ponies at the medal ceremony in Celestial Advice, appears at Spearhead's art show in A Flurry of Emotions, in the stands of the Wonderbolts arena and watching the ribbon-cutting ceremony in Parental Glideance, as part of the angry mob outside Carousel Boutique in Fame and Misfortune, and in the crowd at Davenport's auction and in Mr. Breezy's shop admiring the giant fan in It Isn't the Mane Thing About You. In Secrets and Pies, she appears twice receiving a pie intended for Rainbow Dash, and she has a speaking role, the second time being offscreen.

In My Little Pony Best Gift Ever, Shoeshine appears in the Ponyille marketplace during One More Day talking to Candy Apples and later talking to Amethyst Star. She later appears operating a stand at the marketplace where Twilight buys Hearth's Warming ornaments.

Shoeshine makes a brief appearance at the very beginning of My Little Pony Equestria Girls, walking alongside Cherry Berry at the Crystal Empire train station.

In Rainbow Rocks, Shoeshine appears as one of many ponies seen in the establishing shot of Ponyville.

In Friendship Games, Shoeshine appears outside Ponyville looking shocked when Midnight Sparkle opens one of the dimensional rifts to Equestria.

In Spring Breakdown, Shoeshine is one of many ponies seen in the establishing shot of Ponyville.

In the Best Gift Ever short Triple Pony Dare Ya, Shoeshine appears in line at the Ponyville marketplace for Granny Smith's Hearth's Warming fruitcake.

A glitter mini-figure toy with Shoeshine's likeness was released in May 2012 as part of the fourth wave of mystery packs. The toy uses the Applejack mold but features Shoeshine's base color, eye color, and cutie mark. Her name comes from the collector card accompanying the toy. The European collector card describes Shoeshine as "so understanding". The U.S. collector card has a longer description and reads, "SHOESHINE is understanding and listens to her friends!"[2]

A fifth mini-figure toy of Shoeshine has been leaked.

Shoeshine also appears on the RI cover for My Little Pony: The Movie Prequel issue 3.

"I have a cartload of extra carrots."
— The Ticket Master

"It's Fluttershy!"
— Green Isn't Your Color

"Oh! It's not even my birthday!"
— Secrets and Pies 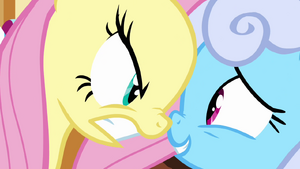