Shooting Star is a male background pony with a white coat, light blue mane, tail, and eyes, and a cutie mark of a dark blue Orion constellation. He is an Earth pony both in some in-show appearances and in merchandise, while he is a unicorn both in some in-show appearances and in other media. He is unnamed in the show, but he is named in merchandise and other media.

Shooting Star most commonly appears among other high-society Canterlot ponies. He first appears in The Best Night Ever as a guest at the Grand Galloping Gala. He is one of several chorus singers in At the Gala; during the scene in which he shakes Twilight Sparkle's hoof forcefully and struts off to the ballroom, he appears larger than usual; during the critter stampede, he appears with a mostly-alternate design.

Shooting Star appears during The Failure Song in The Crystal Empire - Part 1, watches the Summer Harvest Parade in One Bad Apple (as a unicorn), and appears at Twilight Sparkle's princess coronation in Magical Mystery Cure.

In Princess Twilight Sparkle - Part 1, Shooting Star appears in the crowd panicking to Twilight when Princess Celestia and Princess Luna disappear. He appears in Maretropolis in Power Ponies, at Fashion Week in Rarity Takes Manehattan, at the Ponyville Days festival at the end of Simple Ways, at the Rainbow Falls Traders Exchange in Trade Ya! (as a unicorn), and in the stadium crowd in Equestria Games. He is seen at the Crystal Empire in Twilight's Kingdom - Part 1, and his unicorn version has his magic stolen by Lord Tirek at the end of the episode.

In Make New Friends but Keep Discord, Shooting Star appears once again as a guest of the Grand Galloping Gala. In Princess Spike, he enjoys tea at a Canterlot cafe and watches a polo game outside the castle. In Amending Fences, he walks in front of the Canterlot library. In Canterlot Boutique, he appears at the Canterlot train station and the Canterlot Carousel grand opening. In Rarity Investigates, he talks to an unnamed Wonderbolt at the dinner before Princess Celestia's royal garden opening in Canterlot Castle. In The Mane Attraction, he attends Coloratura's performance of The Magic Inside at the Helping Hooves Music festival. In The Cutie Re-Mark, he attends Twilight Sparkle's lecture on cutie marks at the School for Gifted Unicorns.

In A Hearth's Warming Tail, Shooting Star appears in the Castle of Friendship during Hearth's Warming Eve celebrations during the Hearth's Warming Eve Is Here Once Again reprise. In Spice Up Your Life, he makes a cameo appearance walking through Canterlot. In Buckball Season, he appears as one of the unicorns unsuccessfully trying out for Rainbow Dash and Applejack's buckball team.

In Celestial Advice, Shooting Star makes a cameo appearance attending Starlight Glimmer and her friends' Equestrian Pink Hearts of Courage medal ceremony. In Forever Filly, he makes a background appearance talking to Dr. Hooves in Ponyville. In Parental Glideance, he spectates the Wonderbolts showcase in Canterlot. In Triple Threat, he appears in the crowd for Ember and Thorax's Dragon Fire Flame of Friendship ceremony in front of Ponyville Town Hall.

In Surf and/or Turf, Shooting Star makes a cameo appearance exiting the Friendship Express as it arrives at Mount Aris. In Yakity-Sax, he attends the Wonderbolts' derby in Canterlot and when Pinkie Pie suddenly appears and poorly plays her yovidaphone. In The Washouts, he appears in the audience for each of the titular groups' two Ponyville shows.

In The Beginning of the End - Part 1, Shooting Star briefly appears walking through Canterlot. In The Point of No Return, he makes cameo appearance walking through Canterlot and later walking by the Canterlot Library with Twinkleshine. In Common Ground he appears as a buckball fan in the opening newsflash and later entering the Appleloosa buckball stadium and attending various games. In She's All Yak, he appears in the sequences of high-class ponies during Fit Right In. In The Last Laugh, he appears in a flashback in the line of Cheese Sandwich's customers during Kettle Corn's birthday party. In 2, 4, 6, Greaaat, he spectates the buckball game between the School of Friendship and the School of Magic and also watches the halftime cheerleading routine.

Shooting Star is a playable character in Gameloft's mobile game, and was released on the Version 2.3 Dragon-fighting update on April 21, 2015. In the game he appears as a unicorn, and his description reads "This high-society unicorn always shoots for the stars!"

In the Canterlot Nights expansion set of Enterplay's collectible card game, Shooting Star is named on his card #22 C, which features him as an Earth pony and lists the quote "Oh, you already heard that one? What about the time I went around the world in 78 days? No, not 80 days, that was the other guy!", and is shown on Critter Stampede card #102 R, which depicts him with his mostly-alternate design.

"Oh, you already heard that one? What about the time I went around the world in 78 days? No, not 80 days, that was the other guy!"
— Enterplay collectible card game Canterlot Nights #22 C card of Shooting Star 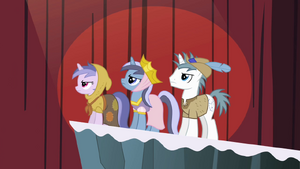