Sia Furler, known professionally as Sia, is an Australian singer-songwriter, record producer, and music video director. She provides the voice of Songbird Serenade in My Little Pony The Movie as well as the song Rainbow for the film's soundtrack.

Sia's involvement in the film was first announced at the My Little Pony panel at San Diego Comic-Con 2016, which was then reported by The Hollywood Reporter[1] and Deadline[2] in July 2016. Her revealed character's design is directly modeled after her facially obscured stage persona.[3]

Outside My Little Pony, Sia is best known as a singer-songwriter and music composer. She started her career as a singer in the Adelaide acid jazz band Crisp in the mid-1990s and released her debut studio album OnlySee in Australia. She would later sign with a number of music labels, release several additional studio albums, collaborate with multiple recording artists including David Guetta, Beyoncé, Kylie Minogue, Flo Rida, and Rihanna, and receive a wide array of awards and accolades.

Among Sia's most well-known songs that she has performed and co-written include "Chandelier", "Elastic Heart" (written for the 2013 film The Hunger Games: Catching Fire), "Cheap Thrills", "The Greatest" and "Titanium". She also contributed to the soundtrack for the 2014 film adaptation of Annie, co-wrote "Try Everything" for the 2016 Disney film Zootopia, covered Nat King Cole's "Unforgettable" for the 2016 Pixar film Finding Dory, and, with Labrinth, performed the end credits song "To Be Human" for the 2017 film Wonder Woman. 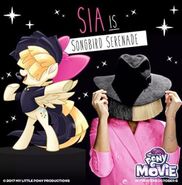