Silver Berry first appears in the season four episode Power Ponies during a sweeping shot of Maretropolis. She later makes multiple appearances in Manehattan in Rarity Takes Manehattan, at one point receiving help from the Mane Six when her taxi carriage breaks down with a broken wheel. In Pinkie Pride, a filly Silver Berry appears in Cheese Sandwich's flashback during Cheese Confesses.

Silver Berry later appears in Trade Ya! when Pinkie Pie auctions off Princess Twilight Sparkle's books. She also appears several times in Equestria Games, at one point having a different cutie mark.

In season five, Silver Berry briefly appears after the residents of Our Town reclaim their cutie marks from Starlight Glimmer's cutie mark vault. In Princess Spike, she appears in attendance of the Grand Equestria Pony Summit in Canterlot. She also appears multiple times in Made in Manehattan.

In season six, Silver Berry appears multiple times in The Gift of the Maud Pie and attends the grand opening of Rarity For You in The Saddle Row Review.

In season eight, Silver Berry has a speaking role in Fake It 'Til You Make It opposite Fluttershy's snooty salespony persona.

Silver Berry is a character in Gameloft's mobile game, and acts as an enemy minion during the "Fake It 'Til You Make It" boss battle event. Her bio states, "She knows the difference between a chevron and chèvre, and isn't afraid to say it."

Silver Berry in included in the twentieth wave of mystery pack toys and collector cards, which lists her name with a trademark symbol and states that she and Swanky Hank "love wearing designer clothes." 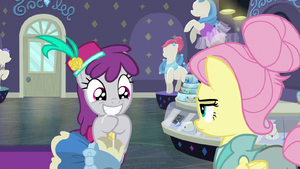