Silver Script is the placeholder name of a male background Pegasus pony with a purple coat, gray mane and tail, bluish gray eyes, and a cutie mark of a scroll.

Silver Script first appears in Hearth's Warming Eve as one of the Pegasus actors in the pageant. He then appears on a date with Parasol in Hearts and Hooves Day. In Hurricane Fluttershy, he is one of the Pegasi helps to lift water from Ponyville to Cloudsdale.

In season four, Silver Script appears on the Equestria Games tryouts field in Rainbow Falls, watches the goof-off betweeen Pinkie Pie and Cheese Sandwich, attends a performance by the Pony Tones in Filli Vanilli, appears at the Rainbow Falls Traders Exchange in Trade Ya!, and appears during Let the Rainbow Remind You in Twilight's Kingdom - Part 2.

In season five, Silver Script carries clouds from Cloudsdale to Ponyville in Tanks for the Memories, attends the Grand Galloping Gala in Make New Friends but Keep Discord, watches the Wonderbolts' aerial performance in Rarity Investigates!, and listens to Coloratura's song in The Mane Attraction.

In season six, he appears in Newbie Dash, A Hearth's Warming Tail, and The Cart Before the Ponies.​[​specify​]​

In season seven, he appears in Parental Glideance, Triple Threat, and It Isn't the Mane Thing About You.​[​specify​]​

In season eight, he appears in Grannies Gone Wild and Surf and or Turf.​[​specify​]​

In season nine, he appears in She's All Yak, The Summer Sun Setback, A Horse Shoe-In, and The Last Problem.​[​specify​]​

Silver Script appears in episodes 3, All About Alicorns, and 7, Hearth's Warming Eve.

Silver Script appears in episode 5 of Fundamentals of Magic, "When Magic Goes Wrong". 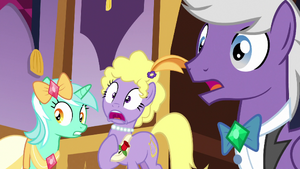