Silver Shill's voice actor is Ian James Corlett, the father of Claire Corlett, the voice actress of both Sweetie Belle and Little Pony 1. His voice was also modeled after Oscar winning actor Jimmy Stewart.​[​citation needed​]​ His design is unique in that, like some taller ponies such as Mr. Cake, he has a slight underbite.

The word "shill" is used to describe a person who poses as a customer in order to decoy others into participating, as at a gambling house, auction, confidence game, etc. It may also be a nod to the shilling, a former unit of British currency.

Silver first appears as a member of Flim and Flam's audience in Leap of Faith, wearing oversized glasses and a pair of overalls and using a pair of crutches to walk. He is called on by the brothers to demonstrate their "Miracle Curative Tonic" and appears able to walk on his own after drinking it. He then takes part in the brothers' song and dance before dancing out of the brothers' tent.

He appears again at the tent later that night, dancing outside the same way he did earlier. He is recognized by Applejack and Apple Bloom, who chase him to a costume area behind the tent. Applejack deduces from the props and wigs around them that Silver is an accomplice of the Flim Flam Brothers, who pretends to be cured by their fake tonic to trick other ponies into buying it. He flees before she can get him to confess, and is soon found cowering behind the brothers, confirming her suspicions.

The next day, Silver is seen wearing a wig and fake mustache, purchasing one of the brothers' tonics.

Silver makes another appearance at the Ponyville Swim Meet, this time as a vendor selling one of Flim and Flam's tonics to Neon Lights, glad to have made his first bit as a salespony. He tells Applejack that he was initially reluctant to help the brothers deceive ponies, but now believes that "honesty isn't always the best policy" since Applejack, whose attempts to confront the brothers had been twisted against her, is now endorsing their product.

After Applejack saves Granny Smith from performing a dangerous stunt under the tonic's influence and publicly admits to lying about the tonic, Silver also confesses his part in the act, including the making of the fake tonic. He then gives his dishonestly earned bit to Applejack as thanks for helping him realize his mistake, and promises to track down the pony he sold the tonic to and give him a refund with another bit.

Silver appears in his fake glasses and vendor uniform in Equestria Games, with popcorn.

He later makes an appearance in season 4 during the song Let the Rainbow Remind You along with the others whose lives were changed: Coco Pommel, Spitfire (and The Wonderbolts), Cheese Sandwich, Seabreeze (and the Breezies) and Discord.

"Determined to succeed as a salespony, Silver Shill will do anything to make it... even being dishonest! But he soon learns that the sweetest success comes from having earned it honestly."

SILVER SHILL was been[sic] a tricky pony in the past, helping con ponies Flim and Flam sell their bogus healing tonics to unsuspecting ponies by pretending to be an eager customer. Silver Shill has turned over a new leaf, and now thinks honesty is usually the best policy.

"I won't need these crutches to dance out the door."
— During Flim Flam Miracle Curative Tonic in Leap of Faith

"I used to wonder if I was doing the right thing. You know, pretending to be cured, basically lying to folks about this tonic. But thanks to you, I realized that sometimes honesty isn't the best policy."
— Leap of Faith

"Watching Applejack save Granny and then admit to lying, well, that made me realize I was making ponies believe in a thing that just wasn't so!"
— Leap of Faith

"Thank you, Applejack. I got this through dishonest means. That was a mistake I won't be making again! I'd like you to have it, as a reminder of how you helped me finally see the truth."
— Leap of Faith 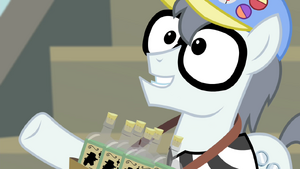