Silver Spanner is a female background unicorn pony who appears in multiple episodes throughout the series. She has a dark orange coat, white mane and tail, bluish-gray eyes, and a cutie mark of a spanner (or wrench). She is not named in the show, but she is named in merchandise.

Silver Spanner's design varies depending on the angle she is shown from, similarly to "Mjölna".

Silver Spanner usually appears in crowd shots in the series, almost always from the back except for one shot in The Super Speedy Cider Squeezy 6000, one shot in Pinkie Pride, and one shot in Equestria Games.

Silver Spanner first appears at the Summer Sun Celebration in Friendship is Magic, part 1, listening to Mayor Mare welcome Princess Celestia. In the following episode, she bows to Princess Luna at her welcoming party in Ponyville. She appears at Applejack's appreciation party in Applebuck Season, Trixie's magic show in Boast Busters, in the town square just before Winter Wrap Up begins in Winter Wrap Up, and at Rarity's public fashion show in Suited For Success.

Silver Spanner also watches the school talent show in The Show Stoppers, and she appears at the Summer Sun Celebration in Twilight Sparkle's flashback in The Cutie Mark Chronicles.

In The Super Speedy Cider Squeezy 6000, Silver Spanner is seen from the front for the first time during The Flim Flam Brothers, and she appears in several additional shots throughout the episode. In A Friend in Deed, she briefly appears during Smile Song.

Silver Spanner appears at the Crystal Faire alongside Sapphire Joy in The Crystal Empire - Part 1, and she appears in the town square in Magic Duel.

Silver Spanner attends the Summer Sun Celebration at the end of Princess Twilight Sparkle - Part 2. She is seen from the front during Cheese Confesses in Pinkie Pride. She appears at the Ponyville Days festival in Simple Ways, watching Flim and Flam's tonic demonstration during Flim Flam Miracle Curative Tonic in Leap of Faith, and in several crowd shots attending the Rainbow Falls Traders Exchange in Trade Ya!. In Equestria Games, she appears in the audience watching Spike light the torch for the titular event.

In Honest Apple, Silver Spannier appears in the audience for the Couture du Future Fashion Contest

Silver Spanner is a character in Gameloft's mobile game.

In Enterplay's collectible card game, Silver Spanner is named on her card, α #32 R, which attributes to Bon Bon the quote "I never knew the words 'I think my radio is broken' could make somepony so happy." In the game's Crystal Games expansion set, card #57 C of Silver Spanner lists the quote "One mare's trash is another mare's treasure!" 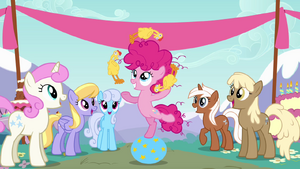