Silver Spoon is a female school-age Earth pony and minor antagonist who first appears in Call of the Cutie, alongside her best friend Diamond Tiara. She and Diamond Tiara are classmates of the Cutie Mark Crusaders. Silver Spoon's name and cutie mark are derived from the phrase "born with a silver spoon in your mouth," which implies being born into wealth and privilege.

In Call of the Cutie, Silver Spoon and Diamond Tiara invite Apple Bloom and Twist to Diamond Tiara's cute-ceañera, a party to those who just earned their marks recently, just so that they and the party attendees will make fun of both of them.

When Apple Bloom tries to hide her lack of cutie mark from the ponies in the party with a table cloth, she bumps into the guest of honor and her friend, Diamond Tiara and Silver Spoon. As Apple Bloom prepares to leave, her makeshift dress shifts, exposing her flank. Diamond Tiara and Silver Spoon witness that it's blank and don't hesitate to make fun of Apple Bloom, who is soon joined by two other blank flanks. The teasing gets ignored as the blank flank ponies explain that being a blank flank means still having many possibilities open for them to explore. Silver Spoon later watches the other ponies play the party activities from the stairway, alongside Diamond Tiara.

She appears again along with Diamond Tiara on stage at the talent show in The Show Stoppers.

She appears in The Return of Harmony Part 1. In The Cutie Pox, she tries to prove that Apple Bloom's cutie mark is fake.

She and Diamond Tiara appear in Family Appreciation Day. They tease Apple Bloom about Granny Smith's eccentricities. However, after Granny Smith's story about the founding of Ponyville, Silver Spoon is the first pony in the class to applaud. In Hearts and Hooves Day, she is seen smiling when "Princess Erroria" gives the card to Diamond Tiara and then reacts to the game that Cheerilee mentions. In Ponyville Confidential, she makes a small background appearance, looking at Featherweight's cutie mark.

In One Bad Apple, she and Diamond Tiara become friends with Babs Seed, Apple Bloom's cousin from Manehattan who also bullies the Cutie Mark Crusaders, but Babs ends up standing up to them and stops being a bully.

She and Diamond Tiara appear in the Flight to the Finish. They attempt to undermine the Cutie Mark Crusaders' bid to be chosen as official flag bearers for the Equestria Games by mocking Scootaloo's inability to fly. In the end, their scheme fails, and the Crusaders are chosen to be flag bearers.

Silver Spoon appears again briefly in Pinkie Pride, during Pinkie the Party Planner. Diamond Tiara takes her milkshake, but Silver Spoon takes it back while she is singing.

She and Diamond Tiara appear very briefly in a crowd shot in Simple Ways. She also appears in Filli Vanilli.

When the Crusaders are unable to perform the tasks they'd been learning during Twilight Time, Silver Spoon teases them, remarking that they didn't come to learn from Twilight. At this, Twilight points out that none of the other foals came to learn either, and Silver leaves the library in disappointment among her classmates.

Silver Spoon makes a cameo appearance alongside Diamond Tiara and other ponies in the end of Twilight's Kingdom - Part 2 to see the newly formed Friendship Rainbow Kingdom castle.

Silver Spoon appears alongside Diamond Tiara in Bloom & Gloom during Apple Bloom's first dream. The pair of bullies this time teases Apple Bloom for having the "lamest cutie mark ever." Later in the episode, Silver Spoon along with other townsfolk start running from a Twittermite infestation that's destroying Ponyville.

In Crusaders of the Lost Mark, Silver unintentionally hurts Diamond's chances of getting the vote for class president. First, she accidentally reveals Diamond's plan to erect a statue of herself after being elected, then later encourages her to show the voters she actually cares about them; in both cases Diamond angrily lashes out at her, souring the voters' opinions. After Diamond loses, she discovers that Silver Spoon didn't even vote for her. When Diamond confronts her, Silver Spoon points out that she yelled at her just for trying to help. After Diamond runs off in anger, Silver Spoon says that she doesn't "have to follow her drama any more." By the end of the episode, the two appear to have reconciled.

Silver Spoon, along with the rest of the school ponies, meets Coloratura in The Mane Attraction. She also appears in The Cutie Re-Mark - Part 2 during Friends Are Always There For You.

In Parental Glideance, Silver Spoon and her classmates applaud Scootaloo on her school report. In Fame and Misfortune, she briefly appears in line outside the school for a copy of Twilight's friendship journal.

In Marks for Effort, Silver Spoon polishes her table while she and her classmates are cleaning up Cheerilee's classroom.

In She's All Yak, Silver Spoon appears in the reused image of The Cutie Re-Mark - Part 2 during Fit Right In.

In The Last Crusade, Silver Spoon appears in Cheerilee's class and at the CMC appreciation party. Her cutie mark appears on Auntie Lofty's quilt. In A Trivial Pursuit, Diamond Tiara appears walking alongside Silver Spoon in the background just as Twilight and Spike arrive at the Trivia Trot location.

In The Ending of the End - Part 2, Silver Spoon appears with other Earth ponies as Ponyville closes itself off from the other pony races. In The Last Problem, Silver Spoon briefly appears as a fully grown mare in future Ponyville and also as a filly in Rarity's group shot during The Magic of Friendship Grows.

In My Little Pony: Spirit of the Forest Issue #1, Silver Spoon is one of several foals the CMC call upon to help clean up White Tail Woods. She initially complains about having to clean up a mess she didn't make, but Diamond Tiara makes a motivational speech to convince her and the others to keep going.

Silver Spoon appears in the Ponyville Mysteries books Schoolhouse of Secrets and The Tail of the Timberwolf, accusing Lilymoon of enchanting the schoolhouse classroom in the former and hailing her as a hero in the latter.

Silver Spoon is one of the available playable characters in Gameloft's mobile game. An in-game advertisement for her used fanart[3] depicting her as a grown mare,[4] though her in-game character model matches her usual appearance.[5] Future Silver Spoon is unlocked when the player unlocks Future Sweetie Belle, Future Scootaloo, Future Big Mac, Future Sugar Belle, Future Diamond Tiara and Future Apple Foal in the Cutie Mark Deuxsaders event. Summertime Silver Spoon is a prize in the "Bump, Set, Spike!" event, the story of which sees her and Diamond Tiara playing volleyball against the Cutie Mark Crusaders.

Silver Spoon:
A wealthy and privileged filly, Silver Spoon is the best pony pal of Diamond Tiara.
Future Silver Spoon:
It isn't ours to speculate on Silver Spoon's future, but we'd bet she develops a true sense of herself -- while still valuing her best, lifelong friendship.
Summertime Silver Spoon
Summer for Silver Spoon probably means tennis lessons at the Club. Her backhoof's really been improving lately!

SILVER SPOON leads a privileged life. She's been given everything she could possible[sic] want. Sometimes she wonders if it'll ever be enough. In the meantime, she'll just keep on buying things she doesn't need.

"It's not like being the only pony there without a cutie mark would be, like, the most embarrassing thing ever."
— Call of the Cutie

"I love being special."
— Call of the Cutie

"Whatever. We still think you're losers. Right, Diamond Tiara?"
— Call of the Cutie

"Spinning a hoop around your waist? Puh-lease."
— The Cutie Pox

"I tried to help by mentioning your 'surprise' statue, and suddenly, I wasn't even allowed to speak! You could have actually won this election if you just listened to me. You wanna know how? [whispering] Sorry. I'm not allowed to speak."
— Crusaders of the Lost Mark

"What? I don't have to follow her drama any more."
— Crusaders of the Lost Mark 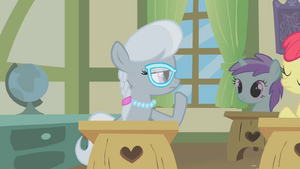