Silverspeed is a female Pegasus pony who first appears in the season two episode Hurricane Fluttershy. She has a gray coat, light gray mane and tail, purple eyes, and a cutie mark of a light blue bow and arrow.

Silverspeed first appears in Hurricane Fluttershy as one of the Pegasi training for the tornado. Rainbow Dash addresses her by name and compliments her on her pace. She appears again in Rainbow Falls at the Equestria Games qualification tryouts. In Tanks for the Memories, Silverspeed helps move clouds from Cloudsdale to Ponyville.

In the Crystal Games expansion set of Enterplay's collectible card game, card #28 R of Silverspeed gives her the description "Some coordination from a pony with a bird's-eye view can make a world of difference!" 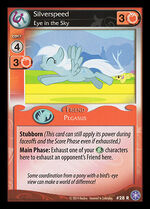