Simple Ways is the thirteenth episode of the fourth season of My Little Pony Friendship is Magic and the seventy-eighth episode overall. In this episode, Rarity tries to dress and act like Applejack in order to win the heart of a famous travel writer.

During Meghan McCarthy's Twitter Takeover event, she stated that the episode "might feature [her] favorite Rarity performance ever."[2]

The scene when Apple Jewel reveals herself reappears in Harvesting Memories.

The pony of ceremonies

At Carousel Boutique, Rarity presents to her friends her plans for the festival, which include a cider auction and tasting, a gala in the town square, and a fashion show. While her friends are more than impressed by her efforts and volunteer to help organize the event, Rarity is most concerned with impressing travel writer Trenderhoof. Twilight teases Rarity for her apparent crush, and Rarity makes no effort in hiding it.

At the train station, Rarity and Twilight await Trenderhoof's arrival, with Rarity beside herself with nervousness. When Trenderhoof finally appears, Rarity is unable to bring herself to even say hello and hides under Twilight's tail. Twilight is forced to drag her friend over to introduce herself. Trenderhoof says hello, and Rarity proceeds to faint.

A rival for Rarity

Rarity shows Trenderhoof around Ponyville, specifically spots that will serve as venues for the Ponyville Days festival events, and Trenderhoof is moderately impressed. However, he seems particularly taken with Sweet Apple Acres, especially Applejack the moment he sees her. The travel writer becomes instantly smitten with the farm-pony and calls her the pony of his dreams, devastating Rarity.

Back at Carousel Boutique, Spike finds Rarity in hysterics, lamenting that Trenderhoof is attracted to another mare despite having been obsessed with him for years herself. She begins to wonder what Applejack has that she doesn't. Meanwhile, Trenderhoof follows Applejack around Ponyville; Applejack does her best to keep him entertained, but she starts to get uncomfortable by his obsession with her. When Rarity appears in a sparkly mock cowpony outfit and claims to share Applejack's passion for apples, she still fails to draw Trenderhoof's attention.

Rarity tries several attempts to steal Trenderhoof away from Applejack, including plowing fields and apple-bucking. However, her attempts all fail and only attract Trenderhoof to Applejack more.

Frustrated by all the attention, Applejack isolates herself from Trenderhoof and actively avoids him. She hides in the barn and finds Rarity. Despite Applejack's efforts to explain that she doesn't know why Trenderhoof is fixated on her, Rarity will hear none of it. Convinced that Applejack is out to steal Trenderhoof from her, Rarity starts acting more like Applejack, including taking on a country accent.

Twilight and the others gather at Carousel Boutique again as Rarity unveils her new "Simple Ways" theme for the Ponyville Days festival: a theme reminiscent of farm and country life, with Rarity herself wearing a straw hat and overalls. Her friends are skeptical of this development, with Applejack insinuating that she's only doing it to impress Trenderhoof. Rarity dismisses the implication and leaves to organize the festival according to her new theme, frustrating Applejack even more.

At Sweet Apple Acres, Rarity scouts models for the fashion show as "Apple Jewel"—Applejack in a lavish dress—appears before her, attempting to beat her at her own game. As Applejack models and exhibits a passion for high class and culture, Rarity responds with a love for the simple life, hard work, and mud. When she splashes mud on Applejack's dress, Rarity drops the act. She apologizes to Applejack for her behavior and insults and thanks her for helping her realize how silly she'd been.

At that moment, Trenderhoof appears in a straw hat and overalls. He states that he's giving up being a travel writer and is moving to Ponyville to work on a farm. Rarity convinces him that no one should change themselves so much just to impress somepony else.

With Rarity's guidance, the Ponyville Days festival is finally thrown, using her original "small town chic" theme. As Rarity narrates about the lesson she learned, the festival is a complete success. Trenderhoof dances with Granny Smith during the town square gala, and he gives Rarity a rose during the fashion show.

Pinkie Pie: I'm glad the committee didn't automatically pick me so everypony gets a chance to see how great being me actually is! Even though the festival's basically a party and the pony of ceremonies gets to organize the whole thing. So it'd totally make sense if they did pick me.
Ponies: Shhh!

Pinkie Pie: I'm so excited for the festival I can hardly stand up straight!

Rarity: Oh, Spike, how could you ever know what it's like to be totally obsessed with a pony only to find out they're obsessed with somepony else?

Trenderhoof: Without farm life, there'd be such desparity.
These thoughts I think with great clarity.
Apples high to the sky;
She's the one of my eye.
That fruit hauling pony named... Applejack.

Spike: Don't we need to check on the gala decorations?
Rarity: Yes, yes, of course, but Trend obviously has a thing for farm life. If I can't convince him that I'm just as much of a farm hoof as Applejack, I'll never get him interested in the festival.
Spike: The festival. Right.
Rarity: And I do appreciate your help ever so much. I couldn't do a thing without you, Spikey-poo.
Spike: Well, that's what friends are for!

Applejack: Rarity, that is the silliest getup I have ever seen!
Fluttershy: It is a little funny.

Rarity: It's magnificent! Wherever did you get it?
Applejack: Oh, it's, uh, one of yours.
Rarity: I'll need three gallons of boiling water and one ounce of detergent, stat! 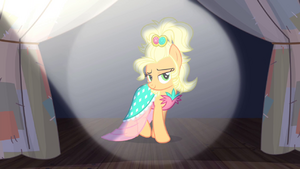