Sir Pony Moore is the placeholder name of a male background Earth pony with a bluish gray coat, dark gray mane and tail, blue eyes, and a cutie mark of three white stars.

In the book The Art of Equestria, a design is shown of him smoking a cigarette.

Sir Pony Moore first appears in The Best Night Ever as a guest at the Grand Galloping Gala. He is one of several chorus singers in At the Gala.

In Sweet and Elite, Sir Pony Moore appears several times during Becoming Popular (The Pony Everypony Should Know) and at the Canterlot Garden Party, sometimes as a darker-tailed unicorn. He appears as a judge for the dessert competition at the end of MMMystery on the Friendship Express (with a different cutie mark), he walks through Canterlot alongside "Charm" in A Canterlot Wedding - Part 1, and he attends both wedding ceremonies as well as the reception in A Canterlot Wedding - Part 2.

Sir Pony Moore serves tea to Shoeshine during The Failure Song in The Crystal Empire - Part 1, and he appears at Twilight Sparkle's princess coronation in Magical Mystery Cure.

Sir Pony Moore appears at Fashion Week in Rarity Takes Manehattan, in Appleloosa at the beginning of Pinkie Pride, in Sweetie Belle's dream and on the train to Canterlot (as a unicorn with the same mane style as his Earth pony version) in For Whom the Sweetie Belle Toils, outside the stadium in Equestria Games, at the Crystal Empire in Twilight's Kingdom - Part 1, and again in Appleloosa at the end of Twilight's Kingdom - Part 2.

In Make New Friends but Keep Discord, Sir Pony Moore appears at the Grand Galloping Gala. In Princess Spike, he watches a polo game outside Canterlot Castle. In Rarity Investigates!, he talks to Masquerade at Canterlot Castle during the dinner before Princess Celestia's royal garden opening. In Made in Manehattan, he appears walking through a park in Manehattan and subsequently walks down a sidewalk with Silver Berry later that night. In Crusaders of the Lost Mark, he appears in a crowd of high-society ponies mingling by the Ponyville fountain. In The Cutie Re-Mark - Part 1, he makes a background appearance standing with Sealed Scroll in front of the School for Gifted Unicorns.

In The Gift of the Maud Pie, Sir Pony Moore appears in Manehattan, hearing the sound of Pinkie Pie's party cannon, walking by the pouch store, and walking down a sidewalk later in the evening. In The Saddle Row Review, he makes a cameo appearance walking past the future site of Rarity For You in Manehattan with Luckette. In Spice Up Your Life, he makes a background appearance standing at a street in Canterlot's Restaurant Row with Perfect Pace during It's Gonna Work.

In the IDW comics, Sir Pony Moore appears on Friendship is Magic Issue #5 page 8, in nightmares that Pinkie Pie has on Issue #6 page 14, and on Micro-Series Issue #4 page 8. 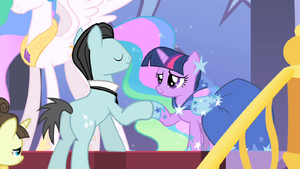