Sisterhooves Social is the fifth episode of the second season of My Little Pony Friendship is Magic and the thirty-first episode overall. "Sisterhooves" is a portmanteau of "sisterhood" and "hooves".

In this episode, Rarity and Sweetie Belle encounter a crisis in their relationship.

The episode starts off with Rarity waking up in terror after smelling smoke coming from the kitchen. After crashing downstairs, Rarity finds the cause of the smoke: Sweetie Belle trying to make breakfast in bed for her sister and already having burned her parents' breakfast. The parents tell Rarity that they are going on their scheduled week-long vacation and they're dropping off Sweetie Belle with her for the week, to which Rarity reluctantly accepts. Once they depart, Rarity cleans up the breakfast without even eating it, and decides to make a "proper" breakfast. Sweetie Belle wants to help, but Rarity ignores her sister's pleas until the latter urges her kindly. Sweetie Belle is finally told to add the garnish to the plates, but Sweetie Belle accidentally flips off the table under pressure from Rarity to put it on perfectly. Ironically, the parsley sprig does manage to land perfectly on a single plate.

Rarity huffily returns to work on her fashion line, while assigning Sweetie Belle to put away the dirty towels, to which she obliges cheerfully. Sweetie Belle decides to surprise her sister by washing the clothes, including a colorful sweater hung above the rest of the clothes. Much to Rarity's dismay the rare, one-of-a-kind wool sweater shrinks in the sun, infuriating Rarity. Although angry, Rarity bottles up her emotions and continues her work, meanwhile Sweetie Belle remains upset of her mistake. Later on, Sweetie Belle gets bored, but finds some paper and crayons and decides to draw a picture, under the premise that drawing had never gotten her into trouble before. She notes that something's missing, and uses all of Rarity's extremely rare baby blue sapphires, thinking she had more in her workroom. When a furious Rarity discovers this, she flips out again and leaves to fetch more sapphires, while Sweetie Belle cleans up the mess she made. When Rarity comes home she sees Sweetie's third mistake: cleaning Rarity's room. Rarity finally cracks and yells at her, saying that Sweetie has destroyed her inspiration for her new fashion line by cleaning up her "organized chaos". Sweetie Belle points out the obvious, that her sister gets upset with her whenever she makes a mistake, only to have Rarity proclaim that her own mess is exempted because it was her own. Everything Sweetie Belle has done was well-intended, but has only succeeded in making Rarity angry.

Disappointed in her inability to do something right for her sister, Sweetie Belle then goes for a walk and meets Apple Bloom. Apple Bloom suggests she and her sister participate in the Sisterhooves Social, an annual competition in which sisters compete against other sisters in an elaborate obstacle course. Sweetie Belle invites Rarity to the event, but Rarity refuses to go on the pretense of the contest being uncouth. Sweetie Belle, while being very disappointed and angered, proclaims that she would be better off alone. In the end, the two argue, ending with Sweetie Belle telling Rarity that they aren't sisters anymore, and that each of them would be better off sister-less. Sweetie Belle heads on over to Sweet Apple Acres where Applejack is doing chores with Apple Bloom. Seeing their enjoyment as they perform tasks together, Sweetie Belle notes that Applejack, unlike Rarity, is what a sister should be - kind, patient, active, and fun.

Later, as Rarity restarts her fashion line, she is struck by a new idea due to Sweetie Belle's organization and completes her new line, "Full Spectrum Fashions". She begins to forgive Sweetie Belle, but quickly stops herself, only to soften again when she finds the sweater Sweetie Belle shrank was perfect for Opalescence, and not herself. Rarity's ultimate realization of her mistake comes up after looking, a second time, at the picture that Sweetie Belle made her. While decorating a dress with baby blue sapphires, Rarity decides to take a few from her sister's picture. The picture is revealed to be an image of herself and Sweetie Belle superimposed into a heart made out of sapphires. This makes Rarity realize that what she said and did was wrong.

Rarity goes to Sweet Apple Acres in order to apologize, but finds that Sweetie is with Applejack and does not want to be with her anymore. Sweetie Belle then claims Applejack as her big sister, much to the dismay of everypony. Sweetie Belle continues berating Rarity while praising Applejack, going so far as to say that Rarity could learn how to be a better sister from Applejack. Rarity pleads for Sweetie to return, but shows that she hasn't fully learned the true meaning of sisterhood as she continues suggesting activities that appeal to her rather than Sweetie, hinting that she still does not understand. Sweetie Belle is not impressed and storms off angrier than before. Applejack helps Rarity understand what sisterhood means (comparing it to apple pie) and Rarity finally realizes that she has not been a good sister to Sweetie Belle after all, so she decides she must do whatever it takes to regain her sister.

At the day of the event, which takes place at Sweet Apple Acres, Apple Bloom and Applejack agree that Applejack can be Sweetie Belle's sister for the day. They enter the race together, but Applejack falls into the mud of the first obstacle. Rarity emerges from the mud, wearing Applejack's hat and remaining silent throughout the race, making Sweetie Belle believe she's still racing with Applejack. Rarity's blue eyes are still visible though, as opposed to Applejack's green, though her eye style is the same as Applejack's. They manage to jump over the haystacks, quickly eat the apple pies, fill a jar with grape juice, and carefully place their egg from a hen house into a basket. While they don't win the race, only coming up short to Berryshine and Piña Colada, Sweetie Belle says she doesn't mind because she had so much fun. Applejack's hat falls off, revealing a white horn. Sweetie Belle wipes the mud from Rarity's flank and, after seeing her three-diamond cutie mark, discovers she'd been racing with her own sister the entire time, while Applejack stayed under the mud the entire race and only now surfaced.

Sweetie Belle finds out that Applejack, Rarity, and Apple Bloom were all in on the plan. The sisters make up, and Rarity offers to go to the spa as a treat, but the rest of the girls burst out laughing, thinking Rarity is just joking, but she insists she wasn't.

The sisters compose a letter to Celestia together, in which they inform her that, while being sisters is wonderful, it often requires teamwork, sometimes is about compromise, sometimes is about accepting each other's differences, but mostly is about having fun. In the end, they disagree again, over whether it's okay to get one's hooves a little dirty or a lot dirty when having fun. Since Spike is writing the letter he gives them a happy medium of a medium amount of dirty (not too little, not too much, just right), and they agree on this compromise.

Rarity: I didn't know you could burn juice.

Rarity: My inspiration room! What did you do? What did you do?!
Sweetie Belle: When I saw the big mess in your room, I thought I'd clean it up for you.
Rarity: This wasn't a mess! It was organized chaos!

Rarity: Oh, Sweetie Belle! My one and only sister! What have I done? All the time I could have spent with you was wasted complaining and wishing you were gone! [crying dramatically] Woe is me! No! I must get her back! I must! As Celestia is my witness, I shall never be sisterless again!

Applejack: Bein' sisters is like... apple pie! You can have amazin' apples, and you can have a wonderfully crispy crust, but only together can you have a perfect apple pie.
Rarity: [to herself] But apart, all we are is just a pile of mush and some crumbly, dry mess. [gasps out loud] I know what I need to do! I just hope it isn't too late!

Granny Smith: Is this thing on? [turns megaphone] I don't think this thing is on. Hellooo? [Big McIntosh whispers in her ear] Whazat? Eh? Uh...Well, you had to say so...confangled modern doohickey.

Rarity: Us. I did it for us. You see? We are apple pie!
Sweetie Belle: Huh?
Rarity: I'll explain later... 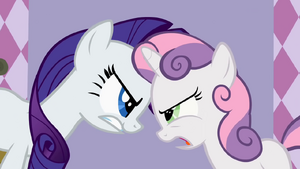