Sky Beak first makes a brief appearance in School Daze - Part 2 when Applejack convinces him and Seaspray to let Silverstream re-enroll at the School of Friendship.

In Surf and/or Turf, Sky Beak and Ocean Flow appear when Twilight Sparkle and the Cutie Mark Crusaders travel to Mount Aris. They arrive in the middle of the Hippogriffs' "Glad to Be a Hippogriff" Festival, and Sky Beak engages in festival games with his fellow Hippogriffs. Twilight approaches Sky Beak to sign his daughter Silverstream's field trip permission slip, and Sky Beak (showing Twilight great admiration) invites her to join in on some of the festival's activities.

Later, Twilight and the Crusaders travel with Sky Beak's son Terramar to Seaquestria, where they meet Terramar's mother Ocean Flow. Ocean Flow is as delighted to meet Princess Twilight as Sky Beak is, and she offers to show her Terramar and Silverstream's baby pictures, much to Terramar's embarrassment.

Even later, Twilight finds herself pulled in two directions when Sky Beak and Ocean Flow each invite her to join in more Hippogriff and seapony activities. When the two races meet on the Mount Aris beach, Sky Beak and Ocean Flow greet each other in positive spirits. Having been summoned by the Cutie Map to help Terramar deal with the dilemma of choosing between his two homes, the Crusaders organize a picnic on the beach for both Hippogriffs and seaponies.

Sky Beak and Ocean Flow approach Terramar and apologize for making him feel like he had to choose between worlds. They tell him he can continue going back and forth as he pleases, much to his delight.

Silverstream mentions her mother in The Hearth's Warming Club.

In Uprooted, Sky Beak and Ocean Flow appear signing a permission slip for Silverstream. In Student Counsel, Terramar mentions that his parents are leading search parties between Ponyville and Mount Aris for the missing Silverstream. In A Horse Shoe-In, Sky Beak attends a parent-teacher conference at the School of Friendship with Silverstream and Big McIntosh, but Big Mac's limited speech results in a communication breakdown.

In The Ending of the End - Part 2, Sky Beak is present during the final battle against Queen Chrysalis, Lord Tirek, and Cozy Glow, and Ocean Flow appears when Silverstream rallies the seaponies for the battle. In The Last Problem, Sky Beak attends Twilight Sparkle's coronation ceremony. He also briefly appears in Pinkie Pie's group shot during The Magic of Friendship Grows.

Depictions in other media

Sky Beak is a character in Gameloft's mobile game, and serves as a boss during the "Convocation of the Creatures!" event. His bio states "Terramar's dad is SUPER into Hippogriff culture -- specifically all the aerial bits. Don't even get him started on the history of Harmonizing Heights!"

Sky Beak: And now, I officially open the "Glad to Be a Hippogriff" Festival!

Sky Beak: Let's show the princess some real Mount Aris hospitality! To the refreshment tent for a stein of salmon juice!

Ocean Flow: Both my children are so smart. Would you like to see their baby pictures?

Sky Beak: Princess Twilight, you're back! And just in time for the screeching competition.

Ocean Flow: Yoo-hoo! Princess! We're having a seashell-crafting circle. Care to join us?

Sky Beak: There seems to be a lot of nuance here, and I just want to make sure I understand exactly what you're saying. So what are you saying?

"Happy to be a hippogriff? Only every day!"
— Enterplay collectible card game Friends Forever #64 U card of Sky Beak

"Satisfied with being a seapony? All the time!"
— Enterplay collectible card game Friends Forever #80 U card of Ocean Flow 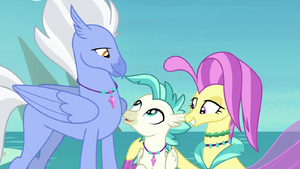