Sky Stinger is a male Pegasus pony and Wonderbolts cadet who first appears in Top Bolt.

Sky Stinger first appears in the season six episode Top Bolt as an applicant to the Wonderbolt Academy. During the classroom portion of applicant testing, he is portrayed as very self-confident and egotistical; he is certain of his ability to become a Wonderbolt, and he dismisses the need to go over basic flying techniques with volunteer instructors Twilight Sparkle and Rainbow Dash.

However, Sky later demonstrates genuine concern for his best friend and wingpony Vapor Trail, who he believes is a weaker flyer than himself and in need of improvement. During freestyle training, it is revealed that Sky Stinger is unable to perform aerial tricks without Vapor Trail's hidden support, and this has been the case ever since the two first met when they were young. Sky Stinger is also revealed to have come from a large family where he had a difficult time getting attention.

Twilight and Rainbow Dash help Sky improve his aerobatics under the guise of helping Vapor Trail, but he still insists that he doesn't need practice and will easily make it into the Academy. When Vapor Trail reveals that she's been supporting Sky the whole time, he is mortified. He accuses Vapor of trying to humiliate him and steal his thunder, and the two have a harshly worded falling-out.

As a result of his argument with Vapor, Sky's confidence is ruined to the point where he makes no effort to impress Spitfire. With Twilight and Rainbow Dash's guidance, Sky makes amends with Vapor Trail. He trains hard to improve his own flying skills while at the same time giving Vapor tips on how to improve hers. In the end, both Sky and Vapor impress the testing instructors enough to be granted entry into the Wonderbolt Academy.

In the season seven episode Parental Glideance, Sky Stinger makes a cameo appearance walking alongside Vapor Trail at the Wonderbolt Academy. They also briefly appear talking together at the Academy in Secrets and Pies.

Sky Stinger is a character in Gameloft's mobile game, and serves as a boss during the "Wonderbolt for a Day" event. His in-game bio states, "He thinks he’s all that, but he’s got lots to learn: His lack of flight skills is a serious concern."

SKY STINGER is a new recruit at Wonderbolts Academy. Brash and arrogant, he was sure he would be a shoo-in for the program. When it turned out that his best friend, Vapor Trail, was secretly helping, his confidence was shattered, and they had a brief falling-out. Ultimately, he practiced his flying and become[sic] a cadet!

In the Defenders of Equestria expansion set of Enterplay's collectible card game, card #11 R of Sky Stinger lists the quote "If I've learned anything recently, it's that everypony needs a little help once in a while. Now c'mon, let's get out there and show them what we've got!"

Sky Stinger is featured in the "Wonderbolts Quest" section of the My Little Pony: Cutie Map Quest A Punch-Out & Play Activity Book, which was released prior to his debut in the series. In the activity book, Sky is referred to as female.

"I nailed that flipping loop. I'm actually surprised you're still here. Thought I blew you away."
— To Twilight Sparkle and Rainbow Dash, Top Bolt

"I'm already the best, and everypony's gonna know it when I'm asked to join the Academy tomorrow. [...] I wouldn't be surprised if they asked me to become a Wonderbolt straight out of the trials. Boom, dream achieved."
— Top Bolt

"So you're saying I can be the... Princess of Flying?"
— To Twilight Sparkle, Top Bolt

"You were great! Even though you can out-fly me, you can be my wingpony anytime."
— To Vapor Trail, Top Bolt

"If I've learned anything recently, it's that everypony needs a little help once in a while. Now c'mon, let's get out there and show them what we've got!"
— Enterplay collectible card game Defenders of Equestria expansion set card #11 R of Sky Stinger 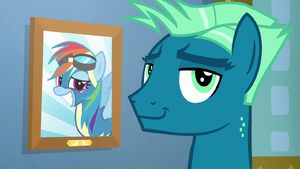