Sleepless in Ponyville is the sixth episode of the third season of My Little Pony Friendship is Magic and the fifty-eighth episode overall. Scootaloo has nightmares during a camping trip after hearing Rainbow Dash’s campfire stories. The title is a reference to the film Sleepless in Seattle.

In the week before the episode's scheduled premiere, show head writer Meghan McCarthy wrote on Twitter that the premise for the episode had been submitted on July 29, 2011.[2][3]

This episode was nominated for a Leo Award for "Best Overall Sound in an Animation Program or Series" for Marcel Duperreault, Todd Araki, Jason Frederickson, and Adam McGhie.[4]

Rainbow Dash leaves Scootaloo outside the tent. Scootaloo’s fears become more real when she is alone. She quickly enters the tent and falls asleep. Scootaloo “wakes up” when she hears a pony's voice outside. When she exits the tent, Applejack and Rarity's tents are gone. Scootaloo runs out of the clearing. When she looks back, she sees The Olden Pony following her.

Scootaloo slows down and comes face-to-face with The Olden Pony when she turns around. When the pony asks about her horseshoe, Scootaloo gallops back to the campsite. On the way back, she sees Princess Luna in the trees. Scootaloo returns to the tent and finds that The Olden Pony has taken Rainbow Dash’s place.

Scootaloo wakes up from the nightmare and attempts to prevent herself from going back to sleep.

In the morning, Scootaloo suffers from lack of sleep. However, she lies to Rainbow, saying that the previous night was the "best night ever."

Scootaloo sleeps in the cart as the ponies continue traveling. She wakes up when Applejack mentions that they may not reach the campsite before dark. Scootaloo rushes to check the path ahead and pokes fun at her fellow Crusaders' fear.

Scootaloo has a difficult time staying awake when traveling ahead on the path. She eventually returns to the other ponies. Worried, Applejack walks with Scootaloo, who is extremely jumpy. Scootaloo denies Applejack's concerns and moves away to pull the cart.

The ponies stop for the night in a large cave, and Scootaloo collects firewood. She only gathers a small amount because she is frightened by eyes she sees in the forest. At the campfire, Scootaloo unsuccessfully attempts to tell a happy story. Rainbow tells the story of The Headless Horse despite Applejack’s interjections. When Rainbow finishes, Apple Bloom and Sweetie Belle are frightened by the sparks from the fire. However, they quickly realize there's nothing to be afraid of.

Scootaloo suggests singing campfire songs to stall before bedtime. Sweetie Belle sings "Ninety-nine buckets of oats on the wall." When she finishes, the ponies go inside the cave to sleep. Scootaloo continues to find alternatives to sleeping, such as a dance competition or game of hide-and-seek. Applejack attributes this to Scootaloo's desire to spend time with Rainbow Dash.

In her dream, Scootaloo is pursued by The Headless Horse’s hoofsteps in a forest. The Headless Horse approaches her when she falls down a hill. However, Princess Luna appears and banishes the Horse. She explains that it is her duty as the princess of the night to step into ponies' dreams. Luna tells Scootaloo that when she wakes up, her greatest fear will still exist. Scootaloo admits that she is afraid that Rainbow Dash will find out that she was scared by the campfire stories. Luna says that everypony must face his or her fears. Scootaloo is uncertain, but the dream begins to dissipate.

Once awake, Scootaloo is still scared by Rainbow Dash's story of The Headless Horse. She leaves on her scooter when she mistakes Rainbow Dash's snoring for the Horse's whinnying. She slides down a hill and toward a river canyon when her scooter hits a rock. When she falls into the river, it carries her toward a waterfall.

Rainbow Dash saves her as she falls over the waterfall and asks why she was outside. Encouraged by Princess Luna’s silhouette in the moon, Scootaloo admits that she was scared and why she pretended to be brave. Rainbow Dash says that she was also scared when she first heard those stories. She promises to take Scootaloo under her wing, and the two hug. The next day, the ponies reach the Winsome Falls, large waterfalls of liquid rainbow. When the other ponies start a race, Rainbow and Scootaloo fly after them together.

In a dreamscape forest, The Olden Pony asks Scootaloo for her rusty horseshoe. Scootaloo resolves to face her fear. When she does, Rainbow Dash appears and gives the horseshoe in question to The Olden Pony. She thanks them and walks away. On the side, Princess Luna winks and smiles at Scootaloo’s solution.

Rarity: I despise camping! All of that... urrgh... nature.

Applejack: If it doesn't have a head, then how in tarnation does this pony know where it's goin'?
Rainbow Dash: It's headless, not brainless. [spookily] ...looking for little lost ponies—
Applejack: So where's its brain?
Rainbow Dash: Ugh.

Princess Luna: Everypony has fears, Scootaloo. Everypony must face them in their own way. But they must be faced, or the nightmares will continue.

Sweetie Belle: I call sister teams! Last pair to make it to the falls is a moldy carrot!
Rarity: Ugh, if you insist. [giggles] It is so on!

The Olden Pony: Who's got my rusty horseshoe?
Rainbow Dash: Here it is, for pony's sake. Now take it and stop all your moaning.
The Olden Pony: Thank you, and have a nice day. 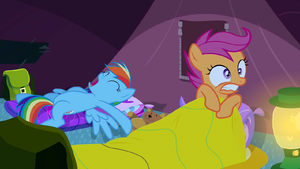