Dashie being awesome while smiling.

What a perfect shot of Ponyville.

Walking along minding her own business.

Shoeshine and Cherry Berry having a nice conversation.

Two ponies talking to each other.

What a twisted hairdo!

Golden Harvest jumping out of the way.

Shoeshine jumping out of the way.

Granny Smith, out on a stroll.

Granny Smith, what are you doing?!

Coming to a stop.

Looking for a ramp to ride over.

I can do this!

The townsfolk are really amazed.

Scootaloo is falling with style!

Wait, did Rainbow Dash just compliment me on my moves?!

Excuse me.
Add a photo to this gallery

This filly is slowly turning into a mini-Rainbow Dash!

Apple Bloom seems amazed by this.

"She really said that!"

Sweetie Belle seems surprised with Scootaloo's arm around her.

I am too happy to notice your confused expression.

What a long neck you have Scootaloo. Remember in Hearts and Hooves Day?

I guess, I should work on my moves more.

Are you sure Scootaloo?

Is that Rainbow Dash outside?

Off, goes the most awesome flier.

You can always come camping with Applejack and I.

Sweetie Belle, it wouldn't be an adventure without all three CMC's.

Sweetie Belle comes up with a plan.

Scootaloo and Apple Bloom meeting up with Applejack

I brought the bug spray!

I brought the canteen!

Applejack telling Scootaloo that Dash is already at their camp site.

You are a pack rat!

A nice shot of Rarity's pleasant dress or outfit, whatever you call it.

Making a point of being prepared...a bit too prepared.

When the sunglasses come down you know Rarity is right.

But wait, didn't you say that you invited Rainbow Dash too?!

Oh right, I knew I could trust Applejack.

This is some nice scenery.

Doing the long hike in the hills.

Rocks in the formation of a circle

Oh my gosh, she's even more cool in person.

Scootaloo is a circle.

No need to worry about me...

We are not impressed.

The Apple sisters are preparing to build their own tent.

A playful side of Rainbow Dash.

What's that box Rarity's pulling out?

A moment between Scootaloo and Rainbow Dash.

A moment between Rainbow Dash and Scootaloo.

A blast of wind

Rarity is setting up her own tent which happens to be the biggest.

Rarity, I can't tell if you're the world's worst camper or the best.

Because no camper should be without a portable house

Gotta have some creature comforts.

Sweetie Belle, running over to fetch something from Rarity.

Scootaloo and Apple Bloom, laughing at Rainbow's imitation of Rarity.

"Seriously though, could you get some wood for the fire?"

"Of course!"
Add a photo to this gallery

Lighting the fire just like ye ponies of olde! What...?

Now is everypony ready for some campfire stories?

Sweetie Belle, climbing onto the log beside Apple Bloom.

Scootaloo, pointing to the sky.

Scootaloo standing on one hoof.

Oh please not that one.

Yeah this is making me uncomfortable.

Not lying about it.

"Ok, maybe not the best story, bit it's still the scariest" (I don't know, that one was definitely traumatic for Rarity)

Fluttershy wants to hear it too!

Who has my Rusty Horseshoe??

We will never sleep again!

Rainbow Dash is one brave pony.

Time to hit the hay.

You got something on your back there, Applejack.

Scootaloo using a severed leg as a microphone.

Rainbow Dash putting out the fire.

Scootaloo acting cool for her idol.

But there's nothing there!

My imagination is scary!

Gotta go far away from here!

Who does that bear belong to I wonder...

Huh, what was that?

....asleep.
Add a photo to this gallery

When did we get transported to a shadowland?

Eww, you need some makeup. Stat.

You there Rainbow Dash?

Do I hear a mosquito or something?

Hmm, it's almost as if she's trying to make sure Sweetie never asks her to camp again

"To get to spend time with my little sister."

"It just feels like this cart is getting heavier all the time!"

Silly Scootaloo, you aren't a suitcase.

Scootaloo pulling her scooter out of the luggage

Now how did her scooter end up in all that luggage, we may never know.

At least Rarity is off the couch.

A bump wakes her up

It's not always simple staying awake.

Over the crocodile across the creek

The bear is trying to eat the fish.

"And with that time on the course, you're gonna be moving on to the Wipeout Zone!"

That scooter had really thrusted this filly!

Up in the air swift and sleepy

Landing on the bush

Did you all see my amazing landing?

That woke her up!

This would be so much better if I wasn't terrified

"Just thought I heard something."

Sweetie Belle's eager for some relief!

At the second campsite

That's the same cave where the Ursas lived...

Is something the matter Scoots.

Come on Scootaloo! Come on!

As if I didn't get enough chicken problems from the fandom.

Faceplant on the ground

Brr! It's cold out here!

When's Scootaloo coming with that firewood?

It's all I could find!

"There aren't that many trees out here." Oh really?

Rainbow fusses with a marshmallow.... maybe warming it up.

How about I tell tonight's story?

Just make sure it's a horrible one.

It's not even scary.

No offense, Scoots, but G3 is more existential horror.

I didn't mean quite that kind of horrible.

Let me show you how it's really done.

She's on to you Rainbow Dash, you might as well end it now.

No one to hug.

"You'll be safe with me tonight."

Now let's do like a wave function and collapse.

Boy, she must've been tired!

Especially when you've been delibrately deprived.
Add a photo to this gallery

Cornered by the headless horse.

Gasp! The Headless Horse! It's all over!

The Mare in the Moon is back.

Luna, Princess of the Night (and dreams, apparently).

"Shouldn't you be in Canterlot?"

"I am the Princess of the Night."

The reality around me is not real.

"Really what frightens you the most?"

"The nightmares will continue."

Scootaloo is waking up.

Remember to face your fears, Scootaloo. I'll be in your heart.

"But the headless horse isn't!"

Why is the simple act of perking ears so cute with these ponies?

Rainbow doesn't want to hear you.

"Which means it doesn't have a mouth."

How does it whinny then? Never mind

Flight of the Rainbow.

Rainbow Dash to the rescue.

D'aww, look at that face.

Sure that really nopony overhears my secret?

Come here Scoots, let me tell you something.

That other time I saved a filly from going over a waterfall? I was an ultra-girly earth pony then.

"Just don't go falling into anymore rivers in the middle of the night."

Aww, they hug for the first time!
Add a photo to this gallery

Rainbow looks cool with the way her wings are spread out.

I believe I can flyyyyyyy!

Aw man, not you again.

Can Luna look any cuter from this angle?

The winks have been doubled!

A blink in reply.
Add a photo to this gallery 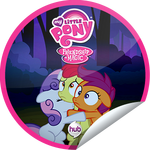 Add a photo to this gallery
Retrieved from "https://mlp.fandom.com/wiki/Sleepless_in_Ponyville/Gallery?oldid=2159042"
Community content is available under CC-BY-SA unless otherwise noted.