Slice of Life is the ninth episode of the fifth season of My Little Pony Friendship is Magic and the show's one-hundredth episode overall, celebrated as a milestone episode. The phrase "slice of life" refers to works of fiction that depict mundane everyday events.

While the Mane Six are busy battling a monster, the citizens of Ponyville try to get to a wedding on time.

The show's crew first publicly discussed the episode on a My Little Pony panel at the 2014 San Diego Comic-Con, where they mentioned the episode's focus on background ponies.[1] Meghan McCarthy said in a Q&A session in PonyCon Australia 2015 that the episode will not focus on the Mane Six but rather on background ponies.[2] Leading director Jayson Thiessen hinted that "right around halfway look fo [sic]" on Twitter in late April 2015.[3]

The episode is celebrated as a milestone episode by Hasbro and its affiliates.[4][5][6][7] Storyboards included in season five's teaser trailer briefly feature Cranky Doodle Donkey and Matilda.

According to episode writer M. A. Larson, two working titles for the episode were "A Tour of Ponyville" and "A Tour of Equestria", and the episode originally featured Twilight Sparkle in a more prominent role prior to his involvement.[13] In Larson's initial drafts, the episode also featured several other supporting characters, including Flash Sentry, Coco Pommel, and the royal guards, whose scenes had been cut for time.[13][14] Jim Miller also stated on his Twitter that the episode was originally pitched as an Anthology type of episode, but ended up being rejected with Hasbro wanting a Narrative episode instead.[15]

Composer William Anderson wrote that he is working on some "CAHHRAZY stuff" for this episode and that "Jayson [Thiessen] and Jim [Miller] really threw some fun opportunity my way."[16] Cellist Tina Guo worked alongside with Anderson on the music for the episode.[17] Amy Keating Rogers had been assigned to write this episode and M. A. Larson had been assigned to write The Lost Treasure of Griffonstone, but due to scheduling conflicts they swapped episodes with each other.[18]

At Cranky Doodle Donkey's cabin, Matilda looks at photographs of Cranky and herself in her scrapbook and pastes inside an invitation for her and Cranky's upcoming wedding. Cranky returns from shopping and mentions that everyone in Ponyville was getting dressed and asking him about the wedding, even though the ceremony isn't for another day. However, when Matilda looks at the invitations again, she discovers a misprint that says the wedding is a day early.

With everyone in town and the princesses expecting a wedding, Matilda runs off to find her wedding planner and move all preparations to that afternoon. Cranky goes to complain about the misprint to the pony who made the invitations, Derpy, who offers Cranky a muffin in consolation.

Derpy and the Doctor

At the Ponyville cafe, Derpy has lunch with Dr. Hooves, as Twilight Sparkle dashes past. She addresses him as "Doc" and expresses how she wishes she could go back in time and fix the mess she made. Dr. Hooves takes Derpy to his house and goes on a prolonged tangent about the wonders of mathematics and science. When Derpy reminds him about the wedding, Dr. Hooves remembers that he still needs his suit tailored.

He goes to Carousel Boutique in search of Rarity, but she isn't there. He brings his dilemma to DJ Pon-3's attention, and she takes him to the well-dressed Jeff Letrotski at the Ponyville bowling alley. Letrotski agrees to tailor Dr. Hooves's suit if he plays as the fourth member of his bowling team. Unsure of the physics involved in the game at first, Dr. Hooves eventually agrees.

Meanwhile, Twilight assembles her friends outside as various Ponyville ponies watch them. Apple Bloom thinks that a monster is about to attack the town, which Octavia Melody bemoans will interfere with her music practice. As Matilda comes by looking for Pinkie Pie, a monster, a ferocious bugbear, suddenly appears, and the Mane Six run out to fight it.

With Pinkie Pie preoccupied with the bugbear, Matilda asks Amethyst Star for assistance with the wedding plans. When Derpy appears to apologize for the invitation mix-up, Matilda cries out that she needs flowers. Unfortunately, Daisy, Lily Valley, and Rose don't have Matilda's flowers yet.

Meanwhile, a harried Cranky Doodle shouts at a jeweler about his wedding ring.

As Dr. Hooves continues to bowl, Derpy appears and asks to use his flameless fireworks in place of flowers for the ceremony. Before Dr. Hooves could warn her about the fireworks' volatility, she flies off.

At the Ponyville Day Spa, Matilda continues to dread about the wedding. She meets Steven Magnet, an old friend of Cranky's who tells her that, during all their adventures together, all Cranky cared about was finding Matilda again. This calms Matilda down a little, saying what's most important is that she and Cranky are together and that the wedding is just a ceremony. However, Steven makes her nervous again when he bluntly mentions how important the wedding is to everyone else.

DJ Pon-3 returns to her and Octavia Melody's cottage, where Octavia practices music for the ceremony. When Octavia laments how dull traditional wedding music is, DJ Pon-3 enters and provides backup beats to her cello, creating a fresh and invigorating sound. However, Octavia soon realizes that she's going to be late to the wedding, and DJ Pon-3 transports her there on a mobile DJ booth.

Along the way, DJ and Octavia pick up numerous other wedding guests, including Matilda. They hit the Twilicane, dropped by Lemon Hearts, which upturns the vehicle and tosses all the wedding guests into town hall. Gummy watches on from Sugarcube Corner, deadpan, and has an internal philosophical contemplation. At town hall, all the guests are seated; Princess Celestia and Princess Luna quietly bicker about forgetting to bring a wedding gift, Princess Cadance consoles a crying Shining Armor, Dr. Hooves wears a scarf instead of his suit as he planned, Derpy places the flameless fireworks, and Sweetie Drops announces that the bugbear has been defeated before patching things up with Lyra. As the last of the guests arrive, the ceremony begins, and Derpy latches the town hall door right as the Mane Six are running towards it in the distance.

Star of one's own story

After the guests are seated and Steven Magnet helps Cranky with his toupee, Mayor Mare begins the proceedings. She speaks of how love has brought not only Cranky and Matilda together but also everyone around them and that everyone is the star of their own story; everyone has a role to play, from the main characters to the minor ones. The mayor officially weds the two donkeys, and as they kiss, the flameless fireworks ignite and light up the hall, and Dr. Hooves excitedly realizes that love was needed to ignite them.

Outside the hall, the Mane Six watch the ceremony through the window. Twilight tells her friends how fortunate they are to live in Ponyville, and she brings them together for a group hug.

Cranky Doodle Donkey: You told me you could do it for half what the others charged, and then you sent the invitations to everypony in town with the wrong date! [snorts]
Derpy: Muffin?

Dr. Hooves: I'm sorry, gentlecolts, but I will not bowl. The splits, the spares! There are simply too many variables!
Jeff Letrotski: Variables? What are you talking about, man? Just throw the ball straight!
Dr. Hooves: Hold on. Straight?
[dinging]
[bowling strike]
Dr. Hooves: Very well. I'll try your "straight" technique. It just might be crazy enough to work.

Gummy: [narrating] What is life? Is it nothing more than the endless search for a cutie mark? And what is a cutie mark but a constant reminder that we're all only one bugbear attack away from oblivion? And what of the poor gator? Flank forever blank, destined to an existential swim down the river of life to... an unknowable destiny? [licks]

Sweetie Drops: So, uh, you didn't happen to mention our earlier conversation about my [hushed through gritted teeth] secret identity [normal] to anypony, did you?
Lyra Heartstrings: No. I did not. And you're not the only one with a secret, y'know. You know those expensive imported oats you were saving for a special occasion? I cooked them up and ate them! All of them! [laughs] It's sort of thrilling to reveal your deepest, darkest secrets!
Sweetie Drops: [laughs] That's what best friends are for.

Princess Celestia: [hushed] Next time, you can just bring your own gift, and I'll bring mine.
Princess Luna: [hushed] Fine.

Mayor Mare: Cranky searched all across this great land of ours to find Matilda, and no matter what obstacles kept them apart, love would finally bring them together, just as it has brought all of us together now. It's remarkable to me how a story like Cranky's search for Matilda could fill this room with such a unique collection of ponies! It makes you realize that everypony is the star of their own story. And it's not just the main characters in our stories that make life so rich! It's everypony – those who play big parts and those who play small. If it weren't for everypony in this room and many more who couldn't be here today, Cranky and Matilda's lives wouldn't be as full and vibrant as they are. 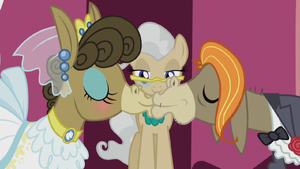