Cranky and Matilda in Manehattan.

Please don't make us remember when that happened

"I'll never understand the ponies in this town!"

"Everywhere I went, they were all gussied up and lookin' at me funny! Kept asking if I was "nervous"!"

"Did they forget the wedding is tomorrow?"

"Oh, maybe they're just as excited for us to be married as I am."

"...when they realize they've got the wrong date."

"The invitations are wrong!"

"This says the wedding is today!"

"Everypony in town got these!"

"The princesses have even RSVP'd!"

"I told you we should have eloped!"

"You told me you could do it for half what the others charged, and then you sent the invitations to everypony in town with the wrong date!"

Cranky is not a happy donkey.

And thus the line between fanfiction and regular fiction started to dissipate.

"Muffin?"
Add a photo to this gallery

Derpy and the Doctor

Why is Twilight in such a hurry?

The one and only Bulk Biceps is back in town!

"I really messed up on those invitations!"

"Hmph! Perhaps that explains why I never got mine!"

"I told Cranky I could get 'em printed for cheap..."

"...but that meant hiring somepony with no experience using a printing press."

Never send a foal to do a stallion's job.

Where's Diamond Tiara when you need her?

"Oh, I wish there was a way I could go back in time and fix all this."

Is this a reference to Portal or Doctor Whooves Adventures?

"I was working off a cutting-edge theory..."

Derpy flying a plane (or not)

Decades – centuries, really – of research and experimentation, and I nearly had it cracked!

"Turns out there's a magic spell for it."

"I never could quite figure out how to get them to ignite."

"How did you learn to make all this stuff anyway?"

"Ever since a particularly traumatic experience as a foal..."

"...I've been looking for ways to make sense of the world around me."

"Now, why did we come here again?"

...with today's date instead of tomorrow.

We must find a way to fix this problem.

A lot of running is still involved.
Add a photo to this gallery

The Doctor meets the Dude

At this point, every fanboy in the world never stopped squealing with delight for the remainder of the episode.

Um, how can you not see that she's wearing headphones?

Those headphones aren't connected to anything. Where is the music she's listening to coming from?

Pezuña, apparently, is doing a long stretch in Gelding Grotto.

"Why have you brought me here?"

And there's The Dude, or, uh, His Dudeness, or Duder, or El Duderino if you're not into the whole brevity thing.

How much Lebowski/Doctor Who crossover fiction did they have to read to come up with this scene?

"What's this word you keep using--"

Just an ordinary day in Ponyville.

"Do we know what they're on about?"

We see our "Main" characters of this episode have a discussion.

"The way they're huddled up like that, I'd say it's either a friendship problem or a monster attack."

"I'm performing at the ceremony this afternoon..."

"How am I meant to practice with a monster invading Ponyville?"

"Maybe it's just a friendship problem, and it'll all be cleared up in half an hour or so." (Or, technically, 22 minutes give or take a few ad breaks.)

What in the name of Celestia is that?! And where did it come from?!

Oh, hey, it's Peanut Butter Pony! And oh! Apple Bloom and Twist are together again!

"I'm to move an entire wedding from tomorrow to today!"

"But nopony's asked me to organize anything since Twilight came to town." (Easy, Amy, she's asking you to organize a wedding, not help her move into a new apartment.)

"I used to be the best organizer in all of Ponyville. You bet I'll—"

Pinkie is being given a noogie by the Bugbear.

"Come on! We better get to the salon before that monster flattens it!"

"I feel so bad about the invitations!"

"Is there anything I can do—"

The flower ponies who overreact to everything make their triumphant return!

"We don't even have Matilda's flowers in yet!"

"This is a disaster!"

A monster with an attempt to destroy everything on its path?

Eh, everypony knows it's just another usual day in Ponyville.

Look girls! Over there! No, There!

It could be worse.

"Oh, the horror! The horror!"
Add a photo to this gallery

"I have to admit, When Matilda said to have this place ready by today..."

As you can tell already, Lyra Heartstrings and Sweetie Drops are the best of friends.

Bon Bon hears something in the distance.

"A creature from the Everfree Forest?"

I think it's a bug bear or something.

What are you talking about, Bon Bon?

"This record will self-destruct in five seconds."

Never thought it would track me down.

Are you saying our friendship was a LIE?!

Lyra and The Liar.

B-But the lunches, the long talks...

The benches we sat on...none of that was real?

Better get out of here before the cops find me.

Don't think this is over!

Am I the only one around here ... who thinks we needed an experienced bowler?

"The flameless fireworks are extremely volatile!"

"We can handle anything."

"Well, what'd you expect, a bugbear?"

"In all that we've been through together, the only thing he ever cared about..."

"Well, that and a baldness cure!"

"The wedding isn't the important thing – the marriage is."

"The wedding is EVERYTHING!" Yeah...That's not helping, Steve

You're a horrible sea serpent, Steven!
Add a photo to this gallery

Not even the fandom could have come up with this crazy domicile.

"Ugh, all these wedding songs are so..."

"I want Matilda and Cranky's wedding to be special."

Special? Leave that to me, Octy.

Frederick Horseshoepin would not approve this cacophony.

Vinyl's use of the pedals and no hint of a beat?

"Thanks, but I'm not sure that's appropriate for a wedding, is it?"

Less pedal effects and lock in with the beat!

For those about to rock (and tie the knot)...

...that if you play an instrument well enough, you start to shine.

Are you thinking the same thing I am?

Let's get the performance started!

I didn't know it was etiquette to bob your head and spin a cello.

The music is so intense... it snapped her collar...

DJ Pon-3 the master of Dubstep commands you!

The perfect DJ has to rock with every possible limb.

Uh, Octavia, are you experiencing an adrenaline rush? Don't wreck it! Actually they both look a little wicked right here!

Wait! We need these!

"STOP! I'm going to be late for the wedding!"
Add a photo to this gallery

Heading to the wedding ceremony

Looks like both versions of Vinyl have a liking for sick rides.

Never thought we'd see the day where My Little Pony would literally jump the shark.

Just a normal day in Ponyville.

Sarge: Wow, knocked the black right off ya.

We're heading for that random house.

I got yer back, jack!

Sweet use of the bow, Octavia.

Oh, look! It's the rejected suitors!

AAAH! THEY'RE AT IT AGAIN!

All aboard the DJ express!

Now with a top view seat!

The bowling is the third official theme of this episode now.

Seriously though, how many ponies can fit on that thing?

Cranky! Don't look to your right! It's bad luck if you see the bride here!

GET OUT OF THE WAY, GRANDPA!

Oh, so that's where Twilight threw that!

Oh look! It's the Twilicane!!

Ponies in the air in the land of hypocrisy!

"Is it nothing more than the endless search for a cutie mark? And what is a cutie mark but a constant reminder that we're all only one bugbear attack away from oblivion?"

"And what of the poor gator? Flank forever blank, destined to an existential swim down the river of life to... an unknowable destiny?"

And the big wedding cake - check!

Agree.
Add a photo to this gallery

Even Celestia and Luna have sibling fights.

"He always cries at weddings." (I don't remember him crying at his own wedding.)

I don't think you can say that that's "liquid pride".

"You didn't happen to mention our earlier conversation about my... secret identity... to anypony, did you?"

No. But I have secrets, too.

"And you're not the only one with a secret, y'know."

"You know those expensive imported oats you were saving for a special occasion?"

"I cooked them up and ate them!"

What's a bucket of oats and a secret life between best friends?

"Next time, you can just bring your own gift, and I'll bring mine."

Fun fact: In Doctor Who, the length of that scarf was the result of a miscommunication.

"Look at the time! We'd better get inside."

Well, well, well. Looks like Rarity taught him a little something about generosity.

"Now you get in there and marry that donkey!"

"All set, Mayor!"
Add a photo to this gallery

Mayor, why are you ADDING to Cranky's anxiety?

Aw, Shining Armor's such a sweetheart! ^_^

Aw, sibling reconciliation at its finest! ^_^

Is it a monster? An alien? A maniac?

A changeling. Where did it come from? It's been 2 1/2 seasons ago since we last saw them.

It's really saying something when the most effeminate character holds the most masculine character.

And the crowd goes wild!

"They need love to ignite!"

The Doctor and Rose together again!

"You know something, girls?"

"We are so lucky to live in this town!"

"That's where the bugbear bit me!"

Well, that certainly was a Slice of Life in Ponyville.
Add a photo to this gallery 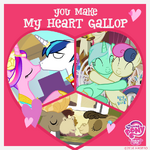 Clockwise from bottom: A Friend in Deed; A Canterlot Wedding - Part 2; Slice of Life
Add a photo to this gallery
Retrieved from "https://mlp.fandom.com/wiki/Slice_of_Life/Gallery?oldid=2020983"
Community content is available under CC-BY-SA unless otherwise noted.