Sludge is a male dragon who appears as the antagonist of the season eight episode Father Knows Beast, pretending to be Spike's father. He is named Shale in some merchandise.

Sludge partly resembles "Clump" and to a lesser extent Backdraft.

Sludge shares his name with the G1 character Sludge in My Little Pony's The Quest of the Princess Ponies.

Regarding the name "Shale", Nicole Dubuc stated on Twitter in October 2018, "Sludge had A LOT of names before we got one to clear legal."[1]

In Father Knows Beast, Sludge first appears falling out of the sky like a fireball and crash-landing in Ponyville near Spike and Smolder. Sludge suffers a broken arm and sprained wings as a result of his crash, so Spike takes him to the Castle of Friendship to recover. The Mane Six offer to let him stay until he gets back on his feet. Sludge is resistant to accept help from ponies at first, but he accepts, and they nurse him back to health.

Before departing from Ponyville, Sludge remarks how happy he is that Spike found such great friends and a home, and he reveals that he is Spike's father. He tells a story of how Spike was orphaned as an egg, and the two proceed to engage in several father/son activities together. When Sludge later comments how little like a dragon Spike is due to growing up among ponies, he—at Twilight Sparkle's suggestion—decides to show Spike how to be a real dragon. By the end, Sludge effectively takes over Spike's bedroom and gets Spike to do everything for him.

When Spike—at Smolder's suggestion—wants to move himself and Sludge to an uncomfortable cave so they can live like real dragons, a panicked Sludge confesses that he is not Spike's father and only pretended to be in order to live a life of castle luxury. Arguing that he simply did what any other dragon would have done in the same situation, Sludge takes his leave of Ponyville.

Sludge is a character in Gameloft's mobile game. His bio states: "Spoiler alert: He's not actually Spike's dad, and not actually that great at being a dragon. Mostly he just wishes he lived in a castle."

Sludge, named Shale, is featured in the My Little Pony Character Guide published by Orchard Books in the United Kingdom on September 6, 2018.

Similar to Garble, Sludge is first introduced as being dismissive of ponies, pony-related things, and even fellow dragons who are much younger than him, including Spike and Smolder. He refuses the help of Twilight Sparkle and her friends at first, and during his rehabilitation under their care, he is mostly lazy and gluttonous. After adopting the persona of Spike's father, Sludge pretends to be kind, patient, and considerate. However, he largely maintains the image of a freeloader, lazing about the Castle of Friendship and convincing Spike to do things for him while under the guise of being a loving parent.

He is deeply self-centered and uncaring, remorselessly tricking Spike into living outside like a "real dragon" while he takes Spike's room for himself.

He seems to genuinely believe his acts of deceit and manipulation are what any dragon would do in his situation, even when Smolder insists that they really are not.

"Hey there, young dragons. [coughs] Name's Sludge. How are your tails shakin'?"
— To Spike and Smolder, Father Knows Beast

"I don't need to explain myself to a couple of baby dragons."
— Father Knows Beast

"Dragons take care of themselves. I don't need help from a bunch of castle-livin' ponies."
— Father Knows Beast

"Spike, my boy, with you by my side, I feel like we could do anything."
— Father Knows Beast

"I saw an opportunity, and I took it. That's what dragons do."
— Father Knows Beast 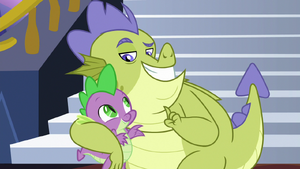 Retrieved from "https://mlp.fandom.com/wiki/Sludge?oldid=2149221"
Community content is available under CC-BY-SA unless otherwise noted.