A family of raccoons consisting of at least patriarch Smoky, matriarch Softpad, and child Smoky Jr. appears in the series and the My Little Pony Equestria Girls franchise. They first appear in the season six episode The Saddle Row Review.

Smoky, Softpad, and Smoky Jr. first appear in the season six episode The Saddle Row Review as raccoons occupying the Manehattan building where Rarity plans to open her third boutique, Rarity For You. Rarity initially wants to get rid of the raccoons, and Fluttershy tries to get them to vacate, but they refuse. Later, Fluttershy asks them to work during the boutique's opening night celebration as cocktail waiters. In Every Little Thing She Does, Smoky and Softpad appear among the animals that Starlight Glimmer agreed to help with Fluttershy as part of her friendship lessons.

In season seven, Smoky, Softpad, and Smoky Jr. make various appearances in Fluttershy Leans In, causing chaos around Dr. Fauna's veterinary clinic and destroying the original version of Sweet Feather Sanctuary. They later appear frolicking at the finalized version of the sanctuary.

In season eight, Smoky, Softpad, and Smoky Jr. appear in Fake It 'Til You Make It still residing at Rarity For You. They help Fluttershy run the boutique during the absence of Rarity's hired salesponies, but when Fluttershy adopts a series of personas to deal with the boutique's customers, she derogatorily calls them "rodents", to the surprise of them and the rest of Fluttershy's friends. After Fluttershy drops her character personalities, she apologizes to the raccoons, and they make amends. In Yakity-Sax, Smoky and Smoky Jr. appear sleeping in Fluttershy's animal nursery before Pinkie Pie's terrible yovidaphone playing wakes them up.

In My Little Pony Best Gift Ever, Smoky appears chasing BGE Unnamed Earth Stallion #2 through Ponyville during One More Day. In Teacher of the Month, Smoky appears at a student appreciation party at the School of Friendship.

In She Talks to Angel, Smoky and his family appear at Fluttershy's animal sanctuary throughout the episode, including during the predator/prey support group on the predators' side. In The Big Mac Question, Smoky and his family appear getting tucked in by Fluttershy at her sanctuary before Apple Bloom accidentally wakes them up while looking for Big McIntosh.

In A-Dressing Memories, Smoky and his family are mentioned by Rarity as she tries to cover-up Spike and Starlight's presence at the Carousel Boutique from Twilight after the latter accidentally knocks over Rarity's fabrics. They also appear in a flashback clip of The Saddle Row Review. They get mentioned again by Twilight after Spike closes the picture book on his claw, with the former still believing Rarity's alibi.

In the Summertime Short Get the Show on the Road, Twilight Sparkle discovers Smoky, Softpad, and Smoky Jr. living inside the broken-down bus that the Rainbooms fix up to use as their tour bus. They attack Twilight at first, but they later help fix up the bus.

Equestria Girls: Choose Your Own Ending

In the Fluttershy ending of the Choose Your Own Ending short Stressed in Show, Smoky, Softpad, Smoky Jr., and a fourth raccoon with an appearance similar to Smoky Jr. appear in response to Fluttershy's animal summons. In the second season, Smoky's family appear in the Fluttershy ending of Tip Toppings in which they drink large quantities of frozen yogurt out of a dispenser after stampeding inside a frozen yogurt store with several other animals. Smoky later appears with some of the other animals outside the store after it closes.

In the "Blizzard or Bust" segment of Holidays Unwrapped, Smoky appears antagonizing Pinkie Pie over a bag of potatoes until Fluttershy forces them to make peace.

In the August 9, 2018 My Little Pony Annual 2019, published by Orchard Books in the United Kingdom, Smoky, Softpad, and Smoky Jr. are featured in the print adaptation of Fake It 'Til You Make It.

Smoky, Softpad, and Smoky Jr. have been featured as background characters in Gameloft's mobile game[1][2], but were later added as playable characters. Smoky acts as a boss while Softpad and Smoky Jr. act as a enemy minions during the "Fake It 'Til You Make It" boss battle event.

Smoky:
He moved into 'Rarity for You' more or less by circumstance--but his new career as a shop-raccoon really suits him!
Smoky Jr.:
Living proof that even the youngest of raccoons are enthusiastic about the Manehattan Fashion Industry.
Softpad:
She thinks Rarity For You is a wonderful for an enterprising raccoon family to live. Certainly better than the crawlspace UNDER Rarity For You!

In the Defenders of Equestria expansion set of Enterplay's collectible card game, Smoky, Softpad, and Smoky Jr. are featured on card #85 U, "Rarity & Fluttershy, Critter Recruiters". 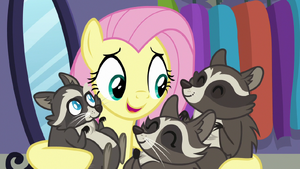