For the animals, see Animals#Snail.
For this character's human counterpart, see Snips and Snails (EG).

Snails is a male school-age unicorn pony who resides in Ponyville and is often seen with his friend Snips. He is called Snailsquirm in some merchandise.

Snails is a golden colored colt with an aquamarine mane and tail and light yellow freckles, resembling Generation 1 baby pony Squirmy. He is notably lankier and thinner than other ponies, much like Celestia or Luna, Fancy Pants' companion Fleur Dis Lee or Mrs. Cake's husband, Mr. Carrot Cake. His irises are usually not visible outside of My Little Pony: Pony Life,[1] similarly to those of Snips, but they are sometimes visible in the IDW comics, varying between dark brown on My Little Pony: Friendship is Magic Issue #30's story page 14 and dark blue on Issue #39's Hot Topic RE cover.

Snails has a goofy manner of speech which, in contrast to Snips' higher voice, is quite low and slow. This tone and his use of the word "eh" is reminiscent of a stereotypical Canadian accent.

Both Snails, as well as his best friend Snips, are named after the traditional nursery rhyme What Are Little Boys Made Of?. A version of the verse goes:

According to Lauren Faust, originally Snips and Snails' sizes were reversed; Snips was the bigger one and Snails was the smaller one.

Snails first appears in Boast Busters, where his friend Snips sweeps Spike up over his horn when they both run to see Trixie. After Trixie's show, both he and Snips adoringly pester her to tell them the story of how she defeated the ursa major, but she declines. Following a conversation with Spike about the subject, they venture into the Everfree Forest to bring an ursa major to Ponyville to watch Trixie defeat it.

"Why is it that they call it a flea market when they don't really sell fleas?"
— Snails talking to Snips

When they're in the forest, Snails uses his horn to illuminate their surroundings, although this takes some effort on his part and sounds like a generator sputtering. The light bothers the ursa, who begins chasing the ponies back into Ponyville. Later, Snips and Snails are shocked to find that Trixie made up her previous claims, and greatly embarrassed when Twilight Sparkle points out that it was their fault for bringing the minor, which they mistook for a major, into town, and that it was only cranky for having its sleep disturbed. They humbly accept their punishment for unleashing it.

Snails has a non-speaking cameo in Call of the Cutie, attending the cute-ceañera where he takes the first bite of cake, much to Diamond Tiara's annoyance.

In the episode, The Show Stoppers, he and Snips perform a magic trick for the talent show which Snails ruins by eating the carrots that Snips was about to reveal. When they win their 'Best Magic Act' medallion, Snips comments that his medallion is shinier. A clearly annoyed Snails replies his is bigger. Snips continues by saying his is heavier.

Snails has another non-speaking cameo during a field trip in The Return of Harmony Part 1. Remaining in the background, he doesn't seem too happy to be attending this field trip.

In The Cutie Pox, Snips and Snails marvel at Apple Bloom's hooping skills along with the rest of the school foals and try learning from her how to do it themselves. When she suddenly gets a second cutie mark, this time for spinning plates, they challenge her to demonstrate it, which she does.

In The Mysterious Mare Do Well, he is seen at the beginning of the episode in the Cutie Mark Crusaders' clubhouse as a member of The Official Rainbow Dash Fan Club, and is later seen throughout the episode with Snips.

He briefly appears entering the schoolhouse at the beginning of Hearts and Hooves Day.

In Ponyville Confidential, he and Snips are first seen complimenting Featherweight on his cutie mark. Later, Sweetie Belle discovers them together, fighting over how to get gum out of their coats. Snails kicks Snips to see if the gum will get off, but Snips whiplashes back, causing the gum to bind them tighter together. Snails begins to scream hysterically for the gum to be removed. Sweetie Belle asks Featherweight to take their picture, and the Cutie Mark Crusaders use them as their first story. The two take it in stride, happy to be featured in the paper and have the gum removed with patches of their coats removed in the process. When the Cutie Mark Crusaders look for another story, Snips and Snails get themselves stuck in gum again, but the Crusaders decide not to write the same story twice.

In the episode Magic Duel, he and Snips appear once again with Trixie. This time, Trixie becomes angry with their antics and fuses their horns together. She later separates them, but uses them as targets for her age magic, making Snails an old pony, and Snips a baby. When Snails becomes older, his cutie mark changes to an elderly-looking snail. Later in the episode, Trixie uses them to pull her wheel-less carriage, which she eventually converts into a massive golden bed. Snails comments that Trixie is "getting weirder and weirder!" Trixie uses them for her age magic again near the end of the episode, this time changing them both into babies.

Snails appears in Flight to the Finish along with Snips. When Ms. Harshwhinny informs Cheerilee's class of the flag-carrying auditions for the Equestria Games, Snips and Snails entertain the idea of auditioning, to the ridicule of their classmates.

They also appear in Twilight Time, in It Ain't Easy Being Breezies, in For Whom the Sweetie Belle Toils, and out of focus in Equestria Games. Snails appears in Twilight's Kingdom - Part 2 visible without his friend for the second time checking out the newly formed Castle of Friendship.

Snails appears in Slice of Life with other ponies observing the Mane Six in Ponyville.

In Crusaders of the Lost Mark, he appears during the presidential debate at the schoolhouse, during Diamond Tiara's confrontation with her mother, and as the Crusaders earn their cutie marks.

Snails also appears in Scare Master dressed as Skeletor in the background as the Cutie Mark Crusaders TP a tree near Carousel Boutique.

Snails, along with the rest of the school ponies, meets Coloratura in The Mane Attraction. He also appears in The Cutie Re-Mark - Part 2 during Friends Are Always There For You.

In Flutter Brutter, Snails is depicted in a photograph in Pinkie Pie's wallet. In The Cart Before the Ponies, Snails has a speaking role during Cheerilee's physics lecture, feeling relieved that he doesn't have to learn anything that day.

In Buckball Season, Snails demonstrates a hidden talent for the sport of buckball and joins Fluttershy and Pinkie Pie on Ponyville's team against Appleloosa.

In Celestial Advice, Fame and Misfortune, and A Health of Information, Snails appears in the group photo from the show's opening on Twilight's mirror.

In The Break Up Break Down, Snails is one of the possible candidates that the Cutie Mark Crusaders consider for Sweetie Belle's secret admirer, which Sweetie Belle hopes is not the case. In Marks for Effort, he is one of the students who run out of the Schoolhouse after their lesson is finished. In The Washouts, he is seen with the rest of the Rainbow Dash fan club, and later becomes part of the Scootaloo fan club.

Snails appears in Common Ground playing for the Ponyville Team. Snails keeps signing autographs for ponies when Snips decides to use him as a get-rich-quick plot. In She's All Yak, he appears in the reused image of The Cutie Re-Mark - Part 2 during Fit Right In. In The Last Crusade, Snails appears during class and during CMC Appreciation Day. In 2, 4, 6, Greaaat, Snails and the Ponyville team coach the School of Friendship Buckball team for their upcoming match against Celestia's School for Gifted Unicorns. Snails also briefly attempts to coach the cheer squad.

In The Ending of the End - Part 2, Snails takes shelter with Snips and other unicorns inside the School for Gifted Unicorns as Canterlot closes itself off from the other pony races. He also appears when Raspberry Dazzle rallies the unicorns for the battle. In The Last Problem, Snails briefly appears in Rainbow Dash's group shot during The Magic of Friendship Grows.

Snails appears on the bleachers in Rainbow Dash's memory of Newbie Dash in Deep Tissue Memories.

Snails appears in a photograph in episode 10 of Baby Flurry Heart's Heartfelt Scrapbook, "The Magic of Friendship". He also appears as one of Princess Celestia's School for Gifted Unicorns students in the first, second, third, fourth, and fifth episodes of Fundamentals of Magic.

By chapter 6 of Rainbow Dash and the Daring Do Double Dare, "Heating Up", Snips and Snails had dared Rainbow Dash to swim to the bottom of Froggy Bottom Bogg. Snips and Snails also appear in the Ponyville Mysteries books Schoolhouse of Secrets and The Tail of the Timberwolf, teasing Sweetie Belle for being a "scaredy-pony" in the latter.

Snails is a school-age colt unicorn residing in Ponyville who is often seen with his friends Snips.

SNIPS and SNAILS are pony pals with a bit of a naughty streak. Impish Snails[sic] is balanced out by happy-go-lucky Snails. Together, they're quite a pair!

From Princess Twilight Sparkle - Part 1 to School Daze - Part 2, he was added to the intro near the end group shot.

A Snailsquirm miniature collectible is included in the Ponyville Newsmaker Set with Snipsy Snap and rainbowfied Pinkie Pie.[2] A second Snailsquirm mini-figure toy[3] is included with a collector card as part of the tenth wave of mystery packs, which has been displayed at the 2014 American International Toy Fair.[4] According to the collector card, Snailsquirm "is the fun-loving best friend of SNIPSY SNAP!"[5] Snails appears on the Comic Con 2011 and Season 2 posters.

"Why is it they call it a flea market when they don't really sell fleas?"
— Boast Busters

"I second the motion, and might I add that if you looked up the word 'awesome' in the dictionary, there would be a picture of Rainbow Dash."
— The Mysterious Mare Do Well

"Oh, phew! For a second, I thought we were gonna have to, you know, learn stuff."
— The Cart Before the Ponies

"You could do what I do and not think about it. Seriously. I don't think about anything. Ever."
— Buckball Season

"I think so, Snips, but burlap chafes me so..."
— Enterplay collectible card game Canterlot Nights #49 C card of Snails

"Miss Cheerilee said that if things get tough we should 'stick to it!'"
— Enterplay collectible card game Canterlot Nights #51 R card of Snips & Snails 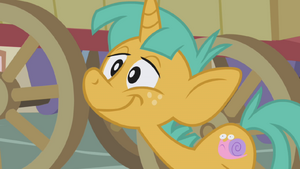