Snap Shutter and Mane Allgood are an Earth pony/Pegasus duo of world travelers/adventurers and the married parents of Scootaloo. They are first mentioned in the chapter book Ponyville Mysteries: Riddle of the Rusty Horseshoe, and they make their physical debut in the season nine episode The Last Crusade.

On the topic of Scootaloo's family, series creator Lauren Faust "did not have specific plans for what her family deal was"[1] and confirmed at Equestria LA 2015 that she does have parents, but the topic of it was never brought up.[2] Faust later clarified over Twitter that, according to her vision for the show, Scootaloo indeed has parents, but they both have demanding jobs and that Scootaloo is good at evading her babysitter.[3]

In the season nine episode The Last Crusade, Scootaloo, upon receiving word that they are finally returning to Ponyville talks up her parents to her classmates at the Ponyville Schoolhouse, explaining they are world-traveling adventurers who study exotic plants and creatures for the advancement of science and medicine. Because of this, they are rarely at home and often leave Scootaloo in the care of her aunts Holiday and Lofty. Snap Shutter and Mane Allgood make their official entrance wrangling a cragadile into its cage after it briefly rampages through the classroom.

Over ice cream sundaes, Snap and Mane reveal to Scootaloo that they have taken a new job assignment in Shire Lanka that would allow all three of them to live together. However, this arrangement would force Scootaloo to leave Ponyville. The Cutie Mark Crusaders try several attempts to get Snap and Mane to stay in Ponyville, but their attempts all end in failure. Despite Snap and Mane's assurance to Scootaloo that this would be a good change for them, Scootaloo criticizes her parents for forcing such a change on her without considering how she feels about it.

After consulting Holiday and Lofty at their home near Ponyville, the Crusaders turn to their friends for help, and a "Cutie Mark Crusader Appreciation Day" is thrown outside Ponyville Town Hall, attended by all the ponies and creatures that the Crusaders have helped. Upon hearing all the attendees speak out on the Crusaders' behalf, Snap and Mane realize that Scootaloo has a special purpose that only she can do, similar to their own jobs as adventurers. As a result, they allow Scootaloo to stay in Ponyville and promise to visit her more often.

In My Little Pony: Friendship is Magic Issue #93, part of the comics' ongoing "Season 10", Snap Shutter and Mane Allgood return to Ponyville for a visit with Scootaloo, but their profession of observing wild and dangerous animals bores or scares her. When she admits this to them, they are understanding and offer to engage in activities that Scootaloo is interested in, like water-skiing.

Scootaloo's parents are indirectly mentioned in the chapter book Ponyville Mysteries: Riddle of the Rusty Horseshoe. It is revealed in narration that Holiday is the older sister of Scootaloo's father and that she and Lofty look after Scootaloo while her parents are away "most of the time".

Snap Shutter and Mane Allgood are characters in Gameloft's mobile game, and serve as a boss and boss battle helper in "The Pinkie Parents Problem" event. Mane Allgood's bio states, "Scootaloo's mom studies strange flora and fierce fauna from all over the world! And yes, that DOES include wing-wrestling wyverns sometimes."

Snap Shutter: Easy there, Marshmallow! Time you were in your crate for your nap!
Mane Allgood: And that means now, mister!

Snap Shutter: Sorry to make such an entrance. Just brought back a few mates from our last adventure.
Mane Allgood: We couldn't wait another moment to see Scootaloo!

Snap Shutter: Crikey! You're nearly as tall as me now, Scoot!

Snap Shutter: We never planned to be away for so long in the first place. We just kept discovering things that could help Equestria. And nopony else had the experience to finish our job.
Mane Allgood: But with all that's happened lately – Sombra's return, the destruction of the Tree of Harmony – we decided our family should be together.

Snap Shutter: Turns out you're just like us, Scoot. You have an important job that only you can do. You love it, and it helps all of Equestria.
Mane Allgood: Sometimes that means missing out on other things you love, like watching our daughter grow into a pony we're very proud of. 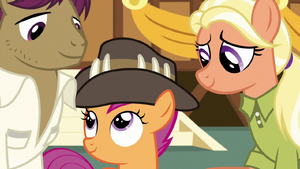 Retrieved from "https://mlp.fandom.com/wiki/Snap_Shutter_and_Mane_Allgood?oldid=2189772"
Community content is available under CC-BY-SA unless otherwise noted.