For this character's human counterpart, see Snips and Snails (EG).

Snips is a male school-age unicorn pony from Ponyville who is usually seen in the company of his friend Snails. He is called Snipsy Snap in some merchandise.

Snips is an excitable and goofy pony, often entering a fit of eager jumping at the slightest inclination. He is an unusually short and round pony, much like Truffle, and is possibly the smallest unicorn in all of Ponyville,[3][4] other than babies such as Pumpkin Cake. He is characterized by his small eyes, buck teeth, high and scratchy voice, short light brown mane and tail, and large brown eyebrows. These features grant him a unique appearance in comparison to the other residents of Ponyville. His irises are usually not visible outside of My Little Pony: Pony Life,[1] similarly to those of Snails, but they are sometimes visible in the IDW comics, varying between brown on My Little Pony: Friendship is Magic Issue #8's story page 12 and dark blue on Issue #39's Hot Topic RE cover.

His cutie mark, a pair of scissors, is explained by him in the IDW comics' My Little Pony: Friendship is Magic Issue #10 story Zen and the Art of Gazebo Repair - Part Deux "If You Only Have a Hammer, You See Every Problem as a Nail" as meaning that he is "excellent at cutting all things".

Both Snips, as well as partner-in-crime Snails, are named after the traditional nursery rhyme What Are Little Boys Made Of. A version of the verse goes:

What are little boys made of?
Snips and snails and puppy dogs' tails.
That's what little boys are made of.

According to Lauren Faust, originally Snips and Snails' sizes were reversed; Snips was the bigger one and Snails was the smaller one. According to Jim Miller on July 13, 2015, Claude and Snips aren't father and son.[5]

Snips makes his debut in Boast Busters, where he and Snails sweep Spike up over their horns when he and Snails run to see Trixie. After Trixie's show, both he and Snails adoringly pester her to tell them the story of how she defeated the ursa major, but she declines. When Spike later asks about her, Snips refers to her as "G an' P T" which he explains means "Great and Powerful Trixie." In response to Spike's skepticism about the ursa major encounter, Snips and Snails venture into the Everfree Forest to attempt to bring one to Ponyville to watch Trixie defeat it. Snips and Snails are shocked to discover Trixie made up her boastful claims, and slightly embarrassed when Twilight Sparkle points out they woke up the baby ursa minor and made it cranky, endangering all of Ponyville. They humbly accept their punishment for bringing the ursa into town. Twilight tells them that they can clean up the mess the ursa caused, but they also receive mustaches from Twilight's magic.

In The Show Stoppers, Snips and Snails attempt to perform a magic act for the talent show. Snails ruins the act by eating the prop carrots, causing Snips to give chase. The two win medals for "best magic act", with Snips getting the "shinier" and "heavier" medal.

Snips and Snails are part of the group of foals on the field trip at the beginning of The Return of Harmony Part 1, along with the Cutie Mark Crusaders, Silver Spoon, Diamond Tiara, and Twist.

In The Cutie Pox, they marvel at Apple Bloom's hooping skills along with the rest of the school foals and try learning from her how to do it themselves. Snips blushes when Apple Bloom helps him with his hoop. When she suddenly gets a second cutie mark, this time for spinning plates, he and Snails challenge her to demonstrate it which she does much to their surprise.

In The Mysterious Mare Do Well, Snips attends a meeting of the Official Rainbow Dash fan club, where he and Scootaloo debate over which word would best describe Rainbow Dash. He briefly appears entering the schoolhouse at the beginning of Hearts and Hooves Day.

In Ponyville Confidential, he and Snails compliment Featherweight on his cutie mark. Later, Sweetie Belle discovers them together, fighting over how to get gum out of their hair. Snails kicks Snips to see if the gum will get off, but Snips whiplashes back, causing the gum to bind them tighter together. Sweetie Belle asks Featherweight to get their picture, and the Cutie Mark Crusaders use them as their first story. The two take it in stride, happy to be featured in the paper and have the gum removed with patches of their hair removed in the process. When the Cutie Mark Crusaders look for another story, Snips and Snails get themselves stuck in gum again, but the Crusaders decide not to cover the same story twice.

In the episode Magic Duel, he and Snails appear once again with Trixie. This time, Trixie becomes angry with their antics, and fuses their horns together. She later separates them, but uses them as targets for her age magic, making Snails an old pony, and Snips a baby. Later in the episode, Trixie uses them to pull her wheel-less carriage, which she eventually converts into a massive golden bed. Snips comments that he misses "the days when she was just a fraud!" Trixie uses them for her age magic again near the end of the episode, this time changing them both into babies.

Snips appears in Flight to the Finish along with Snails. When Ms. Harshwhinny informs Cheerilee's class of the flag-carrying auditions for the Equestria Games, Snips and Snails entertain the idea of auditioning, to the ridicule of their classmates.

Snips also briefly appears, alongside Snails, in Twilight Time, in It Ain't Easy Being Breezies, in For Whom the Sweetie Belle Toils, and out of focus in Equestria Games.

Snips appears in Slice of Life with other ponies observing the Mane Six in Ponyville.

In Crusaders of the Lost Mark, he appears during the presidential debate at the schoolhouse, during Diamond Tiara's confrontation with her mother, and as the Crusaders earn their cutie marks.

Snips also appears in Scare Master dressed as He-Man in the background as the Cutie Mark Crusaders TP a tree near Carousel Boutique.

Snips, along with the rest of the school ponies, meets Coloratura in The Mane Attraction. He also appears in The Cutie Re-Mark - Part 2 during Friends Are Always There For You.

In The Cart Before the Ponies, Snips has a brief speaking role during Cheerilee's lesson and participates in the Applewood Derby with an unnamed unicorn stallion.

In Celestial Advice, Fame and Misfortune, and A Health of Information, Snips appears in the group photo from the show's opening on Twilight's mirror.

In The Break Up Break Down, Snips is one of the possible candidates that the Cutie Mark Crusaders consider for Sweetie Belle's secret admirer, which Sweetie Belle hopes is not the case. In Marks for Effort, Snips runs out of the Schoolhouse alongside most of his classmates when the school bell dings. Later, while all of Cheerilee's students clean her classroom, Snips sweeps the classroom floor. In The Washouts, he is seen with the rest of the Rainbow Dash fan club, and later becomes part of the Scootaloo fan club.

Snips appears in Common Ground, where he comes up with a get-rich-quick plot to get money for Snails' autographs. He also helps Rainbow Dash out in training Quibble Pants and playing the half-time buckball show. In She's All Yak, he appears in the reused image of The Cutie Re-Mark - Part 2 during Fit Right In. In The Last Crusade, he is seen in Cheerilee's class, and is openly skeptical when Scootaloo reveals that her parents are explorers (only to be proven wrong when they restrain a Cragadile in front of the class). In 2, 4, 6, Greaaat, Snips helps with the cheerleading squad for the School of Friendship's Buckball team (mostly so he can sell Buckball merchandise in Ponyville).

In The Ending of the End - Part 2, Snips takes shelter with Snails and other unicorns inside the School for Gifted Unicorns as Canterlot closes itself off from the other pony races. He also appears when Raspberry Dazzle rallies the unicorns for the battle. In The Last Problem, Snips briefly appears in Rainbow Dash's group shot during The Magic of Friendship Grows.

Snips appears on the bleachers in Rainbow Dash's memory of Newbie Dash in Deep Tissue Memories.

Snips appears as one of Princess Celestia's School for Gifted Unicorns students in the first, second, third, fourth, and fifth episodes of Fundamentals of Magic.

By chapter 6 of Rainbow Dash and the Daring Do Double Dare, "Heating Up", Snips and Snails had dared Rainbow Dash to swim to the bottom of Froggy Bottom Bogg. Snips and Snails also appear in the Ponyville Mysteries books Schoolhouse of Secrets and The Tail of the Timberwolf, teasing Sweetie Belle for being a "scaredy-pony" in the latter.

In the story arc Zen and the Art of Gazebo Repair, Snips appears on My Little Pony: Friendship is Magic Issue #9 page 8 watching Trixie's puppet show and Issue #10 pages 4-5 demonstrating his talent for cutting things. In the Issue #38-39 story arc Don't You Forget About Us, he gets lost with the Cutie Mark Crusaders, Snails, Diamond Tiara, and Silver Spoon during a class field trip.

In My Little Pony: Ponyville Mysteries Issue #2, Snips steals pins from the Ponyville bowling alley in an effort to protect his grandfather Kingpin's bowling record.

An excitable and mischievous pony, Snips can often be found with his pal Snails.

SNIPS and SNAILS are pony pals with a bit of a naughty streak. Impish Snails[sic] is balanced out by happy-go-lucky Snails. Together, they're quite a pair!

From Princess Twilight Sparkle - Part 1 to School Daze - Part 2, he was added to the intro near the end group shot.

A Snipsy Snap miniature collectible is included in the Ponyville Newsmaker Set with Snailsquirm and rainbowfied Pinkie Pie.[6] A second Snipsy Snap mini-figure toy[7] is included with a collector card as part of the tenth wave of mystery packs, which has been displayed at the 2014 American International Toy Fair.[8] According to the collector card, Snipsy Snap "plays games with SNAILSQUIRM all the time!"[9] Snips appears on the Comic Con 2011 and Season 2posters.

"The Great and Powerful Trixie vanquished an ursa major. Can your Twilight claim that?"
— To Spike, Boast Busters

"Oh, how are we gonna find an ursa major when I can't even see my own hoof in front of my face?"
— Boast Busters

"...And on the count of three, this rabbit will disappear, and something tasty will reappear in its place."
— The Show Stoppers

"I object! I think the word 'awesome' is played out! Rainbow Dash deserves better! I motion that we declare her the most stupendous pony!"
— The Mysterious Mare Do Well

"I miss the days when she was just a fraud!"
— Regarding Trixie, Magic Duel

"Hey, it could happen!"
— Flight to the Finish

"Aww... I knew there was gonna be a catch!"
— The Cart Before the Ponies 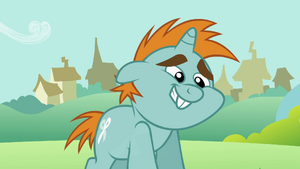