For these characters' pony counterparts, see Snips and Snails.

Snips and Snails' human counterparts appear in the My Little Pony Equestria Girls franchise. They are students at Canterlot High School and minor antagonists alongside Sunset Shimmer in the first film.

In My Little Pony Equestria Girls, Snips and Snails appear as students of Canterlot High School. In contrast to their pony counterparts' benevolence, they serve as minor antagonists and Sunset Shimmer's bumbling lackeys throughout the film.

At Sunset Shimmer's behest, they record Twilight Sparkle's clumsy attempts at getting accustomed to the human world, and they upload their recordings to the school website, turning her into a laughing stock. They later destroy the decorations for the Fall Formal, and Sunset Shimmer uses doctored photos to frame Twilight for it.

During the Fall Formal, Snips and Snails abduct Spike, causing Twilight and her new friends to chase them into the schoolyard. When Sunset Shimmer puts on Twilight's crown and transforms into a demonic creature, she turns Snips and Snails into similar creatures as well. In this form, they menace Twilight's friends. After their defeat, they, along with Sunset Shimmer, are forced to repair the damage to the school they caused.

In My Little Pony Equestria Girls: Rainbow Rocks, Snips and Snails, along with the Cutie Mark Crusaders and other Canterlot High students, are hypnotized by the Dazzlings into turning the CHS Musical Showcase into a Battle of the Bands. They also frequently argue with their fellow students, including Photo Finish, Flash Sentry, and Trixie Lulamoon.

In the Battle of the Bands, Snips and Snails participate as rappers under the respective stage names "MC Snips" and "DJ Snazzy Snails". During the Rainbooms' performance of Shake Your Tail, Snips and Snails take advantage of Fluttershy's stage fright by shining a spotlight on her. The two are defeated in the first round of the tournament by Bulk Biceps, shown during the Dazzlings' song Under Our Spell.

In Perfect Day for Fun, Snips and Snails appear riding a ferris wheel at the Canterlot High carnival. Snips later appears walking towards the stage as the Rainbooms' run backstage to perform.

In My Little Pony Equestria Girls: Friendship Games, Snips and Snails make brief cameo appearances during the welcoming party for Crystal Prep Academy in the Canterlot High gym and in several photographs during the film's closing credits. In one such photograph, they play a prank on Lyra Heartstrings and Sweetie Drops in the school library.

In Legend of Everfree, Snips and Snails appear among the class of Canterlot High students visiting Camp Everfree. During the campfire scene, Snips asks camp director Gloriosa Daisy for a toothbrush, and the frightened Snails asks a flashlight. In addition to several background appearances throughout the film, Snips and Snails briefly appear mischievously making water balloons.

In A Fine Line, Snips and Snails appear waiting in line together for the Tirek's Revenge video game. In Queen of Clubs, they appear as members of the Canterlot High RPG and hip-hop clubs. They also appear on a CHS staircase in Overpowered and on the beach in Blue Crushed.

In the second season short Schedule Swap, Snips appears in a wood shop class hammering nails into a poorly-built table with a wrench. He later appears sitting in the school cafeteria. In Run to Break Free, Snails throws a paper airplane to Snips in the school hallway, causing him to crash into Trixie as he tries to catch it. In Five Lines You Need to Stand In, Snails appears alone in a security line, a food truck line, and a photo booth line at the Starswirled Music Festival. They appear together in the washroom line, which Pinkie Pie turns into a conga line. In Find the Magic, they appear attending the Dazzlings' performance.

In the Rainbow Dash ending of Best Trends Forever, Snips and Snails participate in the new rainbow wig trend. In Text Support, they appear covered in frosting after a lab experiment with Pinkie Pie. They appear in charge of the school play's props in Rarity Investigates: The Case of the Bedazzled Boot, and as stagehands for the play in All the World's Off Stage and Opening Night. In all three endings of Happily Ever After Party, they appear attending the school play after-party.

In the second season, Snails makes a cameo appearance in the Pinkie Pie ending of Wake-Up!. Snips and Snails appear standing in front of a smoothie truck in Lost and Pound. Snips is a possible ending in Accountibilibuddies, in which he is selected by Applejack to accompany her to the Dirk Thistleweed performance and explains being inexplicably abandoned by Snails at the Starswirled Music Festival. Snails later shows up having not abandoned him alongside Dirk Thistleweed, who gives Applejack, Snips, and Snails stage-side seats to his concert. In The Road Less Scheduled, Snips makes a cameo appearance dancing with Derpy and Bulk Biceps at the festival.

In the hour-long special Forgotten Friendship, Snips and Snails appear in yearbook photos with Maud Pie and Sunset Shimmer, follow Trixie around at the beach, and briefly hang out with Zephyr Breeze.

In "Sunset's Backstage Pass", Snips and Snails make various background appearances on the first day of the Starswirled Music Festival and various time loops of that day, appearing at the festival security line, in front of the tandem bicycle giveaway, and ordering snow cones from a festival food truck.

In the 16th time loop, Snips himself, after getting a snow cone, trips and falls just as Sunset predicts it, causing Snips to wonder if Sunset is a witch. In later time loops, they attempt to get past a security guard to get an autograph from The Dazzlings, but the guard refuses, and they run away crying. In the final time loop, they appear attending PostCrush's concert with Sunset Shimmer and Pinkie Pie.

In the short "Saving Pinkie's Pie", Snails takes part in a big snowball fight, during which he loses a boot. In "Dashing Through the Mall" the two get each other the exact same gift: a plastic hand for giving high fives. In "O Come, All Ye Squashful", Snips and Snails witness Rainbow Dash trip and fall while running in her cornucopia costume.

In the My Little Pony: Equestria Girls Holiday Special comic, Snips and Snails appear on page 28.

In the Equestria Girls screenplay novelization Through the Mirror, Rarity refers to Snips and Snails as freshmen and mentions that, when Rarity ran for Princess of the Spring Fling, they followed her to Carousel Boutique after school and filmed her pretending a mannequin was a prince.

Snips: You got it, Sunset Shimmer.

Snips: This is gonna be so cool!

Snails: Aw, yeah! Snips and Snails indahouse, yo!
Snips: [rapping] They call me MC Snips and that ain't no lie. My favorite food is like pumpkin pie.
Snails: [rapping] I'm DJ Snazzy Snails, I like whales. When I go to the beach, I always bring my pails.

Snips: [rapping] Everybody knows my favorite color is orange. My rhymes are so fly, they're better than... um...
Snails: Than an orange, yo!
Snips: Yeah!

Snips: In your face, Rainbooms!

My Little Pony: Equestria Girls: Through the Mirror

Snips: Sunset Shimmer is going to love this! 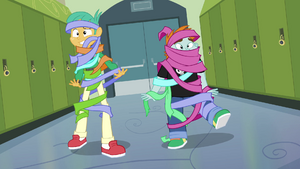