For the pony misidentified as Soarin in the seventh wave of mystery pack collector cards, see Spitfire.

Soarin,[8] or Soarin', is a male Pegasus pony and a member of the Wonderbolts. He appears in multiple episodes of the series, making his debut in The Ticket Master, in Rainbow Dash's fantasy. Soarin makes his speaking debut in The Best Night Ever, which is also where his name is mentioned by Spitfire, the captain of the Wonderbolts. He also appears to have a huge love for apple pie, as seen in The Best Night Ever. The shoulder boards on his shirt in A Canterlot Wedding - Part 2 signify he is a commander of the Wonderbolts, and as second-in-command, issues orders when Spitfire is absent in Rarity Investigates!

His name is a play on the male name "Søren" combined with soaring. Amy Keating Rogers, the writer of the first episode in which Soarin was named, was given the chance to name this character during the writing process: she named him Soarin'[sic][9] after her son, Soren;[10] the character name's apostrophe was later removed—eventually including in the credits—though some second-party materials have still included the apostrophe. He has a nickname the same as the name of G1 Earth pony colt Clipper.

Soarin's cutie mark in A Canterlot Wedding - Part 2 and the fourth of its four Hub wallpapers, in toys, and on Enterplay trading card series 1 #22 is a winged yellow lightning bolt, matching the symbol on male Wonderbolt flight suits. His cutie mark in Rainbow Falls, in Newbie Dash, in Grannies Gone Wild, and in the IDW comics' Friends Forever Issue #36 is a yellow lightning bolt through a dark gray heart-shaped symbol reminiscent of a double cresting wave. His cutie mark in 2013 fanart used for 2016 Gameloft mobile game promotional material is a winged screw,[4][5] based on the screw of Screwball's cutie mark; this alludes to the Swedish dub for season one translating "Wonderbolts" as "Underskruvarna" ("Wonderscrews").[3]

Soarin, along with Surprise and as well as Dane Tee Dove, Lady Gaval, and Tall Order, was to appear in Friendship is Magic, part 1.[11]

Soarin makes his debut in a cameo appearance in The Ticket Master. Rainbow Dash imagines herself impressing the Wonderbolts, followed by shaking hooves with Soarin.

He next appears in Sonic Rainboom, attending and judging for The Best Young Flyer Competition in Cloudsdale. He is one of the Wonderbolts that attempts to save Rarity when she plummets after her wings burn. He gets knocked unconscious by her panicked kicking, as do the other two Wonderbolts.

Soarin makes another appearance in The Best Night Ever, where he purchases an apple pie from Applejack, being her first and only customer for the night, excluding Rarity and Prince Blueblood who got their food on the house. Soarin is the first Wonderbolt to have his name revealed, when Spitfire talks to him about his pie. Rainbow Dash saves the pie when he accidentally drops it. He is shown right after, happily, if a bit messily, tucking into his treat.

He participates in the Wonderbolts derby in Sweet and Elite, coming in third.

Soarin also appears in a photo in A Canterlot Wedding - Part 2, together with Rainbow Dash while dressed in an officer's formal uniform. This is his first depiction in the series without the iconic Wonderbolt flight suit; the uniform he wears in the photo exposes his rank and cutie mark.

Soarin, along with Spitfire, appears in the episode Rainbow Falls as a member of the Cloudsdale Aerial Relay team. During practice, he gets distracted while flying and hurts his wing, and Rainbow Dash catches him before he hits the ground. He thanks Rainbow Dash for saving him as a medical pony carts him off. He later appears in the medical building, where he discovers along with Rainbow that Spitfire and Fleetfoot conspired to keep him out of action so Rainbow could take his place on their team. In the end, he flies for Cloudsdale once again and cheers for the Ponyville team during their qualifying run.

Soarin and his team appear at the Equestria Games, competing in the horse-shoe event against the other teams. Soarin also witnesses Spike singing the Cloudsdale Anthem wrong, and gets embarrassed because of it. Soarin is also one of the Pegasi to attempt to save the crowd against an icy cloud one of the archer ponies accidentally causes.

Soarin appears along with Spitfire at the welcoming party in Party Pooped, hosting their own booth.

He appears in Rarity Investigates!, assuming command of the Wonderbolts when Spitfire is missing due to a fake letter created by retired Wonderbolt veteran Wind Rider, threatening Rainbow with expulsion from the Wonderbolts permanently if she is guilty of the crime. When Rainbow is proven innocent, Soarin tasks her with taking Spitfire's place for the performance, but Rainbow manages to get Spitfire back in time for the show, much to Soarin's relief.

Soarin appears with the other Wonderbolts in Newbie Dash. After Rainbow Dash fails to impress the team and gets saddled with the nickname "Rainbow Crash", Soarin tells her the Wonderbolts call him "Clipper" for clipping a flagpole on his first day. Soarin's photo appears in the classroom in Top Bolt.

In Parental Glideance, Soarin appears with the other Wonderbolts when Bow Hothoof and Windy Whistles come to visit Rainbow Dash and later during a Wonderbolts airshow and autograph signing. He also appears as a colt in a flashback. In Marks and Recreation, Soarin briefly appears flying with other Wonderbolts. In Secrets and Pies, Soarin is one of the ponies that Pinkie Pie interrogates during her investigation of Rainbow Dash.

Soarin appears at the beginning of Grannies Gone Wild with Fleetfoot and Misty Fly, talking about the Wild Blue Yonder rollercoaster. In Yakity-Sax, Soarin performs at the Wonderbolts Derby with the rest of the Wonderbolts, but Pinkie Pie's poor music on her yovidaphone disrupts the show, causing Soarin and Spitfire to bump into Rainbow Dash. In The Washouts, he and the other Wonderbolts perform flight formations at the Wonderbolt Academy.

In The Beginning of the End - Part 2, Soarin is among the Wonderbolts that get brainwashed by King Sombra. He, along with Spitfire, Fleetfoot, Thunderlane, Silver Zoom, and High Winds block Rainbow Dash from entering Canterlot castle. Soarin and the rest of the Wonderbolts are freed from Sombra's curse following the villain's defeat.

In The Last Crusade, Soarin appears alongside Fleetfoot and Spitfire during CMC Appreciation Day, drawing the Cutie Mark Crusaders' logo in the sky. In Between Dark and Dawn, Soarin flies by during Lotta Little Things. In The Summer Sun Setback, Soarin is among the Wonderbolts to help contain the weather problem.

In The Ending of the End - Part 2, Soarin and the other Wonderbolts take part in the final battle against Queen Chrysalis, Lord Tirek, and Cozy Glow. In The Last Problem, Soarin collides with Spitfire as the team practices Rainbow Dash's routine for Twilight's coronation ceremony. He later flies with the Wonderbolts during the actual ceremony. He also briefly appears in Rainbow Dash's group shot during The Magic of Friendship Grows.

Soarin appears with the rest of the Wonderbolts during the Friendship Festival in My Little Pony The Movie.

In My Little Pony: Friends Forever Issue #36, Soarin travels to the Yaket Mountain Range after a recent poor performance at a Wonderbolts show damages his self-confidence, and he makes medicine deliveries through harsh snowy weather. He regains his confidence with the help of Rainbow Dash. In My Little Pony: Ponyville Mysteries Issue #2, he appears on the Cloudsdale bowling team.

In My Little Pony/Transformers Issue #1, Soarin appears on page 9 encountering the Autobot Windblade after Queen Chrysalis brings the Autobots and Decepticons of Transformers to Equestria. In Issue #4, Soarin takes part in the final battle against Chrysalis' changelings and the Decepticons.

In My Little Pony/Transformers II Issue #1, Soarin dares his fellow Wonderbolts to fly through a Space Bridge, and they arrive on Cybertron. In Issue #2, he and his teammates work together with Starscream, Thundercracker, and Skywarp to capture and restrain King Sombra's brainwashed minions.

In Triple Pony Dare Ya, Soarin alongside High Winds appear during Rainbow Dash's flying session at the School of Friendship when Applejack dares Rainbow Dash to fly slower.

Soarin appears in a photograph in episode 1 of Baby Flurry Heart's Heartfelt Scrapbook, "The Royal Wedding".

Soarin is a character in Gameloft's mobile game, and serves as an enemy minion during "The Crowning Achievement" and "Wonderbolt for a Day" events.

THE WONDERBOLTS are an elite squad of Pegasus ponies who perform amazing aerial feats of derring-do at competitions across the lands of Equestria. SPITFIRE is team captain and a spirited competitor. SOARIN loves blazing a trail through the clouds—but only when he's not chowing down on one of Applejack's pies. Other team members include Blaze, Fire Streak, Fleetfoot, High Winds, Lightning Streak, Misty Fly, Rapidfire, Silver Lining, Surprise, and Wave Chill.

SOARIN' balances work and play. Life is too short not to have some fun along the way. When Soarin' isn't flying high, he's looking around for his next piece of pie. He is one chill pony.

Beginning with The Maud Couple, Soarin was added to the opening intro with the rest of the Wonderbolts.

Soarin appears in a poster made for the 2011 San Diego Comic-Con. He also appears in a desktop wallpaper promoting A Canterlot Wedding.

A partially translucent mini-figure toy of Soarin was leaked in early August 2012,[12] and its corresponding collector card was leaked in late November 2012; the toy and card were released as part of the seventh wave of mystery packs in January 2013.[13] The card and Spitfire's card from the same wave misidentify the two ponies as each other, though the wave's packaging identifies them correctly. According to Spitfire's card, "SOARIN is a speedy member of the WONDERBOLTS flying team!" His name, with no apostrophe, is listed as a trademark both on her card and on the packaging of the wave.[8]

"I'll take that big apple pie!"
— To Applejack in The Best Night Ever

"Uh, my wing hurts, but I-I'm sure it'll be okay by the competition."
— Rainbow Falls

"You sure have nice friends. Nopony's been by to visit me. Eh, too busy practicing, I guess."
— To Rainbow Dash in Rainbow Falls

"I have to warn you, if you sent that letter, the bylaws are clear. I'd have no choice but to ban you from the Wonderbolts forever."
— To Rainbow Dash in Rarity Investigates!

"Wonderbolts look out for each other!"
— Rarity Investigates!

"My nickname's "Clipper". You know why they call me that? [...] Because I clipped my wing on a flagpole as I was landing on my first day."
— Newbie Dash

"Only the coolest rollercoaster ever!"
— Grannies Gone Wild 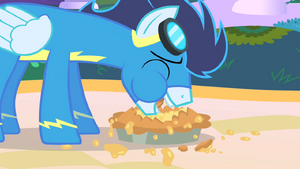