My Little Pony Friendship is Magic Wiki
Register
Don't have an account?
Sign In
Advertisement
in: Software
English

Ruckus Media Group published several educational My Little Pony apps on the iOS App Store. Following the apparent dissolution of the company in June 2020 (or close to that time), all of their apps have been discontinued and their website is no longer available.

Ruckus Media Group produced seven English-language interactive storybook apps between 2011 and 2016. The apps are loosely based on Friendship is Magic episodes, pairing reused visuals from the show with new narration, and also contain minigames. These storybooks were also available through other Ruckus Media Group apps, except for Twilight Sparkle, Teacher for a Day, which was replaced by an alternate version titled Twilight Sparkle's Special Lesson.

My Little Pony Read & Play was released for iOS on July 20, 2018. The app provided a subscription service for the digital My Little Pony content sold by Ruckus Media.

My Little Pony is a free-to-play video game for iOS, iPadOS, tvOS and Android mobile devices published by Gameloft and released on November 8, 2012. The gameplay consists of rebuilding Ponyville, along with several minigames and a storyline concerning Nightmare Moon. Features can be unlocked by spending in-game currency or by purchasing them.

Egmont released two interactive storybook apps, both of which have been discontinued.

A My Little Pony: Friendship is Magic LeapFrog Explorer Learning Game for LeapPad2, LeapPad1, LeapsterGS and Leapster Explorer systems was released in 2013.[3]

My Little Pony: Story Creator (originally My Little Pony: Lights, Camera, Ponies!) was released for iOS on September 20, 2016, and for Android on March 1, 2017. The app allows the user to create their own interactive storybooks using Friendship is Magic and Equestria Girls characters, props, backgrounds and sounds, some of which are available through in-app purchases.

My Little Pony is an app published by the Dutch company Uitgeverij Big Balloon B.V. for iOS on November 26, 2013. The app has been discontinued. The app comprises My Little Pony-themed minigames and learning activities, most of which were only available following an in-app purchase.

E-puzzle My Little Pony - aplikacja do kolekcjonerskiej serii puzzli Trefl (My Little Pony e-puzzle - application in the Trefl collectible puzzles series) is an app published by the Polish company Trefl SA for iOS on November 13, 2014. The app contains a coloring book, a connect-the-dots game, and a heart-shaped photo frame featuring Rainbow Dash and Fluttershy. The app is only available in Czechia, Hungary, Poland, Romania, Slovakia and Ukraine. The app was delisted some point after March 26, 2022.

My Little Pony Diary is an app published by eKids/KIDdesigns for iPadOS on December 16, 2014. The app comprises "a digital diary filled with custom ponies, cool photos and digital stickers". Many of the app's features are only available following an in-app purchase.

Eaglemoss Publications Ltd published two My Little Pony apps for iOS and Android, both of which have been discontinued.

Equestria Girls was released by Hasbro for iOS on June 11, 2015, and for Android on July 16, 2015. The game was unpublished from the Google Play Store on June 25, 2019,[9] but remains available on the iOS App Store. The game is set in Canterlot High School and is loosely based on the events of the first three Equestria Girls films.

In the main game, the player is a student at Canterlot High and interacts with other characters in order to complete "friendship quests", and can purchase clothing and accessories with in-game currency to customize their character. The app also has several minigames, consisting of DJ PON-3, Archery, Motocross, Pinkie Pie Slumber Party and Cosmic Battle. The player can acquire in-game currency through in-app purchases. The player can also scan tags on certain Equestria Girls toys to unlock clothing, accessories or daily rewards, as well as the ability to summon Applejack, Fluttershy, Pinkie Pie, Rainbow Dash, Sunset Shimmer or Twilight Sparkle without in-game currency.

My Little Pony: Puzzle Party was released by Backflip Studios for iOS on October 11, 2016, preceded by a soft launch for Android earlier in 2016 that was limited to Australia, New Zealand, Mexico and Spain.[10] The game was discontinued on May 25, 2017, in accordance with the settlement to a copyright infringement lawsuit against Hasbro and Backflip Studios.[11] It is a freemium match-three game, similar to Toy Blast[12][13] and Candy Crush Saga. It includes music from the series as well as new Mane Six and Spike voiceovers from Tara Strong, Ashleigh Ball, Andrea Libman, Tabitha St. Germain and Cathy Weseluck.

My Little Pony Stickers was released by Hasbro for iOS on April 29, 2017. The app has been discontinued. The app comprises instant messaging stickers featuring the Mane Six and their cutie marks.

My Little Pony Comics was released by IDW Publishing for iOS on June 30, 2015, and for Android on September 8, 2015. Following the unexpected shutdown of the app provider, Makefire,[14][15] the app's functions were integrated into the new app IDW Digital Comics Experience in May 2021; the iOS app's original functionality was replaced with a form for transferring purchases to the new app on May 21, and the Android app was unpublished from the Google Play Store on May 23.[16] The app allowed users to purchase and read IDW's My Little Pony comics.

My Little Pony İzle (Watch My Little Pony) is a Turkish-language app published by Turkuvaz Radyo TV Haberlesme ve Yayincilik A.S. for iOS on September 28, 2015, and for Android on October 1, 2015. It is a streaming app for the Minika Çocuk Turkish dub of Friendship is Magic, and also contains bonus media such as songs and image galleries.

My Little Pony: Harmony Quest was released for iOS on June 21, 2016, and for Android on August 30, 2016. It is a 2D platform game in which the Mane Six fight a changeling invasion led by Queen Chrysalis and travel across six regions of Equestria to rescue trapped ponies and recover the Elements of Harmony. Each of the Mane Six has unique abilities which are used when fighting changelings and solving problems. The player can unlock members of the Mane Six and their abilities through in-app purchases.

My Little Pony: Rainbow Runners was released for iOS on June 2, 2017, and for Android on September 29, 2017. It is an auto runner game in which the Mane Six dodge obstacles to complete levels and restore color to Ponyville following a mishap caused by Discord. Each of the Mane Six has a different Rainbow Power, which when used in a level temporarily grants them a special ability and causes their appearance to change. The player can unlock members of the Mane Six through in-app purchases.

My Little Pony: Pocket Ponies was released for iOS on July 18, 2018, and for Android on January 22, 2019. It is a block kuzushi-like game in which the player, as one of the Young Six, battles other Friendship is Magic characters using different Pocket Ponies (chibi figurines shaped like various characters) in order to become the champion of a Pocket Pony Championship hosted by the School of Friendship. The game's audio features new voice lines by Tara Strong as Twilight Sparkle.

In each battle, the player uses Pocket Ponies to fire balls at their opponent's enemy figurines (changelings, parasprites and pukwudgies), with the objective of destroying the figurines before any of them reach the end of the conveyor belt. The balls can be fired in different directions to ricochet off walls and objects. Each of the Pocket Ponies has a unique Specialty power that can be used in battles, and the Pocket Ponies can be leveled up through gameplay to increase the number of balls fired per shot. The game's setting, the School of Friendship, is divided into the Hallway, Courtyard, Theater and Forest. Each location in the school has different characters to be fought, leading to a boss fight against one of the "Pocket Pony Masters" (Rainbow Dash, Applejack, Pinkie Pie and Fluttershy respectively). The player can acquire in-game currency through in-app purchases.

My Little Pony: Color By Magic

My Little Pony: Color By Magic was released for iOS on March 23, 2020, and for Android on July 3, 2020. It is a coloring game in which various Friendship is Magic drawings are colored in by the player. As the player completes more drawings and progresses through the game, Twilight Sparkle and Spike gradually restore and decorate an abandoned art museum, the Museum of Friendship. The player can bypass the game's timers through in-app purchases.

My Little Pony AR Guide was released for iOS on August 24, 2016, and for Android on September 5, 2016. The app was unpublished from the Google Play Store on January 12, 2021,[17] but remains available on the iOS App Store. The app comprises augmented reality visualizations of the Mane Six and Spike, a "dual user mode" in which characters on two different devices can interact with each other, and a character customizer.

My Little Pony: A Maretime Bay Adventure is a console video game by Melbot Studios and Outright Games releasing on May 27, 2022, for at least the Nintendo Switch.[18]

Hasbro and the Hub Network's websites, as well as other official websites, have various Friendship is Magic and/or Equestria Girls material, including Flash and HTML5 games. Many games are no longer accessible normally due to the discontinuation of Adobe Flash Player.

Hasbro's official My Little Pony website had a directory of online Friendship is Magic games between 2010 and 2021. Before September 2010, the site had a small number of Generation 3 games, some of which stayed on the site until 2017. In August 2013, Hasbro's Equestria Girls website was introduced, with its own games.

These games stopped working in most web browsers at the end of 2020. Their description pages were removed from the website in February 2017.[20] The game files are still available for most of the games on the website but cannot be played.

My Little Pony Friendship is Magic: Racing is Magic is an online Flash game available on Hubworld.com. It was first published in early February 2013, initially as a sneak peek only made available after entering the code HUBTV.

Fighting is Magic was a fan-created fighting game, not licensed by Hasbro, that has received various media coverage. However, its development was permanently terminated after Hasbro issued a cease-and-desist order against the developers, stating they were infringing on their trademarks.

Despite this, the development team later started working on a spiritual successor to the game based on original characters, not related to the My Little Pony franchise, created voluntarily by Lauren Faust herself.

An image that was used by Hasbro's My Little Pony Facebook page during August 12-13, 2013[33] includes a piece of Golden Oak Library background art[34] that was previously used for the game. Enterplay collectible card game High Magic #33 SR card of Sonata Dusk includes in flavor text a mention of Fighting is Magic. 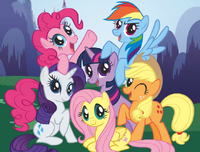