For the village of the same name and the flower of a similar name, see Locations#Somnambula and Magic#Magical plants.

Somnambula (/sɒmˈnæmbjuːlə/, sahm-NAM-byoo-luh) is a female Pegasus and figure of Equestrian legend first mentioned in season six's The Crystalling - Part 2. She makes her first appearance in the IDW comics' My Little Pony: Legends of Magic Issue #5 and her first in-show appearance in the season seven episode Daring Done?

Somnambula shares her name with a G1 villain, a human witch, from the two-part My Little Pony n' Friends episode of the same name.

The name "Somnambula" is derived from the word "somnambulism", another word for sleepwalking.

In Daring Done?, Somnambula is the namesake of a village in Southern Equestria, and a pony of legend as told by one of its villagers. In the story, the village is menaced by an evil sphinx that claims most of their crops for herself. Somnambula uses what little she has to offer, such as her pearl necklace, to provide food to the poor villagers and give them hope. Inspired by Somnambula's compassion, the pharaoh's son, Prince Hisan, stands up to the sphinx, but the beast captures him and challenges the ponies with a riddle in exchange for his release.

Somnambula accepts the sphinx's challenge and correctly answers the riddle, enraging the sphinx. Fearing the monster would go back on her promise, Somnambula asks for one more challenge and tells the sphinx to leave the kingdom forever if she completes it. The sphinx thus makes Somnambula walk toward Hisan across a narrow bridge—blindfolded and without flying. Guided by Hisan's voice, Somnambula succeeds with a leap of faith, and the sphinx furiously flies away. In gratitude for saving him, Hisan replaces Somnambula's pearls with a string of glowpaz, with a statue erected and the village named in her honor.

In the present day, Somnambula's statue is accidentally destroyed during one of Daring Do's adventures, and A. K. Yearling later uses her funds to restore it.

In the season seven finale Shadow Play, Somnambula is revealed to be one of the six "Pillars of Old Equestria" with Rockhoof, Mistmane, Flash Magnus, Mage Meadowbrook, and Star Swirl the Bearded, representing the Element of Hope. Long ago, she and the other Pillars were brought together by the unicorn Stygian to battle a great evil. When Stygian later turned into the Pony of Shadows, Somnambula and the others sacrificed themselves to imprison him in limbo.

In present day, Pinkie Pie retrieves the blindfold that Somnambula wore during the sphinx's trial for a ritual to free the Pillars from limbo. When the Pony of Shadows is freed along with them, Somnambula and the other Pillars team up with the Mane Six to separate Stygian from the darkness and banish it to limbo once again.

In The Ending of the End - Part 1, Somnambula and her fellow Pillars face off against Lord Tirek, but they are easily overpowered and drained of their magic due to Tirek being empowered by the Bewitching Bell. In Part 2, she and the Pillars keep Tirek, Queen Chrysalis, and Cozy Glow busy while Twilight's friends escape. She is later present during the final battle against the villains and helps the Mane Six and Young Six defeat them. In The Last Problem, Somnambula attends Twilight Sparkle's coronation ceremony. She also briefly appears in Pinkie Pie's group shot during The Magic of Friendship Grows.

In the My Little Pony: Legends of Magic series, Somnambula appears on cover A of Issue #1 and as the central character of Issue #5. In the latter issue, Pinkie Pie reads Sunburst a story about Somnambula written by Star Swirl the Bearded, which details her role as Prince Hisan's advisor after rescuing him from the sphinx. One day, a giant snake appears in the village and starts devouring Hisan's palace and royal guards. Somnambula, depicted as a blithe optimist throughout the entire ordeal, requests a long wooden pole from the exasperated prince before flying up to question the snake, and it swallows her as well.

Somnambula ventures deeper into the snake's belly, using her luminescent glowpaz necklace to light the way. She finds various ponies and animals who have also fallen victim to the snake, giving each of them a piece of glowpaz and directing them to the mouth. Somnambula eventually discovers the cause of the snake's massive size to be an old wizard's cursed stone that it ingested. She uses the wooden pole to pry open the snake's jaws enough to toss the stone out, causing the snake to shrink and spit out everyone it devoured at once. Somnambula is subsequently hailed as a hero, and Hisan swears to never again question her judgment.

Somnambula also appears on My Little Pony: Legends of Magic Issue #7's cover B and cover RI and in Issue #10 freeing Prince Hisan from a cursed emerald brooch. On Issue #11 page 13, Flash Magnus calls her Cleopatrot. In subsequent issues, she and the other Pillars face the Sirens and later an alternate version of the Pony of Shadows.

In My Little Pony: Friendship is Magic Issue #84, Ocellus briefly takes on Somnambula's appearance as part of her school project. She also appears on the A cover of Issue #88. In Issue #102, Somnambula aids in the fight against the Knights of Order, assisting the other Pillars in freeing Rockhoof and Flash Magnus from Morrigan's mind control and helping finally defeat the Knights' leader King Danu.

Somnambula appears in an illustration in episode 4 of Fundamentals of Magic, "Magical Objects".

Somnambula is a character in Gameloft's mobile game, and serves as a boss battle helper during the "Reflections of Harmony" event. She also plays a role in the "Challenge of the Sphinx" event, in which several past inhabitants of Somnambula appear in present-day Equestria.

"That is a riddle we must unravel. And quickly."
— Shadow Play - Part 2

"Each of us infused a crystal seed with our magic in hopes that it would grow into a force for good."
— Shadow Play - Part 2

"I am glad we have the chance to see what has grown from our efforts so long ago."
— Shadow Play - Part 2

"Focus on my voice and feel yourself unlock your potential. Imagine everything that troubles you as one big cloud. Now let it float away. You are relaxed. Free to do anything you wish."
— A Rockhoof and a Hard Place

"Who wants to race me to the end of the street?"
— My Little Pony: Legends of Magic Issue #5

"Prince Hisan, I know I'm your trusted advisor, but I would think a prince would know how to take care of a snake. We get a lot of those here. Most of the time they're not even vicious."
— My Little Pony: Legends of Magic Issue #5

"The inside of a snake is there whether you see it or not. Huh, I guess that's kind of like hope. There's always hope, even when you can't see it."
— My Little Pony: Legends of Magic Issue #5

"Aren't you just a Grumpy Gus."
— My Little Pony: Legends of Magic Issue #5

"Apologies, Fluttershy. I still think -- no, I'm CERTAIN -- that you're the one pony who can save us. If you can't believe in yourself, then believe in me, who believes in you!"
— My Little Pony (mobile game) 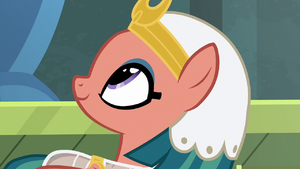