Sonata Dusk is a female siren and one of the main antagonists in My Little Pony Equestria Girls: Rainbow Rocks. She is a backup singer in her band the Dazzlings, rivaling the Rainbooms.

Like those of her bandmates Adagio Dazzle and Aria Blaze, Sonata Dusk's fin-like wings are translucent and non-feathered. Her non-siren forms are similar in color scheme to S05E24 Unnamed Earth Filly #1.

In music terms, the word "sonata" refers to a composition for an instrumental soloist, often with a piano accompaniment.

Both the original animatic of the opening credits and the doll merchandise depict Sonata wearing purple tinted sunglasses. On the doll, her blue belt also is slightly different as her belt hangs off her waist with cutie mark chains hanging off of it. Only her blue belt appears in the final film.

In the film, Sonata and the other Dazzlings are introduced in the human world. They are sirens from Equestria who were banished to the human world by Star Swirl the Bearded before they could conquer Equestria with their dark magic. They first appear in a café causing tension between the patrons, and Sonata briefly argues with Aria Blaze. She and the Dazzlings later convince the students with their music to turn the friendly Musical Showcase into a Battle of the Bands.

Sonata and the Dazzlings use their siren's songs to control the students' opinion and advance through the competition bracket. In the final battle against the Rainbooms, Sonata and the Dazzlings are eventually defeated, and the gem pendants with which they controlled the students are destroyed. As a result, their inability to sing leads to them being chased off in disgrace.

Aside from flashbacks, Sonata's true form is never physically shown in the film, but she and her fellow band members gain pony-like ears, extended ponytails, and translucent fin-like wings. They also summon astral projections of their siren forms from their pendants.

A drawing of Sonata's siren form is briefly seen in Friendship Games during the CHS Rally Song. Her siren form can also be seen in one of the human Twilight Sparkle's photos.

Sonata Dusk, alongside Adagio Dazzle and Aria Blaze, make their return in the music video Find the Magic, performing at the Starswirled Music Festival and singing about adjusting to life without their magic.

Sonata along with the rest of the Dazzlings return in Sunset's Backstage Pass as performers at the Starswirled Music Festival. They appear as suspects to who has been causing the time loop, only for Sunset to misunderstand that she really meant that their song, Find the Magic, was looped while they were on stage. When Sunset Shimmer checks their van only to not find the Time Twirler and after reading Adagio's mind, Sunset finds out that they weren't responsible. Sonata and the rest of the Dazzlings continue to harass Sunset before leaving in their van.

Sonata mentions that she once accidentally started a fire by putting tacos in a toaster.

In the season seven episode Shadow Play - Part 2, Sonata and her fellow sirens appear in flashback, creating discord among ponies with their singing, before they were defeated by the Pillars of Old Equestria and banished by Star Swirl the Bearded.

Sonata appears alongside Adagio and Aria in their siren forms in My Little Pony: FIENDship is Magic Issue #3 facing off against Star Swirl the Bearded and in My Little Pony: Legends of Magic using their hypnotic singing on Stygian's village before being defeated and banished by the Pillars of Old Equestria.

Sonata Dusk is featured in the Rainbow Rocks screenplay novelization The Mane Event and Panorama Sticker Storybook and appears again in Make Your Own Magic: Starswirl Do-Over.[3]​[​specify​]​

Quirky and unpredictable, Sonata Dusk’s whimsical approach to everything adds a special kind of sparkle to The Dazzlings. Audiences are always enchanted by her magical voice, and her antics only turn up the volume.

Sonata Dusk, the member of the trouble-making band, The Dazzlings. Even though Sonata can be a bit careless sometimes, she still has a rockin’ sense of style. This fashion star is about to meet her match![4]

A doll of Sonata Dusk has been displayed, with packaging additionally showing her and Aria Blaze's pony versions, at the 2014 American International Toy Fair[5] and on Hasbro's online listings of the product.[6]

In the High Magic expansion set of Enterplay's collectible card game, card #33 SR of Sonata Dusk depicts her as an Earth pony and lists the quote "Over here! No wait, this way! Omigosh, is that Fighting is Magic?! I got next!"

Throughout Rainbow Rocks, Sonata Dusk is shown to be somewhat air-headed and carefree, similar to Pinkie Pie. For example, before the Dazzlings sing Battle in the cafeteria, Sonata is more focused on getting lunch since it is Taco Tuesday. Also, she and Pinkie are the only ones who actually seem to enjoy Snips and Snails' rap performance. Sonata doesn't pick up on Adagio's sarcasm when she says she "loves" the human world, and she speaks candidly with Sunset Shimmer about her and her friends' true nature, nearly blowing their cover. In addition, she frequently argues with Aria Blaze over trivial matters. Despite this, she can be just as cruel and devious as her bandmates, if at times unintentionally so, as evidenced in her interactions with Sunset Shimmer and Trixie.

"For realsies? Because I think this place is the worst."
— My Little Pony Equestria Girls: Rainbow Rocks

"Hello? We sing, like, all the time! It's how we get people to do what we want."
— My Little Pony Equestria Girls: Rainbow Rocks

"Ohhhh, yeah! Th-What she said I meant to say. That's what I meant. To say."
— My Little Pony Equestria Girls: Rainbow Rocks

"But we can get lunch after though, right? It's Taco Tuesday!"
— My Little Pony Equestria Girls: Rainbow Rocks

"It's the fruit punch, isn't it? I knew I used too much grape juice!"
— My Little Pony Equestria Girls: Rainbow Rocks

"What do you know about good fruit punch?"
— My Little Pony Equestria Girls: Rainbow Rocks

"She didn't shove them. She pulled a lever."
— My Little Pony Equestria Girls: Rainbow Rocks

"How was I supposed to know you can't put tacos in the toaster?"
— My Little Pony Equestria Girls: Sunset's Backstage Pass

"I think you're worser than the worst, Aria."
— My Little Pony Equestria Girls Rainbow Rocks - The Mane Event

"Over here! No wait, this way! Omigosh, is that Fighting is Magic?! I got next!"
— Enterplay collectible card game High Magic #33 SR card of Sonata Dusk 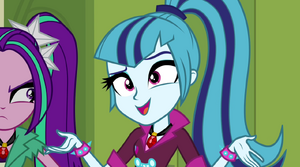