For Rainbow Dash's aerobatic maneuver, see Sonic rainboom (event).
For the band in the Equestria Girls franchise, see The Rainbooms.

Sonic Rainboom is the sixteenth episode of the first season of My Little Pony Friendship is Magic. Rainbow Dash is worried about her performance in the Best Young Flyer competition, but she pulls off a sonic rainboom, impressing the crowd.

This is one of the few episodes in which the word "loser" is not muted on the Treehouse channel airings. Rainbow Dash says "The Wonderbolts will never let a loser like me join!"

Two sound clips from Friendship is Magic, part 1 are reused. Rarity's laugh is the same as her shocked scream when she noticed Twilight's unkempt hair. Fluttershy's inhale is Pinkie Pie's gasp (also used for the crowd in that episode when Celestia is revealed to be missing) played backwards.

According to writer M. A. Larson, the episode was originally intended to show the concept of lightning kept in glass jars, but this was cut for time. The concept would later be recycled and used in the season five episode Tanks for the Memories.[2]

The scene when Rainbow Dash saves Rarity and the Wonderbolts reappears in Deep Tissue Memories.

Rainbow Dash paces around Fluttershy in a review of their preparation for the Best Young Flyer competition. Satisfied that Fluttershy has an understanding of the elements of a good cheer, Rainbow Dash wants her to go over the cheer itself. Much to Dash's frustration, Fluttershy's first three attempts are feeble. On the fourth attempt, which is just as weak, Rainbow collapses backward onto the grass, to which Fluttershy says, "Too loud?"

Preparing for the competition

Fluttershy watches Rainbow Dash practice a routine for the Best Young Flyer competition. Rainbow Dash unsuccessfully attempts to perform a sonic rainboom and ends up crashing into the Golden Oak Library. She knocks over books that her friends just finished sorting. Rainbow Dash tells her friends about the competition and says that the competition's grand prize is a day with her idols, The Wonderbolts. Before she leaves, she tells Fluttershy to work on her cheering. Rarity urges Twilight Sparkle to find a spell that will allow the non-Pegasi friends to access Cloudsdale so they can support Rainbow Dash. Rarity volunteers to be the test subject of a spell that gives her a pair of beautiful butterfly wings.

In Cloudsdale, Fluttershy and Rainbow Dash run into three bullies who say that Rainbow Dash can't pull off the sonic rainboom. She doubts her own flying skills after the bullies leave. The rest of the Mane Six arrive and explain that Twilight cast a spell that enables them to walk on clouds like Pegasi. The friends tour the weather factory, where Pegasi manufacture snowflakes, rainbows, and clouds. The workers stop to admire Rarity’s wings, much to Rainbow Dash's chagrin; one worker even suggests that she enter the Best Young Flyer competition. Rarity decides to participate in the competition, much to Rainbow's shock.

At the Cloudeseum stadium, the competition begins. Princess Celestia and three Wonderbolts (Spitfire, Soarin, and Misty Fly) are the judges. The competitors have number tags on their flanks:

Rainbow Dash switches her tag with other competitors to delay her turn. When everyone except Rainbow Dash and Rarity has gone, the announcer tells them that they will have to perform together due to time constraints.

Rainbow Dash makes several mistakes in the first two phases of her routine. She starts phase three: the sonic rainboom. Meanwhile, Rarity, dressed in an extravagant costume, flies higher to let the sunlight illuminate her wings. However, the wings are too delicate for the sun's rays and they quickly burn to ashes, sending her plummeting towards the ground. The Wonderbolts immediately dive to rescue her, but Rarity’s flailing limbs end up knocking them out cold. Seeing the potentially deadly situation they're in, Rainbow Dash hurtles down to save them. She pulls off the sonic rainboom, exciting Fluttershy into a loud cheer and astonishing the rest of their friends into speechlessness, and catches them just before they hit the ground.

Rarity apologizes to her friends for getting carried away with her wings, and they forgive her. Princess Celestia presents the grand prize for Best Young Flyer to Rainbow Dash. Rarity gives this episode’s friendship report and says that she learned to be there for her friends while keeping her hooves on the ground, literally and figuratively. The three bullies congratulate and apologize to Rainbow Dash, who forgives them. Dumb-Bell asks her if she wants to hang out with them and hopes that she will teach them how to do the sonic rainboom, but Rainbow Dash replies that she's already got plans to hang out with the Wonderbolts. 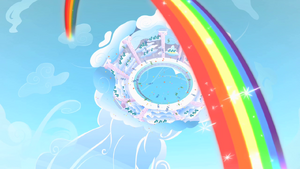