"Now what have we learned?"

Rainbow Dash goes over the elements of a good cheer with Fluttershy.

"So now that you know the elements of a good cheer...

Fluttershy about to inhale.

Fluttershy inhaling deeply in an attempt to give a loud cheer.

"Too loud?"
Add a photo to this gallery

Rainbow Dash on top of a cloud.

Fluttershy watches from below.

About to make her moves.

She's so fast, she leaves a rainbow trail behind her.

The flowers getting swayed by Rainbow Dash.

Rainbow Dash tries to get her speed up.

She knows this can't end well.

If she's trying to increase her speed to do the Sonic Rainboom, why isn't she flapping her wings?

Oh. My.
Add a photo to this gallery

"Thank you so much for helping me clean up all these books, guys."

The clouds before they clear, to show Rainbow Dash.

Result of the Sonic Failboom

Fluttershy upon the window sill.

"Did my cheering do that?"

"Actually, it wasn't all bad. I particularly liked it when you made the clouds spin."

"Ooh, I'd love to see you make a sonic rainboom!"

Twilight asks what a sonic rainboom is, and Pinkie tells her, "You really need to get out more."

"The sonic rainboom is legendary! When a Pegasus like Rainbow Dash gets going soo fast..."

"BOOM! A sonic boom and a rainbow can happen all at once!"

"And Rainbow Dash here's the only pony to ever pull it off."

"Yeah, but you're gonna do it again, right?"

Rainbow Dash is uncertain when Pinkie asks her that.

"A-are you kidding? I'm the greatest flyer to ever come out of Cloudsdale! I could do sonic rainbooms in my sleep!"

"The grand prize is an entire day with The Wonderbolts. A whole day of flying with my life-long heroes..."

"I'm gonna go rest up. Don't want to over-prepare myself, you know."

I need a cheering section to match my spectacular performance!

Fluttershy is unsure, if she could scream loud enough to help Dash.

"She was tootin' her own horn louder then the brass section of a marching band!"

Bump! Rarity shoves Twilight with her butt to find a solution to the flight-less ponies' problem in reaching Cloudsdale. Rarity really wants to help Rainbow Dash.

During the transformation- before everything goes black.

Aren't they beautiful?
Add a photo to this gallery

The amazing city in the sky, Cloudsdale.

"Ask her about the sonic rainboom!"

Sorry...I'm trying to be more assertive...

Anyway she is going to do a sonic rainboom

MY LIFE IS RUINED!
Add a photo to this gallery

Rainbow and Fluttershy are amazed by Rarity's wings.

Only Pegasus ponies can walk on clouds...

The front of a boutique in Cloudsdale.

See? We can walk in Cloudsdale...

Fluttershy, happily walking on clouds.
Add a photo to this gallery

This is secretly Rainbow Factory.

Why snowflakes are all so special

The group watch as the snowflakes are being made.

Pinkie dips her hoof into a pool and tastes it.

Pinkie starts to get the feeling tasting the rainbow wasn't such a good idea after all.

What happened, Pinkie? I thought you liked spicy stuff.

Wishing somepony else is green with envy!

Pinkie discovers why it's a bad idea to taste the rainbow.

Pinkie's face turns the colors of the rainbow!

That´s stuff from my nightmares.

The rainbow must be supernova spicy because Pinkie is the same pony who eats her cupcakes with hot sauce.

"Oh, they were just admiring my wings, Rainbow Dash."

Basking in her own glory.

Fluttershy tactfully suggests that they go and see the cloud manufacturing process.

The ponies being lead through the Weather Factory.

So that is how clouds are made!

All eyes are on Rarity.

"Oh, how can you ask me to put away perfection?"

That laugh, it's going to haunt me forever

What? Rarity is joining the competition?

Rarity? Wha-why?
Add a photo to this gallery

The floating cloud colosseum where the Best Young Flyers competition is held.

Wave to your subjects

Nervous as she is, The Wonderbolts' performance always places a smile on her face.

Spitfire and the other two Wonderbolts.

Caramel? What are you doing here?

"I'm number four, and I need just one more itsy-bitsy minute. Be a dear and have somepony go ahead of me, hmm?"

But, I still have to go on!

"Hmm.. Wonder how come we haven't seen Rainbow Dash or Rarity yet? The competition's almost over."

A nervous Rainbow Dash comes out.

That's a HUMAN hand!! WHERE DID SHE GET THAT!?

"I hope you don't mind, but I took the liberty of changing our music."

"That "rock and roll" doesn't really match my wings."

Is she serious? I'm nervous!

The nerves get her in the first stage of her performance...

...while Rarity gets it spot on

Readying herself for the last part where she will fly up to the sun.

Come on Rainbow, you can do this!

Flight of the two elements.

Pinkie's tail should be twitching about now.

Rarity finishes on a high...

Now I know how Icarus felt.

Dashing after a falling Rarity.

The Wonderbolts to the rescue!

Soarin diving to save Rarity.

Great, four rescue situations for the price of one.
Add a photo to this gallery

Forget the show, I need to save my friend!

Dashing down to save Rarity.

Fluttershy can't bear to watch her friend fall to her death far below.

Even Rarity is amazed.

Four of the Mane 6 watching the Sonic Rainboom.

She's going so fast, she needs to close her eyes.

Rainbow Dash trying to catch up with the falling ponies.

About to perform the Sonic Rainboom!

She did it! A Sonic Rainboom!

A spectacular rainbow is performed.

Turns out a sonic rainboom is even more colorful than what Rarity had in mind!

Fluttershy jumps up and down and screams, "SHE DID IT!"

Rainbow Dash to the rescue!

Hang on tight, Rarity! It's gonna be quite a ride!

Rainbow Dash is the hero of the hour.

Rainbow Dash, with Rarity and the Wonderbolts.

Grateful for her victory.

Rainbow Dash with tears in her eyes.

Rarity thanking Rainbow for saving her life. (How did you get up there, Lyra?)

Rainbow Dash's beautiful rainbow over Cloudsdale.
Add a photo to this gallery

Rarity apologizing to her friends.

We still love you!

"And I'm especially sorry that I was so thoughtless as to jump into the contest at the last minute after you had worked so hard to win it. Can you ever ever forgive me?"

Rainbow wishes she could have meet the Wonderbolts when they were awake.

The Wonderbolts show up.

The Wonderbolts thanking Rainbow Dash, much to her surprise.

Princess Celestia arrives alongside her guards.

Celestia with the Mane six.

Rarity feels sorry for jumping into the competition at the last minute.

"Princess Celestia, I am sorry I ruined the competition. Rainbow Dash here really is the best flyer in Equestria."

I'm so proud of you, Rainbow Dash.

I get the crown?!

The new best flyer in Equestria!

The best thing about winning the Best Young Flyer competition isn't receiving an award from Princess Celestia, it's showing everypony online that I did.

"Have you learned about friendship from this experience?" Twilight: "I did, Princess, but I think Rarity learned even more than me."

"I certainly did. I learned how important it is to keep your hooves on the ground, and be there for your friends."

Today is a day to remember!

Her crown is 20% more awesome than Celestia's.

The two stallions who made fun of Rainbow Dash.

The bullies apologize to Rainbow Dash about before and want to hang out with her...

...too bad she's got plans with the Wonderbolts!
Add a photo to this gallery 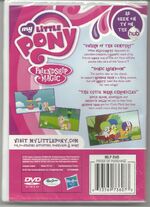 Add a photo to this gallery
Retrieved from "https://mlp.fandom.com/wiki/Sonic_Rainboom/Gallery?oldid=2184161"
Community content is available under CC-BY-SA unless otherwise noted.