My Little Pony Friendship is Magic Wiki
Register
Don't have an account?
Sign In
Advertisement
in: Events
English

For the band in the Rainbow Rocks movie, see The Rainbooms.
For the episode, see Sonic Rainboom.

A sonic rainboom is an aerobatic maneuver that is performed by Rainbow Dash in several episodes. "Sonic rainboom" is a portmanteau of "sonic boom" and "rainbow." Dash first performs this stunt in the season one episode Sonic Rainboom. It is characterized by a vibrantly-colored ring that expands from the point of the sonic rainboom's occurrence accompanied by a shockwave and a rainbow wake trailing behind it.

Appearances in the series

Sonic rainbooms are first mentioned in the titular episode, where Dash practices her routine for the Best Young Flyer competition. Her ability to perform the maneuver is questionable through the first half of the episode with her dedicated practice making seemingly no progress towards being able to complete it. Later in the episode, however, Dash pulls it off in the process of her frantic effort to save Rarity and three Wonderbolts who are plummeting down to Earth. The move dazzles the stadium's audience and boosts the Pegasus's speed, allowing her to catch the group in distress before impact. This event is later mentioned by Spitfire in the episode The Best Night Ever.

The second time sonic rainbooms are mentioned is in The Cutie Mark Chronicles. Rainbow Dash, in a flashback, races against two other Pegasus ponies, and unwittingly performs a sonic rainboom while she speeds along the race's obstacle course. She earns her cutie mark almost immediately afterwards.

"Most people thought that the Sonic Rainboom was just an old mare's tail. But that day... The day I discovered racing... I proved that the legends were true. I made the impossible happen!"
— Rainbow Dash about her flashback

Both this sonic rainboom and the one in Sonic Rainboom are performed when Rainbow Dash is leading with both front legs forward, while in her failed practice attempts she is leading with a single leg.

The very same sonic rainboom that earned Dash her cutie mark was involved in the other leading characters earning theirs. Applejack, who was visiting relatives in Manehattan, sees its rainbow wake which seemed to point back to Ponyville, and discovers she wants to work on her family's farm. Fluttershy calms animals that have been frightened by the sonic rainboom, and discovers her affinity to animals. Rarity witnesses a giant rock getting cracked open by the sonic rainboom, and discovers it contains gems. She affirms her love for fashion and gems and gets her cutie mark. Twilight Sparkle is personally affected by the sonic rainboom; it takes place during her entrance exam for Celestia's School for Gifted Unicorns, and sends her into a powerful magical state which allows her to hatch Spike. After a few accidents and Princess Celestia's intervention, Twilight discovers her cutie mark. Pinkie Pie draws inspiration from the sonic rainboom's rainbow wake and holds her very first party, which earns her her cutie mark. Pinkie Pie mentions in Sonic Rainboom that she has never seen a sonic rainboom before in her life. This contradicts her flashback in the episode where she witnesses one, however she only realizes what it actually is at the end of the episode.

A Canterlot Wedding - Part 1 and Part 2

The sonic rainboom is featured again in the season 2 finale, A Canterlot Wedding. Rainbow Dash is instructed by Princess Celestia to perform a sonic rainboom for the wedding of Shining Armor and Princess Cadance; later in Part 1, she mentions having been busy preparing for it. She performs the maneuver in Part 2 right as the couple kisses at the end of the ceremony as instructed, and seems to do so very quickly and effortlessly as she bolts her dress off.

Interestingly, this is the first occasion when Rainbow is shown as creating a rainboom in a climb. In both previous occasions, she needed to accelerate in a dive to reach the required velocity before arcing upwards into a climb.

In Part 1 of the season five finale, Twilight gives a lecture at the School for Gifted Unicorns about Cutie Mark Magic and discusses the cause and effect of the very rainboom that give the Mane Six their cutie marks. Using a spell to travel back in time, Starlight Glimmer spends most of the finale preventing the rainboom from occurring.

The rainboom is briefly mentioned by Rainbow Dash in this episode.

Rainbow Dash creates a rainboom when she goes to tell others around Equestria about Twilight's play. Similar to A Canterlot Wedding, she does it in a climb.

The End in Friend

During Rainbow Dash and Rarity's second go in their game of buckball, Rainbow creates a rainboom to kick the ball. This rainboom is created by performing a small vertical loop after flying still.

At the end of Time to Be Awesome, Rainbow celebrates the pirate parrots' regained confidence by surrounding their airship with a rainboom, unintentionally leading Tempest Shadow and Grubber to them.

Reuse of animation in commercials

In There's a Pony For That, clips from Sonic Rainboom of Rainbow Dash performing a sonic rainboom are played.

In the Saturday Girls Block promo, clips from Sonic Rainboom of Rainbow Dash performing a sonic rainboom are played.

The "rainbow colored shockwave ring" effect is used again in different episodes. When the ponies use the Elements of Harmony to defeat Discord in The Return of Harmony Part 2, a similar ring emanates from them when they activate the Elements' magic. In Lesson Zero, Rainbow Dash demolishes a broken-down barn for Applejack by flying into it. Dash crashes into the barn, creating a colorful mushroom cloud and a ring-shaped shockwave much like that of the sonic rainboom. The sound effect is also re-used for the shockwave which removes the changelings from Canterlot, Discord's defeat, and Philomena's regeneration and related 'Magic' sounds associated with the sonic rainboom are also used in other places.

In Princess Twilight Sparkle - Part 2, Twilight Sparkle performs her own version of the sonic rainboom during the Summer Sun Celebration. The shockwave it produces has the same shape and color as her cutie mark.

Human Rainbow Dash does a similar effect to the rainboom in the My Little Pony Equestria Girls: Rainbow Rocks animated short Guitar Centered when she stomps her feet while playing guitar.

In Twilight's Kingdom - Part 2, the ponies create a rainboom-like effect after they defeat Lord Tirek and restore the magic and cutie marks of the Earth ponies, Pegasi and unicorns while under the effect of Rainbow Power.

In the My Little Pony Live Show, Rainbow Dash describes her plan to impress the Wonderbolts at the Grand Galloping Gala. The plan is similar to the one she describes in The Ticket Master, but its grand finale is the sonic rainboom rather than the buccaneer blaze.

A sonic rainboom is involved in The Magic of Friendship, a story stated to take place when Twilight Sparkle and Spike are new to Ponyville. In the story, Rainbow Dash performs a sonic rainboom in the process of saving Applejack from being hit by barrels. Pinkie Pie reacts to this by shouting "Wow! A sonic rainboom!" while jumping up and down.

The objective of Rainbow Dash's Rainboom Game is for Rainbow Dash to create a sonic rainboom to decorate the sky (specified in the original version to be after the wedding ceremony of Princess Cadance and Shining Armor), as she does in A Canterlot Wedding - Part 2.

According to The Wonderbolts Academy Handbook, Wonderbolts flight choreographer Commander Easyglider invented the sonic rainboom. Fleetfoot's bio states that she and Soarin have also performed it. 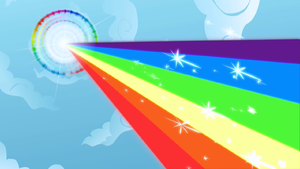