Sounds of Silence, titled Sound of Silence by Boomerang TV listings on Foxtel, is the twenty-third episode of season eight of My Little Pony Friendship is Magic and the one hundred and ninety-second overall. The title is a reference to the 1964 Simon & Garfunkel song "The Sound of Silence" and/or their 1966 studio album Sounds of Silence.

In this episode, Fluttershy and Applejack journey to the edge of the map on a friendship quest to help a group of ponies called Kirin, who are so afraid of hurting each other's feelings that they've taken a vow of silence.

A clip of the episode was shown at the 2018 San Diego Comic-Con.

This episode aired on August 24, 2018, on Nickelodeon in Denmark, Norway and Sweden, thirty-six days ahead of its scheduled premiere on Discovery Family. It also aired on Boomerang in Australia on September 1, 2018, on Carousel in Russia on September 19, 2018, on MiniMini+ in Poland on September 23, 2018, and released on Ruutu's on demand service on September 22, 2018.

As of this episode, the Hasbro Studios logo at the end of the closing credits is replaced by the new Allspark Animation logo.

When asked on Twitter in October 2018 about male Kirin, supervising director Jim Miller replied, "The only difference is the eyelashes. We didn't have time/resources to build full different male Kirin models."[1] In a November 2018 Q&A on Twitter, Miller stated that he wanted to include the Kirin in the show ever since character designer Rebecca Dart sent him her initial designs.[2]

The scene when Applejack and Fluttershy arrive at the "end of the line" reappears in Harvesting Memories.

The Peaks of Peril

At the Castle of Friendship, the Cutie Map has summoned Applejack and Fluttershy for their second friendship mission after their previous mission to Las Pegasus. This time, the Map is sending the two to a remote location in Equestria called the Peaks of Peril. Twilight Sparkle explains that the Peaks are inhabited by a race of kind and honest creatures called Kirin and frightening monsters of living fire called Nirik. Despite Fluttershy's reservations about going, Applejack is certain that they can solve whatever friendship problem they have been summoned for.

When Applejack and Fluttershy arrive at the Peaks of Peril train station, a deranged ticket-selling pony warns them that only uncharted territory and wild beasts await them beyond the station. Applejack wants to reach the top of the Peaks as soon as possible, which involves trekking through miles of hazardous terrain, but Fluttershy stops to interact with the local animals. After a brief breakdown in communication, Fluttershy shows Applejack a shortcut through the mountains that the animals told her about.

Applejack and Fluttershy end up in a small village where they encounter the pony-like Kirin. However, when they try to communicate, the Kirin are completely silent and expressionless, responding only to yes-or-no questions. Unable to figure out what the friendship problem is, Applejack asks if there's anyone in the area that she can talk to, and the Kirin point her on a path leading out of the village. Applejack decides to investigate while Fluttershy stays in the village to try and get more information from the Kirin.

On the outskirts of the Kirin village, Applejack runs into yet another Kirin. She gets frustrated when this Kirin appears just as silent as the others, but the Kirin is revealed to actually be very talkative. Excited to finally be able to talk to someone, the Kirin introduces herself as Autumn Blaze and takes Applejack to her small cottage home that oversees the entire mountain range. She states that she hasn't talked to anyone ever since she and her fellow Kirin took a vow of silence.

Through song, Autumn Blaze explains that the Kirin were once very sociable creatures that loved to talk, sing, and tell jokes. However, a fight broke out between two Kirin one day, and hurtful words were exchanged. The two Kirin's bodies were ignited in fire by their anger, and their arguing quickly spread to the rest of the village, causing everything to go up in flames. To prevent this from happening again, the village leader Rain Shine ordered the Kirin to step through the Stream of Silence, suppressing their voices and emotions.

Though the village was rebuilt and peace was restored, Autumn Blaze grew bored of the endless silence. One day, she stumbled into a bed of foal's-breath flowers, and she brewed them into a tea that restored her ability to speak. Once again able to express herself vocally, she tried numerous times to talk to her friends, but they rejected her. Rain Shine eventually forced Autumn Blaze to choose between staying with the Kirin in silence or keeping her voice and leaving the village, and Autumn chose to leave.

Applejack, shocked to learn that the Kirin suppressed their emotions just to avoid hurting each other, realizes this is the friendship problem that she and Fluttershy were summoned to solve. She decides to talk to the Kirin and convince them to restore their voices and let Autumn Blaze return to the village, but Autumn says she used all the foal's-breath flowers to restore her own voice and no new flowers have grown since then. Applejack promises to solve this dilemma and heads back to the village.

Back at the Kirin village, Applejack regroups with Fluttershy, who has also figured out what the friendship problem is. Fluttershy explains much of what Applejack already found out from Autumn Blaze: the Kirin are usually kind and peaceful, but when they lose their temper, they transform into Nirik—creatures of fire and pure rage. Applejack thinks the Kirin shouldn't stop communicating just to avoid hurting each other's feelings, but Fluttershy thinks they should or else they'll risk destroying their village again and endangering the surrounding forests and animals.

Fluttershy is surprised that a Kirin has learned to control their anger, and Autumn Blaze says having emotions is not dangerous—what matters is what one does with them. Autumn addresses her old friends and mentions the laughs and songs they used to share. Applejack and Fluttershy agree that giving up one's emotions just to avoid feeling anger is no way to live and that friends can argue from time to time as long as they don't let it get in the way of their friendship.

Applejack apologizes to Fluttershy for getting upset with her earlier, pointing out that her kindness toward the animals helped them find the flowers. Fluttershy points out, however, that Applejack's honesty with the Kirin led to them seeking out the flowers in the first place. The two make amends for their earlier arguments.

"Guess it's a good thing the map sent both of us, huh?"
— Applejack

Applejack and Fluttershy bring the flowers back to the Kirin village, and Autumn Blaze drops the flowers into the Kirin's drinking water. Upon drinking the water, the Kirin are cured of their silence and able to speak again. Rain Shine thanks Autumn Blaze for helping her and the other Kirin realize anger is a natural part of who they are, and she invites Autumn to move back into the village. Overjoyed, Autumn Blaze sings a reprise of her song from earlier, and Applejack and Fluttershy's cutie marks glow to indicate their friendship mission is a success.

Twilight Sparkle: I can't believe you two are going on a friendship quest! This is amazing!
Applejack: What do you mean, Twilight? We've been on one together before.
Twilight Sparkle: Exactly! This is the first time the map has teamed up the same ponies for a second quest!

Fluttershy: The Peaks of... P-P-Peril?!
Applejack: Aw, it's just a name. It doesn't mean anythin'.
Fluttershy: Like how Cloudsdale is in the clouds and the Crystal Empire's made of crystal?
Applejack: Fair point.

Ticket Taker Pony: I'm not used to seeing anypony taking the train to... [ominously] the end of the line. The final destination. The last stop!
Applejack: We get the picture.

Applejack: How are we gonna solve a friendship problem if none of 'em will tell us what it is?

Applejack: Oh, for the love of Celestia! Can't ya just say somethin'?!
Autumn Blaze: [giggles] Gotcha! Sorry, sorry, but that was too good. Oh, you don't know how much I missed jokes. Hi-larity! Am I pronouncing that right? Some words I haven't said in a will. While! While. Hi, I'm Autumn Blaze. You've just arrived, and perhaps you're tired or hungry or reflective and want to sleep and eat and journal? Which you should do, of course! But first— Oh! Oh, what joy to talk with another creature! It's been so long! You must tell me everything about you! There's so much to say, so much to do! Oh, look at me. I'm going on, and you haven't seen— I mean, have you seen—? W-What am I saying? Of course you haven't. So just— I— yeah— I will j— Follow me!
[beat]
Applejack: That... was somethin', all right.

Applejack: That's no reason to stop talkin'.
Fluttershy: Yes, it is! Fire is dangerous, especially in a forest like this. Why, think of all the animals it could hurt.
Applejack: Not if they don't turn into fire-breathin' Nirik in the first place.
Fluttershy: And how can you be sure that won't happen?
Applejack: There's gotta be a better way than givin' up all your feelin's!
Fluttershy: Applejack! You're not listening!
Applejack: 'Cause you're not talkin' any sense!

Fluttershy: I thought Niriks were dangerous when they're angry. How did you know you could control your temper?
Autumn Blaze: I didn't. Huh. I guess anger's like other feelings. It's not about having them. It's what you do with them.
Applejack: And givin' up happiness to keep away anger is no kind o' life.
Fluttershy: I never thought of it that way. I can't imagine not being able to talk to my animal friends.

Fluttershy: Everypony gets mad sometimes. Even Applejack and I argue.
Applejack: What?! When do we ever argue?
Fluttershy: [clears throat] On the way here? And about the Kirin being silent? And right now!
Applejack and Fluttershy: [growl, laugh]

Applejack: I owe you an apology.
Fluttershy: Why?
Applejack: 'Cause if your kindness hadn't made you stop to help the squirrels, we never would've found this here flower.
Fluttershy: And if your honesty hadn't convinced the Kirin to talk, we wouldn't need to find it.
Applejack: [chuckles] Guess it's a good thing the map sent both of us, huh?

Rain Shine: Autumn Blaze, you have given us a gift. The realization that anger is within us, but it is our choice how we let it out. We would very much like it if you came back to live with us. I can't say how much we've missed your beautiful voice. 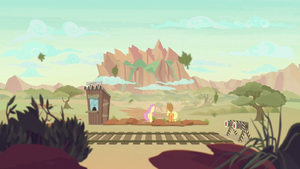