Sour Sweet is a female human and one of the Crystal Prep Academy Shadowbolts in My Little Pony Equestria Girls: Friendship Games.

Sour Sweet appears in My Little Pony Equestria Girls: Friendship Games as a member of Crystal Prep Academy's sports team, the Shadowbolts. She complains when Twilight Sparkle accidentally cuts in front of her on the bus to Canterlot High School, and she continues to act hostile towards her after Twilight offers to let her go ahead.

Sour Sweet participates in the Academic Decathlon of the Friendship Games, being paired up with Sunny Flare during the woodcutting portion, and failing the spelling bee portion.

Principal Cinch assigns her and Twilight to the archery portion of the Tri-Cross Relay, where she swiftly and expertly hits a bull's-eye. She is infuriated when Twilight struggles to keep up and wastes their team's early lead, and she gives her a backhanded compliment for taking their opponent Applejack's advice. After Twilight finally hits a bull's-eye, Sour Sweet becomes visibly disturbed when Twilight's dog Spike demonstrates the ability to speak and congratulates her.

During the final event, Sour Sweet joins Principal Cinch and the other Shadowbolts in pressuring Twilight into releasing the magic she collected throughout the Games, and she watches in horror as the magic transforms Twilight into the monstrous Midnight Sparkle. As Midnight slowly destroys the world around her, Sour Sweet and her teammates help save their fellow students and the Wondercolts, pulling up one of Crystal Prep's students with Pinkie Pie's assistance.

After Twilight returns to normal, Sour Sweet remorsefully admits the Shadowbolts' responsibility for what happened, accepting some of the blame before bitterly pinning most of it on Cinch. She and Upper Crust are later shown speaking with Dean Cadance before leaving with the rest of Crystal Prep's students.

In the half-hour special Dance Magic, Sour Sweet appears with Lemon Zest, Sunny Flare, and Sugarcoat competing with the Rainbooms in a music video contest. They later decide to join forces with the Rainbooms to film the Dance Magic music video in which she wears a disco outfit. She appears to act as the de facto leader of the group in this special.

In the half-hour special Mirror Magic, Sour Sweet briefly appears performing in the Dance Magic music video as it is being played at the Canterlot Mall.

In the novel Twilight's Sparkly Sleepover Surprise, Sour Sweet appears alongside Sugarcoat and Sunny Flare to taunt Twilight and sabotage her friendship with Sunset Shimmer and her friends. Behind closed doors, however, her own friendship with Sugarcoat and Sunny Flare is dysfunctional. By the end of the book, she changes her attitude towards Twilight and her new friends and begins acting nicer.

Sour Sweet appears in the Equestria Girls mobile app, and as a playable character in Hasbro's Archery Game.

She's always ready to let someone know when their behavior isn't appropriate – she's not afraid to call people out. She can be sarcastic and lacks team spirit.[1]

Applejack. Sour Sweet. They’re both fast. They’re both strong. Both of them tell it like it is. But when the Friendship Games start, there’s only one winner. Who do you think will be victorious?[2]

At least two Equestria Girls dolls of Sour Sweet were released as part of the toyline's Friendship Games lineup: a "Sporty Style" variant and a "School Spirit" variant. The Sporty Style doll comes with a bow and arrow. Sour Sweet's description on the back of her Sporty Style doll's packaging reads, "Practice proper form!" Sour Sweet also appears in Hasbro-licensed merchandise by Fashion Angels.

True to her name, Sour Sweet has somewhat of a bipolar personality where she alternates between being sarcastic and rude (sour) and obnoxiously nice (sweet). This trait is more subdued in her later appearances.

She acts mean towards Twilight throughout Friendship Games, irritated by her thoughtless and clumsy behavior, which she believes will cost her team's victory in the games. Much like the rest of her school, Sour Sweet is highly competitive and confident in her athletic skill, and she is willing to use peer pressure against Twilight to manipulate her into using magic for Crystal Prep's benefit. After this ends up endangering both schools, Sour Sweet becomes remorseful and helps rescue her classmates alongside Canterlot High's students.

In Dance Magic, Sour Sweet is initially conniving and deceitful, demonstrated when she steals Rarity's video idea for the contest. Her reasons for doing so, however, indicate that she cares about her Crystal Prep friends and classmates, and she shows a much friendlier side toward the Rainbooms in the end, especially with Rarity.

"[sweetly] You are such a sweetie! [sourly] I am watching you!"
— To Sci-Twi, My Little Pony Equestria Girls: Friendship Games

"[sweetly sarcastic] That makes perfect sense! Don't aim at the target! Thanks so much!"
— To Applejack, My Little Pony Equestria Girls: Friendship Games

"[sweetly] Actually, we're all to blame. [sourly] Mostly it was her."
— Referring to Principal Cinch, My Little Pony Equestria Girls: Friendship Games

"So what did you think of our routine? Scared yet?"
— My Little Pony Equestria Girls: Dance Magic

"Rarity is creative. She'll come up with something else. But if we don't, we have nothing. And imagine what our classmates would say."
— My Little Pony Equestria Girls: Dance Magic

"But that's not who we are. ...Anymore."
— My Little Pony Equestria Girls: Dance Magic

"Hi, I'm Sour Sweet. It's good manners to help each other out!"
— Equestria Girls app 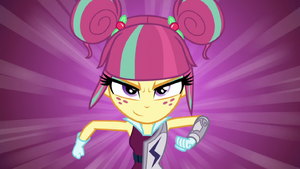