The spa ponies, Lotus Blossom and Aloe, are two female Earth ponies who work at their co-owned[4][5] Ponyville Day Spa. In some credits and different merchandise, Lotus Blossom is called Lotus Bloom or simply Lotus, and Aloe is called Aloe Vera.

Their appearance is similar to the babies of the G1 Surprise Twins Pony, and they share that color scheme. They also share the color scheme of the G2 Rose and Lily. They share Rarity and Octavia Melody's eye design, excluding the iris.

Lotus Blossom first appears in the episode Bridle Gossip, and later they appear together in Green Isn't Your Color. In the former episode, Lotus only appears briefly in the final scene, asking Zecora for the ingredients of her herbal bath. She speaks with a Swedish accent.

The spa offers many services in Green Isn't Your Color, such as massages, mud baths, seaweed bath wraps, steam rooms, and even horn filing for unicorn ponies. Rarity comes in for her "usual" and returns for a second time as soon as she's finished. Aloe does not seem to notice that Fluttershy is not a unicorn pony when she attempts to give her a horn filing regardless before realizing her mistake.

Lotus Blossom and Aloe also appear in A Friend in Deed where they give Cranky Doodle Donkey a service as a gift from Pinkie Pie.

Lotus Blossom later appears in Ponyville Confidential, where she attempts to give Rainbow Dash a hooficure, which she refuses hastily.

Both spa ponies appear in Filli Vanilli, requesting the Pony Tones to sing at their spa.

Aloe and Lotus Blossom appear in Castle Sweet Castle when Twilight Sparkle and Spike visit the day spa. Aloe has her first in-show speaking role in the episode, the credits of which refer to her simply as "Spa Pony". Both also appear in Slice of Life. Lotus has her second in-show speaking role in the episode. The credits name Lotus Blossom as in previous materials. Both appear in the final group shot during Friends Are Always There For You in The Cutie Re-Mark - Part 2.

Lotus Blossom appears in Grannies Gone Wild as she enters the line for the Wild Blue Yonder rollercoaster.

In The Beginning of the End - Part 2, both Aloe and Lotus Blossom get brainwashed by King Sombra into invading Canterlot. Eventually, they get freed from Sombra's mind control after the Mane Six defeat him. In She's All Yak, they both appear in the reused image of The Cutie Re-Mark - Part 2 during Fit Right In, and appear in the Ponyville Spa wearing hazmat suits while washing Yona.

Aloe and Lotus appear in Between Dark and Dawn, giving Princess Luna and Princess Celestia makeovers. In Dragon Dropped, Aloe and Lotus both appear in a flashback tending to Rarity and Spike. In The Big Mac Question, Aloe appears kicking Sweetie Belle out of the spa for disturbing a spa patron. In The Ending of the End - Part 2, Aloe and Lotus take shelter with the other Earth ponies as Ponyville closes itself off from the other pony races. In The Last Problem, Aloe and Lotus briefly appear in Rainbow Dash's group shot during The Magic of Friendship Grows.

Aloe and Lotus Blossom both appear with speaking lines in the clip show episode Deep Tissue Memories. In the closing credits, Aloe's name is listed as "Aloe Vera".

In the Rarity ending of the My Little Pony Equestria Girls: Choose Your Own Ending short Driving Miss Shimmer, Rarity gets a massage from Aloe's human counterpart.​[​dubious – discuss‍​]​

"Quake", a masseuse pony, is shown working at the spa in Green Isn't Your Color, giving Rarity a massage, and in Ponyville Confidential, giving Applejack a massage. A male[6] unicorn version of Quake appears in Princess Spike giving Spike a massage.

"Frou Frou", a background pony that shares Lotus Blossom and Aloe's tail style, cutie mark design, and accessory design, appears running and crying out of Carousel Boutique in The Show Stoppers when the Cutie Mark Crusaders ruin her mane.

Roxie Rave appears as a member of Photo Finish's entourage in Green Isn't Your Color, behind the day spa counter in A Friend in Deed, and out of focus in Equestria Games.

Five Crystal Ponies are shown working at a spa in the Crystal Empire in Games Ponies Play. Of these five, "Rose Quartz" appears again in The Crystalling - Part 1, and Honeysparkle and Golden Glitter appear again in The Times They Are A Changeling.

Additionally, Bulk Biceps is seen working at the Ponyville spa in Castle Sweet Castle, Applejack's "Day" Off, and All Bottled Up, providing "extra-strength" massages.

"Lavender Essence" appears in No Second Prances and She Talks to Angel, and has a speaking role in Applejack's "Day" Off. A male unicorn spa pony also appears in the latter episode.

In Rarity's Biggest Fan, Aloe and Lotus Blossom appear tending to Twilight Sparkle and Rarity at the spa.

On My Little Pony: Friends Forever Issue #9 page 3, Lotus Blossom and Aloe appear as attendees of Apple Con 45. On Issue #10 pages 14–15, they give spa treatments to Fluttershy and Iron Will.

In My Little Pony: Ponyville Mysteries Issue #4, Aloe and Lotus Blossom become the victims of theft when the spring water they use for their spa's steam baths is siphoned off by Flim and Flam.

In the chapter books, Aloe (unnamed) and Lotus Blossom appear in chapter 10 of Rarity and the Curious Case of Charity, and Aloe appears in chapter 14 of Applejack and the Honest-to-Goodness Switcheroo.

Hasbro's online game My Little Pony Friendship Express Train™ Puzzle Adventure shows Lotus Blossom with Twilight Sparkle in a screenshot from Ponyville Confidential. The game was released earlier than the episode was.

A mini-figure of Aloe is included in the Aloe Boutique Spa playset, which comes with a vanity bath and spa-themed accessories.

Aloe and Lotus Blossom appear in the Comic Con 2011 poster in front of the Shadowbolts.

Aloe and Lotus Blossom appear in the My Little Pony First Look and Find book.

On page 73 of The Ultimate Guide: All the Fun, Facts and Magic of My Little Pony, Lotus Blossom is named "Lotus Bloom".

"Miss Zecora, I would love to get the recipe for this bath. It's simply luxurious!"
— Lotus Blossom, Bridle Gossip

"You must relax, my dear! We can handle anything! We once did a pony's hair during the ceremony!"
— Lotus Blossom, Slice of Life

"Um... Miss Rarity? Eh, how much longer are you planning to stay in here, darling?"
— Aloe, Applejack's "Day" Off

"It's Spike the Brave and Glorious!"
— Honeysparkle, The Times They Are A Changeling

"Princess Celestia! It's been so long since we've seen you! Welcome!"
— Micro-Series Issue #10 page 6

Aloe: But rejuvenation starts with ingredients from zee earth!
Lotus Blossom: Without zee elements of nature, no pony would have had zee fortitude to build a shop!
Aloe, Lotus Blossom, Matilda, and Cranky Doodle Donkey: The plaque should be at Sweet Apple Acres!

Aloe: After being covered in pie, I would think some of these ponies would be more agreeable to a mud bath!
Lotus Blossom: Let's go back to zee spa and get zee mud prepared!

Aloe: A special spa package for attendees? We do seek to rejuvenate!
Lotus Blossom: Yes, yes!

"Oh, Twilight! There are so many ponies in zee mud bath that we are running out of mud!"
— Aloe, Friendship is Magic Issue #31 page 14

Rarity and the Curious Case of Charity

"Wouldn't you prefer a seaweed wrap and deep coat cleansing instead of all this fuss? But of course you would!"
— Enterplay collectible card game Absolute Discord #64 R card of Aloe 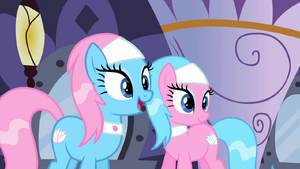