Sparkle's Seven, also titled Twilight's Seven by some sources and in the episode's script,[1] is the fourth episode of season nine of My Little Pony Friendship is Magic and the show's two hundredth episode overall,[2] celebrated as a milestone episode. The title is a reference to the 1960 film Ocean's 11, its 2001 remake, and/or the all-female spin-off to the latter Ocean's 8, previously referenced by "Sparkle's Six" in Twilight Sparkle and the Crystal Heart Spell and "Luna's 5" on the My Little Pony: Nightmare Knights Issue #1 cover RI.

In this episode, Twilight Sparkle and Shining Armor pit their wits against each other to settle a long-standing sibling rivalry, but they soon discover they are not the only competitors.

According to Jim Miller on Twitter, this episode "is a thank you to the 5 voice actresses who brought us this far".[3]

On April 13, 2019, Miller explained, "Back in the fall of 2017, we got [Andrea Libman], [Ashleigh Ball], [Tabitha St. Germain], [Cathy Weseluck] and [Tara Strong] (via Skype) in a boardroom at DHX, and asked them to tell us the things they’d always wished their characters had been able to do, but had not yet done on their series."[4] "There were a lot of great, fun and funny ideas! We narrowed them down to the ones we liked best and [Josh Haber] and [Nicole Dubuc] went off and wrote a great script that incorporated those ideas in to a cohesive narrative."[5] "The end result is another unique, and dare I say especially funny, episode. All the voice actresses who helped us out are receiving a “Story by” credit."[6]

To clarify, Miller explained that St. Germain came up with the concept of Rarity organizing a heist, Strong developed the rivalry between Twilight and Shining Armor, Libman wanted Pinkie to go to space and Fluttershy to be a super spy, Ball had Rainbow Dash interact with Zephyr Breeze and Applejack's country singer alter ego, and finally, Weseluck suggested Spike's relationship with Twilight as a sibling surrogate.[7]

A behind-the-scenes look into the episode's production, including interviews with the writers and voice cast, was uploaded to the My Little Pony Official YouTube channel on April 19, 2019, one day prior to the episode's premiere.[8]

According to Miller, the sequence of Pinkie Pie in space was designed to resemble the art style of Le Petit Prince.[9] The episode was titled "Twilight's Seven" in the script, but it was changed to "Sparkle's Seven" for broadcast.[1]

The scene when "Apple Chord" distracts the guards reappears in Harvesting Memories.

At the School of Friendship, Spike excitedly enters Twilight Sparkle's office with a recently-arrived scroll from Twilight's brother Shining Armor. The scroll depicts a toy crown, and Twilight immediately realizes what it means. They explain to Starlight Glimmer that Twilight and Shining Armor had frequent competitions when they were little, including kite-flying and getting good grades, and whoever won the most competitions at the end of each week would earn the crown as well as the title of "Sibling Supreme"—a title that Spike has also long coveted.

Upon arriving at Canterlot Castle, Twilight and Spike meet with Princess Celestia, Princess Luna, and Shining Armor—wearing the Sibling Supreme crown. They explain that, in the wake of King Sombra's recent return, they have decided to reinforce the castle's defenses. Despite Luna's insistence that they handle the task themselves, Celestia has appointed Shining Armor for the task, and he needs someone to test the new defense systems.

Among Shining Armor's new castle defenses are an anti-magic field made from the shards of Queen Chrysalis' throne, giant fans that prevent getting in from the air, brick walls over the entrances to the castle's underground tunnels, doubled and round-the-clock royal guard security, doors that only open with royal guard medals, a trap door, and an alarm system of geese. Shining Armor tells Twilight that if she can get past all these defenses and steal the crown without getting caught, she will earn the title of Sibling Supreme forever.

Back at the Castle of Friendship, Twilight explains the situation to her friends and organizes an elaborate heist to steal the crown, and her friends agree to help pull it off. Playing to everyone's strengths, Twilight tasks Pinkie Pie with distracting the guards with a party, Applejack with breaking into the underground tunnels, Rainbow Dash with getting past the blowing fans, Rarity with making guard costumes, and Fluttershy with charming the geese. Unfortunately, Shining Armor sends another scroll and says he has already predicted and accounted for all of these measures.

Rarity suggests doing the opposite of what Shining Armor expects them to do, and she takes charge of the operation, telling each of the ponies to come up with their own part of it. She and Rainbow Dash decide to interrogate the local bar scene about other secret passages into the castle tunnels. Pinkie Pie decides to serve as the team's lookout—from outer space. Applejack offers to distract the guards with her country music-singing persona "Apple Chord". Fluttershy and Spike offer to infiltrate the castle like super-spies. Finally, Rarity tells Twilight to do nothing whatsoever.

When a heist goes wrong

Using the Twinkling Balloon and a flight path provided by the Wonderbolts, Pinkie Pie drops Fluttershy and Spike off so they can enter the castle through the vents before she goes up into the clouds. On the ground, Shining Armor finds Twilight hanging out outside the castle and suspects she is up to something, but Twilight denies it. All of a sudden, Pinkie goes flying out of control when her hot air balloon springs a leak. Applejack takes advantage of the distraction this causes to steal one of the guards' medals.

Meanwhile, Rarity and Rainbow Dash head to a nearby juice bar to "shake down ne'er-do-wells for information", but the bar is closed. A local stallion points them in the direction of a blocked-off entrance into the underground tunnels, but it is guarded by the recently-hired Zephyr Breeze. Remembering Zephyr's big crush on Rainbow, Rarity outfits her in a pretty dress and convinces her to distract Zephyr by swooning over him. With Zephyr pulled away from his post, Rarity unseals the entrance into the tunnels.

Elsewhere, Fluttershy and Spike infiltrate the throne room via stained glass window and try to steal the crown, but they quickly alert the geese. As the geese honk loudly, Fluttershy and Spike trigger the trap door near the thrones and fall inside. When Luna comes to investigate and finds the throne room empty, she believes it to be a false alarm. With no lookout, no distraction, and no word from the ponies inside the castle, Twilight fears the entire heist is a failure.

Inside the trap door under the throne room, Fluttershy succumbs to claustrophobia, remembering the time she got similarly trapped in the Castle of the Two Sisters and was separated from Angel. She recalls fearing that Angel felt alone and forgotten, and Spike sympathizes, having always felt like Twilight and Shining Armor's little brother during their sibling rivalries but unsure if they felt the same way about him. Fluttershy assures Spike that he is special to Twilight and Shining Armor, mentioning that her own brother Zephyr Breeze could learn a lot from him about being a brother.

Just then, an entrance from the trap door into the underground tunnels opens when Rainbow Dash pulls a torch lever, and she and Rarity reunite with Fluttershy and Spike. Unable to navigate the maze-like tunnels, the group decides to turn back and meet up with the others to reevaluate their plan.

Back outside the castle, Twilight nervously paces back and forth while waiting to hear from the rest of their friends. When Rarity and the others appear from inside a vent, they inform Twilight that their parts of the plan all failed as well, and Twilight despairs that she will never get the crown. Spike suggests they go back to Twilight's original plan, even though Shining Armor is expecting it. With the rest of her friends in agreement, Twilight decides to give it a shot and thanks Spike for the well-needed encouragement.

"What are little brothers for?"
— Spike

In accordance with Twilight's original plan, Pinkie Pie distracts the guards with a party, Rainbow Dash carries Fluttershy as she zooms past the blowing fans, Applejack breaks into the sealed-up underground tunnels with assistance from Maud Pie, Rarity poses as a royal guard to get past security, and Fluttershy calms down the honking geese. Once inside, everyone regroups in the throne room, and Twilight sees the crown within sight. Unfortunately, Shining Armor appears to stop them, having predicted Twilight's whole plan as he previously warned.

Just before Celestia can declare Shining Armor as permanent Sibling Supreme, Spike holds the crown for himself, having conspired with Princess Luna the entire time. He explains that he sensed Celestia and Luna's disagreement regarding castle security earlier and made a deal with Luna. She deliberately appointed Zephyr Breeze to guard the tunnels and kept Celestia out of the castle hallways, while Spike sabotaged Pinkie's hot air balloon and made sure the Mane Six went back to Twilight's original plan. Finally, during Shining Armor's victorious gloating, Luna teleported the crown directly into Spike's hands.

Celestia half-heartedly apologizes to Luna for disregarding her earlier concerns and begrudgingly agrees that they need to account for both inside and outside threats to castle security. With both Twilight and Shining Armor having lost the competition, they declare Spike to be the true Sibling Supreme and the little brother they have always had, and everyone gathers around him for a group hug.

Starlight Glimmer: Uh, I don't. What's so exciting about a toy crown?
Spike: [laughs] This is no "toy crown". It's the hard-won helm of the Sibling Supreme!
Twilight Sparkle: When Shining Armor and I were small, we competed over everything.

Applejack: Of course, Apple Chord could come out of retirement for a farewell concert this one time.
Rainbow Dash: Wait. Did you just make all that up, or did that actually happen?
Applejack: Um...

Twilight Sparkle: Mm-mm. I guess I'm the only one left that still needs a plan.
Rarity: [laughing] Oh, no, darling. That is the plan. You shall do nothing!
Twilight Sparkle: [gasps]
Spike: Shining Armor definitely won't expect that.

Twilight Sparkle: Where's Spike and Fluttershy? Did they make it into the castle?
Pinkie Pie: They jumped out right before the balloon went [blows raspberries] but that's all I could see without being in space, where I didn't get to go!

Fluttershy: Once, I got trapped in the Castle of the Two Sisters, and Angel Bunny and I were separated! Now whenever I'm in a tiny room, it's all I can think about! I was so worried he felt alone and forgotten!
Spike: [sighs] I know that that's like.
Fluttershy: What do you mean?
Spike: I was always excited to be a part of Twilight's and Shining Armor's rivalry, like I was their little brother. But they never really thought of me that way.
Fluttershy: I know they both have a special place in their heart for you, but sibling dynamics are hard. Trust me.

Rarity: I am sick of being lost in these slimy corridors, too! But you shouldn't pull every lever you come across! Half of them are traps!
Rainbow Dash: And the other half might open a secret passage to the castle!
Rarity: It's not worth the risk! Oh, hello, Spike. [to Rainbow Dash] Even if we did find our way back to the castle, we'd still have all of those guar— Spike? Fluttershy?! 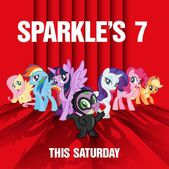