Spearhead is a male Pegasus pony and supporting character who appears in the season five episode Rarity Investigates! and the season seven episode A Flurry of Emotions. He is a Canterlot royal guard-turned-artist and an old friend of Shining Armor's.

Spearhead first appears in the season five episode Rarity Investigates! as a member of the Canterlot Royal Guard. He appears on duty during a castle dinner on the night before Princess Celestia's royal garden opening, and he is one of the three guards that Rainbow Dash and Rarity interrogate during their investigation of Spitfire's disappearance.

Spearhead later appears in the season seven episode A Flurry of Emotions. Having left the royal guard to become an artist, he opens a pop-up art exhibit at the Ponyville Cafe, attended by his old friends Shining Armor and Princess Cadance. Some of Spearhead's art pieces are themed around his time in the royal guard, such as "A Thousand Nights in a Hallway" and "A Kitchen Guard's Journey".

When several of Spearhead's works remind Shining Armor and Cadance of their time together with Flurry Heart, Spearhead allows the two to leave the exhibit early and pick up their daughter from Twilight Sparkle.

Spearhead is a character in Gameloft's mobile game.

"There are only two rooms in the northwest wing: yours and Spitfire's. So the only other pony who had access to that wing was you."
— To Rainbow Dash, Rarity Investigates!

"Except for last night when somepony was nice enough to leave a cake for us. So we did take one little break when we ate that cake."
— Rarity Investigates!

"How are the new 'rents? Gimme some hoof."
— To Shining Armor and Princess Cadance, A Flurry of Emotions

"Art can be anything that speaks to you. It changed my world."
— A Flurry of Emotions

"[seriously] There is none more dark."
— A Flurry of Emotions

"Art is so evocative! I wasn't even going for that memory! Score!"
— A Flurry of Emotions

"My art has always spoken to me about what I love. But knowing that it spoke to you about what you love... speaks to me."
— A Flurry of Emotions 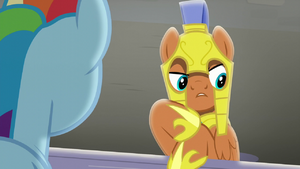 Retrieved from "https://mlp.fandom.com/wiki/Spearhead?oldid=2160981"
Community content is available under CC-BY-SA unless otherwise noted.