Spice Up Your Life is the twelfth episode of season six of My Little Pony Friendship is Magic and the one hundred and twenty-ninth overall. It marks season six's midseason finale. The title is a reference to the Spice Girls song of the same name.[1]

In this episode, Rarity and Pinkie Pie are called to Canterlot by the Cutie Map to help a struggling father-daughter family restaurant.

In production order, this is season six episode thirteen.[2][3]

The episode begins with the Mane Six, Starlight Glimmer, and Spike in the Castle of Friendship throne room. Twilight Sparkle notes that the Cutie Map has not sent her or her friends on any friendship missions since Starlight used it to travel back in time. Luckily, through Twilight and Starlight's collaborative research, they have found a spell to get it working again.

Using their magic, Twilight and Starlight reactivate the map. Almost immediately, it summons Pinkie Pie and Rarity to Canterlot, causing Rarity to get overexcited.

Upon arriving in Canterlot, Rarity recommends starting their search for a friendship problem at the castle, but Pinkie proposes that they simply "go with the flow" and let a friendship problem find them. When Pinkie's stomach growls, Rarity suggests they begin with lunch, and she takes Pinkie to Canterlot's "Restaurant Row", home to some of Equestria's most renowned establishments of fine dining.

As Rarity points out, most of the restaurants in the area have a "three-hoof rating" given by famous food critic Zesty Gourmand, whose opinion can make or break a restaurant's success. However, several of Rarity's restaurant choices offer poor-tasting food and nearly identical atmospheres.

Pinkie decides to choose the next restaurant, and she follows a delicious aroma to a small yet non-rated restaurant called The Tasty Treat. Inside, they meet chef Saffron Masala, who offers them some very tasty dishes. Saffron's father Coriander Cumin, however, is ill-tempered due to the restaurant's lack of business. As a result, he and his daughter have a strained relationship, and they frequently argue.

Pinkie Pie and Rarity believe this is the friendship problem they have been summoned for: to save Saffron and Coriander's restaurant and tense relationship. Rarity offers to use her connections in Canterlot to bring Zesty Gourmand, and Pinkie offers to help advertise.

A short while later, Rarity informs Saffron and Coriander that she successfully convinced Zesty Gourmand to visit The Tasty Treat. Unfortunately, Zesty is only available that very evening, giving Pinkie and Rarity only a few hours to get the restaurant ready.

Rarity helps Coriander Cumin make the restaurant worthy of a three-hoof rating, and Pinkie and Saffron Masala drum up business in the streets. Through a Bollywood-style duet, Rarity convinces Coriander to make his restaurant just like the other establishments on Restaurant Row while Pinkie Pie tells Saffron Masala to embrace what makes The Tasty Treat unique and special.

After several hours, Pinkie and Saffron only manage to convince a tourist couple from Whinnyapolis to visit The Tasty Treat. When they return to the restaurant, they discover that Rarity and Coriander have redecorated to make it resemble every other restaurant on the block, even copying their unappetizing menus. As Pinkie and Rarity argue over their conflicting creative directions, Zesty Gourmand arrives.

With Zesty's three-hoof rating looming over them, Coriander and Saffron—and by extension, Rarity and Pinkie—argue over what food to serve. Their escalating disagreements cause a bowl of curry to spill on Zesty. After some harsh words for both Rarity and the restaurant, Zesty angrily takes her leave.

Having failed in their friendship mission, Pinkie and Rarity apologize to Coriander for ruining his restaurant. In an effort to cheer her father up, Saffron serves him a dish he used to make when she was little. The two reminisce on old times, and Saffron expresses that all she has ever wanted to do was serve food to ponies that they used to make together.

As Coriander and Saffron reconcile, Rarity realizes that Zesty Gourmand's opinion doesn't matter. She believes she and Pinkie can fix things by switching their previous roles; Rarity brings in the crowd while Pinkie returns The Tasty Treat to how it was before.

Through Pinkie and Rarity's efforts, The Tasty Treat is reverted to its former, more unique state, and numerous ponies show up for its "grand re-reopening". Saffron and Coriander thank the two for helping to revive not only their business but also their relationship.

When Zesty Gourmand wanders by the restaurant and sees its business is now booming, she enters to voice her displeasure, saying the establishment is below the standards of cuisine she has tried to set. Rarity and Pinkie argue that no one should tell other ponies what to think, not even Zesty.

Inspired by Pinkie and Rarity's words, some of the other restaurant owners decide to cook what they want instead of following strict societal trends. As Zesty brushes off their opinions and leaves, Pinkie and Rarity's cutie marks glow to signify a mission success, and the celebration inside The Tasty Treat goes on.

Twilight Sparkle: As you've all probably noticed, it's been quite some time since the map has sent us on a mission of friendship.
Spike: Yeah! Ever since Starlight messed with it to go back in time and try to change history!
Twilight Sparkle: Yes. Since then.

Rarity: Canterlot! This is wonderful! I can check the boutique! Perhaps there'll be some social events that we can attend! [gasps] I'll have to pack extra outfits! What will I wear?!
Pinkie Pie: Y'know, some ponies get excited about the silliest things.

Saffron Masala: Father, stop it! Don't close up the restaurant around our guests.
Coriander Cumin: What does it matter?! When they leave, nopony else will be coming in.
Saffron Masala: Well, your attitude isn't going to bring anyone in! Can't you at least pretend to be positive?!

Pinkie Pie: Rarity, I think that friendship problem just kablammed us right between the eyes!

Zesty Gourmand: Rarity, when it comes to fashion, you are adequate. But take some advice from a friend – keep your opinions out of restaurants. Substandard food, laughable service, and I would think even you could recognize that the decor here is trying desperately while desperately failing. Recommending a disreputable place such as this could do serious damage to your social standing.

Saffron Masala: That's all I've ever wanted to do, father! Make food for the ponies of Canterlot like the food we made together when I was younger!
Coriander Cumin: It has been so long since we cooked together. Heh. Remember how you used to hide the ingredients you did not like?

Rarity: Zesty, are you sure you wouldn't like to try the food? Ignoring a unique and fresh establishment such as this could do serious damage to your social standing.

Pinkie Pie: Nothing can stop the dynamic duo of Pinkie and Rarity! 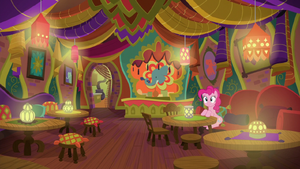 Spice Up Your Life image gallery