Yet another opening shot of Golden Oak Library.

Admiring quite a stack of books.

Spike, counting the number of books.

Twilight's got quite the reading session planned.

Twilight certainly picked a comfortable seat to stand upon!

"Are you kidding? How you supposed to read twelve books in one weekend?" Answer to your question, mate: SHE READS SIX BOOKS A DAY, DUH!

Some tea could come in handy while reading so many books.

"Well, I hope you're not planning on sleeping either."

"Why not? These books are gonna keep me busy for a while."

Spike, having just left the Library.

Spike's long list of things he wants to do... Someone else saw Fluttershy and Winona in the background?

Touch my nose with my tongue.

Play bongos on my belly.

SIMON: Spike, what can I say? Your talent is nothing I've seen before, so... congratulations! You're through to the finals of Equestria's Got Talent!

He actually enjoyed that?

The last thing on Spike's checklist.

Done already
Add a photo to this gallery

Spike walking towards the Twinkling Balloon.

This is what happens when one hangs with Derpy for too long.

Can't tell if rope is loose, or episode title is in face.

Rope is moving. That should mean something.

Uh-oh! Some baby dragon is in big trouble right now.

Spike with a towel on a roof.

Trying his hardest to stop.

That was too close.

It was Twilight Sparkle's balloon!
Add a photo to this gallery

In the Everfree Forest

Spike, tying the rope to a branch.

There, that should do it.

A nice, clear green area in the Everfree Forest...

Not exactly the safest place to be...

Spike has been engaged in a Pokémon battle!

A strange smell makes itself known.

Okay, who did that awful smell?!

Spike tripped on something.

What did Spike trip on?

The hunt begins for the Timberwolves.

The Timberwolves begin their pursuit.

Spike runs from the forest!

And he slams straight into a rock wall.

Spike is cornered by the Timberwolves.

NOW the smell is EVERYWHERE!

Spike...you DO realize you can breathe fire, right?

The Timberwolves get ready to feast on their cornered prey.

It gets hit by a ROCK! Now Filly Rarity would think that's really lame...

Good thing that Applejack is here.

Spike cowers from the Timberwolves.

Spike looks up to see Applejack atop the cliff!

Having got their attention, Applejack runs for it to distract them!

I'm asleep and a Timberwolf is on my head. All in a day's work.

Spike notices that he's no longer the focus of the Timberwolves' anger... or hunger!

Spike takes the chance to get out of there!

Applejack keeps running from the Timberwolves.

BRANCH IN THE PATH!!!

Applejack gets an idea.

She sure is a fast runner!

The branch breaks apart the Timberwolf!

Applejack's only got one Timberwolf left!

Spike's shocked about what Applejack did.

You saved my life!

When it comes to scary places, Spike looks very innocent.

Close enough to being blushed.

The Timberwolf is not yet defeated.
Add a photo to this gallery

Balloon has been returned: Mission Accomplished!

Spike enthusiastic to assist back Applejack.

Spike has a new hat.

Spike is ready to help wash the pig.

Me and the Crusaders got plans today.

What's down there, Applejack?

Those eggs are in a very peculiar location.

This is kind of...not as good as when you cook for Twilight

At your service, milady!

The Noble Dragon Code is official.

But Applejack, I need to fulfill my Dragon Code.

Spike didn't really do a good job...
Add a photo to this gallery

Twilight, focusing on her book.

Pop comes in the dragon.

I don't think she's listening to you, Spike.

I will help Applejack, like I never helped before.

..So, goodbye Twilight..
Add a photo to this gallery

Look at all the apple pies I give

Applejack is a little worried.

There's what looks like a pie on my table.

Is this pie even a pie?

Spike with his cute little smile.

This er-pie, better do me some good.

I don't think even Rhenton Sketchitt would like that pie...

Ok, you have to do this Rarity.

It's even more burnt than Sweetie Belle's cooking

That's enough pie for one day.

Someone pass Rarity a barf bag

"Aren't you gonna have some more?"

"What was that all about?"

"Forever in my debt!" (Hmm, Applejack isn't sure what to think of Rarity's expression)

"I'd get them to organize my closets."

"Help me with my sewing."

You really think that I'm enjoying this?

"Applejack saved Spike's life and now he has to serve her forever."

Count on Spike to destroy most of the things that he touches.

So AJ, how's that novel you've been working on?

How did Spike end up doing this?

That's quite a tall tower!

Wow! What are these weird thingies on my back?

Cross eyed, dazed, and looking cute in the process.

Mother of Celestia... that doesn't look...um...right

Who's a good girl?

Do you need help breathing?

Spike bowing to Applejack.
Add a photo to this gallery

Honestly thinking of something.

Hehehe, this will scare the focus out of her.

There back in order.

Really Twilight...trying to kill us with those wide eyes.

If Applejack can make her pupils dilate at will than the whole world will stop revolving.

"But this is Dragon Code we're talking about."

"Surely you know how important the Dragon Code is to a dragon."

"Can I still wear the mustache?"

What is it with this show and mustaches?
Add a photo to this gallery

Standing by, Pinkie is asking a question.

Pinkie mustache you a question, but she'll shave it for later.

Good no mustache, I guess.

Pinkie kicking the party cannon away.

OOH!! Too much cuteness! Results in cardiac arrest!!

"You must lift your foreleg up."

This is the! Worst! Possible! Thing!

Heh, it needs a wee bit of tweaking.

So bad it's good

Why you make me stop laughing?

Yeah! I nailed it.

Rarity was right, this DOES need some serious work

Ehhhhh, he's not buying it.

You expect me to buy this malarkey?

The roar was pretty good!

They come from deep inside the Everfree Forest.

The Rock Tower was a smart idea after all!

Wait, Why are you using a big rock?

This can't be good.

The feeling of real dread sets in.

Timberwolves! Now made with real timber!

Sharp, wooden teeth it has!

Big, green eyes it has!

I'll save you! No matter what!

What can you hope to accomplish with just a pebble?

Great shot, kid! That was one in a million!

A surprisingly strong stick given how thin it is.

Give me a minute.

Choking on a tiny pebble, coughing and hacking

Glad, everything is back to normal.

Twilight's bad habit of reading in the dark.

If this keeps up, she's gonna need glasses.

Spike knows it's not good to read in the dark.

Oooh, I love you too.
Add a photo to this gallery 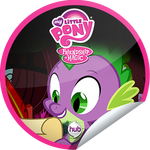 Add a photo to this gallery
Retrieved from "https://mlp.fandom.com/wiki/Spike_at_Your_Service/Gallery?oldid=2064667"
Community content is available under CC-BY-SA unless otherwise noted.